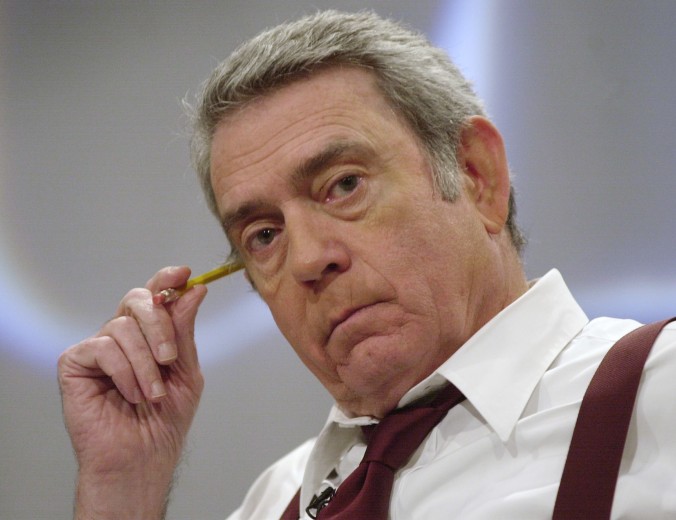 See, if Dan didn’t have that habit of using his ear as a pencil sharpener, he wouldn’t say silly things like this…

“When Trump criticizes “all types of racism” he’s using false equivalence to wink at those who peddle in the distortions of white grievance. It makes a mockery of our history and our present. It’s not calming and unifying. it’s provocative and divisive. And it’s intentional.”

—Dan Rather, in a recent tweet, signaling his virtuous acceptance of the convenient falsehood that anti-white racism isn’t racism at all.

Rather is saying it is “false equivalence” to call all forms of racism equally wrong. The level of ethical obtuseness required to make this statement is high and airless. For one thing, it is based on consequentialism, the fallacious but common misconception that the consequences of an unethical act make it more or less ethical. No one would seriously dispute that anti-black racism has more than lapped the field regarding the pain, harm and death that it has caused. That historical fact does not make anti-white racism any better, or an even-handed condemnation of both a “false equivalence.” Rather’s reasoning is poisoned  with rationalizations, like “it’s not the worst thing” and “they had it coming.”

What is dangerously “provocative and divisive” is the double standard enablers and apologists for anti-white racism are trying to justify.

Jonah Goldberg exposes ethical obtuseness of Rather and his compatriots, writing in the LA Times:

The notion that racism is solely about institutionalized white power simply doesn’t compute for most Americans. In common parlance, racism means prejudice or bigotry on account of race or skin color. Period. The pathetic racists who marched on Washington this weekend don’t have much cultural power. Surely that explains their racism more than it mitigates or absolves it…Even if we were to collectively accept that “racism” means structural oppression by whites, we’d still need a word for hating or degrading people solely on account of their race. Why reinvent the wheel? And why muddle the principle that this is bad?Think of it this way: Would you want your kids to go to a school where the white kids were taught that the slightest racial insensitivity was a profound sin but all the non-white kids were free to say whatever they wanted about the white kids?

It is right and proper to teach kids that bigotry against blacks or other particular groups is especially evil for historical reasons. But it is morally daft to celebrate or condescendingly explain away bigotry against whites as some sort of historical comeuppance for the sins — real or alleged — of their ancestors. (It’s also counterproductive: There’s ample evidence that calling non-racist people racist actually makes them more racist.)

Double standards breed resentment and rage, regardless of ideological orientation.

26 thoughts on “Unethical Quote Of The Week: Dan Rather, Ex-Respected Journalist”