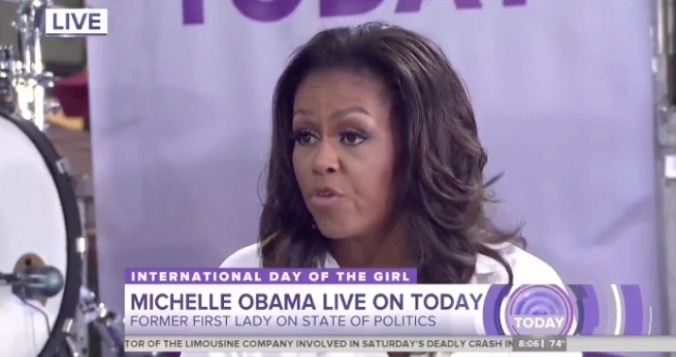 Like it or not, Michelle Obama has established herself as a cultural role model, and millions of American respect her statements and opinions and take them to heart. As clearly contrary to reality as  her now-famous “When the go low, we go high” remark was—its is difficult to remember the last time the Democratic leadership “went high”—the statement would have been an ethical one if it were true, and was still arguably aspirational, unless regards it as cynical public deception.

This week, as important voices in her party increasingly courted hate, anger and violence among members of the public in the wake of Operation Smear Kavanaugh failing so spectacularly, the former First Lady refused to encourage the mob, and told the Today Show,

Coming so soon after Eric Holder used the image of physically assaulting Republicans while explicitly rejecting Michelle’s “go high” statement,  and on the heels of Hillary Clinton’s even more direct statement that Democrats should not be civil until they have regained power, this qualified as a pointed rejection of the party’s current ugly and divisive posture.  She is one of the very few progressives with the influence and high position on the cognitive dissonance scale to have a chance to halt and even reverse the dangerous course her party’s leaders have pursued for two years. All Americans should hope that her approach wins out, because it is the only ethical course.

There is plenty of cynicism and hate to go around among the targets of Holder and Clinton’s incitements. Conservative blogger Ed Driscoll, among others, refuses to believe that Michelle is sincere, writing that she is playing “good cop.” Another prominent blogger, Allahpundit, wrote,

I don’t think Obama’s advice is really intended to be taken seriously, though. Her niche in the party at this point, and in American culture more broadly, is “role model.” Urging people not to stoop to fearmongering is precisely the sort of moral encouragement you’d want to hear from a role model, and precisely the sort of thing most of us discard instantly once real money or power is on the line. Dems will applaud her for this, and they’ll be back to demanding an uprising against Republican monsters tomorrow.

If society is at the point that a clear statement of ethical values like hers is taken that way, we are really looking into the abyss.

Incidentally, why hasn’t her husband endorsed his wife’s sentiment?