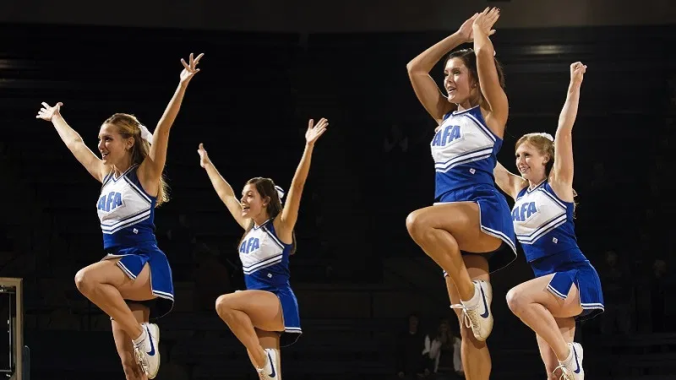 Well, this in encouraging. Another court has slapped down a school’s attempt to punish a student for what she wrote online in a personal social media  account. Ethics Alarms has protested the abuse of authority this increasingly common practice represents for many years—I don’t have the time right now to track all the posts down, but I will, and add a link to them here.

U.S. District Judge A. Richard Caputo ruled that the Mahanoy Area School District (In Pennsylvania) violated a student’s First Amendment rights when it kicked her off the junior varsity squad for writing “fuck” repeatedly in a Snapchat post. Do you use that mouth to cheer with, honey?

The teen made the vulgar post on a weekend in May, 2017, off school grounds. It pictured her and a friend holding up their middle fingers with the cogent text, “fuck school fuck softball fuck cheer fuck everything.” She was dressed in street clothes, not her cheerleading uniform, with no pom-pons.  I don’t know how schools got the idea that they could control every aspect of a student’s life and speech to this extent, but too many try. And too many get away with it.

She was angry after only making the junior varsity squad at the end of her freshman year, when she had hoped to win a spot on the varsity squad. After she expressed, in her post, the empty nihilism of modern life, subtly evoking the nihilism  of Sartre, Salinger, Ginsberg,  Ferlinghetti, and Zappa, the cheerleading coaches suspended the teen from the squad for a year. Squad rules condemned disrespectful behavior and online posts of “negative information” about cheerleading.

In his March 21 decision, Caputo said that the team had violated First Amendment rights as laid out in the 1969 Supreme Court case Tinker v. Des Moines Independent Community School District, which  involved students suspended for wearing black armbands to protest the Vietnam War. The lesson of that landmark case, Caputo said, is that student speech can be regulated only if it would substantially disrupt school operations or interfere with the rights of others.

The school district had argued that the teen and her mother had voluntarily waived the teen’s First Amendment rights by agreeing to the cheerleading rules before the tryouts. Ah, yes, the old waiver trap! The lawyers out there in Ethics Alarms land can guess what’s the matter with this theory: The district had not supplied enough information for the waiver to be informed and valid, and anyway,  the judge correctly noted, “conditioning extracurricular participation on a waiver of a constitutional right is coercive.”

Incredibly, the district tried this Hail Mary in its brief: it  argued that there is no constitutional right to participate in an extracurricular activity such as cheerleading, so there was no constitutional violation when the teen was removed from the squad. I know the lawyers came up with this one, and lawyers will try anything in a weak case, but I wouldn’t be comfortable having my kid be taught civics, history and logic by a school that thought that argument made sense.

No, Judge Caputo said.  The district was infringing the right to freedom of speech, not the right to participate in a sport.

Caputo ordered the school district to pay nominal damages of $1 and to expunge any record of disciplinary action from the cheerleader’s record. I am happy to say that The American Civil Liberties Union of Pennsylvania represented the cheerleader, so it still does occasionally do the job it iss supposed to do, rather than engaging in partisan politics.

15 thoughts on “Cheerleader Ethics: Nice Cheerleaders Don’t Say “Fuck,” But They Have A Right To Say It When They Aren’t Cheerleading”