I’ve been thinking a lot about my Dad for some reason, and that was his favorite hymn. It’s an Easter hymn, but our church always had the choir sing it on the special spring service. My unusually musically talented friends knocked it out of the park at my father’s funeral service at Arlington National Cemetery. It also has the advantage of being composed by Arthur Sullivan, just like “Onward Christian Soldiers!” and “Tit Willow.”

1. Fill out your brackets, and enable corruption. It’s the NCAA tournament again, and again, helping the schools and the NCAA and the networks make money off of the destructive and corrupt culture of big time college basketball is ethically indefensible. The New York Times wouldn’t go so far as to say that, but it did recently write about the dissonance, beginning,

Every March, millions of Americans fill out brackets (more than 40 million people, by one count), cheer the underdogs and tune in on television. Others buy tickets to the games, wear jerseys of their favorite teams and let wins and losses dictate their mood. Yet fans who follow college basketball closely know about the game’s intractable relationship to corruption. Even many who come just for March Madness must know that the real madness is not always on the court.

A wide-ranging and fear-inducing F.B.I. investigation into college basketball recruiting continues to ensnare big-name colleges and little-known crooks. It is why Louisiana State, for example, is playing without its head coach, Will Wade, and why Auburn recently had an assistant coach suspended and a former assistant plead guilty of conspiracy for accepting bribes.

This week, the lawyer Michael Avenatti was charged with trying to extort up to $25 million from Nike in exchange for concealing information he had about illicit payments to recruits. He has since revealedsome allegations on Twitter….

The Times doesn’t bother to go into the related problem of how basketball distorts academic goals, sucks away resources that should be used for education, and usually leaves its athletes no better educated than they were when they arrived. As you might expect, the Times’ writer is too ethically incompetent to provide and enlightenment. For example, he quotes one ethicist as saying, “…Someone thinks, ‘Gosh, this is unethical, but I love it so much, and my friends and I have such a good time rooting and cheering that I’m going to participate anyway.’” That description could also be used to justify gang rape. Can we have a little nuanced clarification? Then the Times writer, John Branch, offers these ill-devised analogies:

“Such internal debates permeate our culture. Is it O.K. to dance to a Michael Jackson song, to laugh to a Louis C.K. joke, to watch a movie produced by Harvey Weinstein? To cheer for football knowing what it may be doing to players’ brains?”

A Michael Jackson song isn’t corrupt, or unethical: it’s art. He’s dead: dancing to the song does not enable the misconduct. A joke is a joke regardless of who tells it, and again, laughing at a C.K. joke doesn’t make it more or less likely that he’s going to masturbate in front of a female colleague. Workplace misconduct doesn’t taint the work product, and nobody has claimed that movies themselves are culturally corrupting, or that Weinstein’s films harmed the actors in them.  Cheering for football is a legitimate comparison, because the sport itself is the problem, just like college basketball itself is the problem.

2. Is it funny to keep calling Trump a “bad President” when you really haven’t given any thought to whether he is or not? Stephen Colbert, the CBS all-Trump-hate-all-the-tme late night comic, conceded (bit not really) that President Trump hadn’t colluded with Russia as he’s been saying for three years, but unveiled this list to prove that he was a “bad President” anyway: 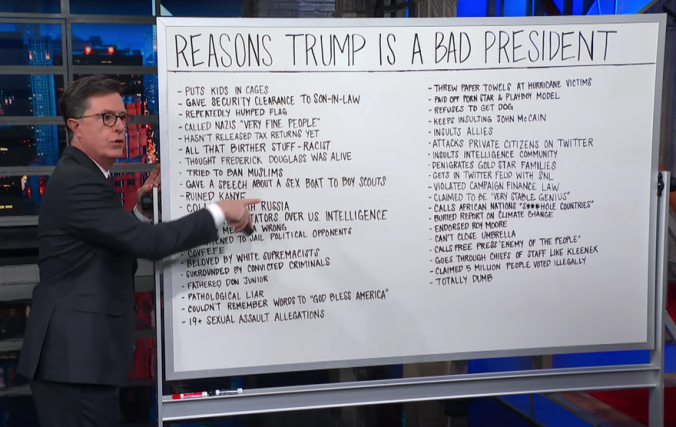 Now, I know that many of these are intended as gags, but if you were Colbert, and going to accuse the man of being a bad President, wouldn’t you want to have some legitimate substance in there, since this has literally been his only theme for three years? The list is self refuting, just like Newsweek’s racism cover. (Here, and here.) It is padded with conduct that didn’t occur while Trump was President; dubious assumptions yet to be shown, outright distortions from “resistance” talking points (The President never “tried to ban Muslims;” he never “put kids in cages,’ he never called Nazis “very fine people,” etc, etc. ); contrived arguments that he responsible for who supports him; and complaints about his tweets and comments. Virtually none of these have any relationship to how we judge whether a President is good or not.

3. Ethics Hero: Chris Rock. At last night’s 50th NAACP Image Awards Ceremony in Hollywood, where, inexplicably, the organization could have placed itself in the position of honoring Jussie Smollett after a corrupt deal with Chicago prosecutors let him escape the consequences of a vicious hate-crime hoax, Chris Rock apparently defied instruction that he lay off the nominated “Empire” star, and laid into him instead, saying,

They said ‘No Jussie Smollett jokes’ … What a waste of light skin. Do you know what I could do with that light skin? That curly hair? My career would be out of here! I’d be fuckin’’ runnin’ Hollywood.

What the hell was he thinking? You’re ‘Jessie’ from now on. You don’t get the ‘u’ no more. That ‘u’ was respect. You ain’t getting no respect from me!

The mostly black audience appeared to share Rock’s sentiments. Smollett skipped the event, and the “Best Supporting Actor in a television drama” award he had been nominated for went to a more respectable performer. Normally I would argue that Smollett’s acting should not be judged with reference to his off-set activities, but had the NAACP given him the honor, it would have been perceived as an endorsement of  his hoax as well as his art.

4. The President says “bullshit.” Frankly, I’m surprised it took him this long. Several of his declared potential opponents, as well as DNC chair Tim Perez have begun salting their anti-Trump rants with “fuck” and worse. Sam Donaldson was apparently deeply offended (whose idea was it to bring this idiot back into the commentary wars?); Ann Althouse, who uses the term when she feels it is appropriate, is offended that Donaldson is offended, writing,

The bullshit horse has left the incivility barn, unfortunately, and long ago. When people routinely use initials and code words while making it crystal clear that the word they mean is “bullshit,” then the term has received the approval of the larger culture. When I was growing up, it was taboo to say “damn,” “hell,” “shit,” “ass” “bastard,” “bitch” and “suck.” Such words were never heard on TV either.  The coarsening of the culture is regrettable, and the President shares accountability, but “bullshit” has entered the realm of vivid speech that expresses an idea better than the more genteel alternatives. (Asshole is another example.)