Why can I almost never can find a lot of encouraging ethics stories on a Sunday?

1. Climate change thought. I just watched a PBS round table consisting of non-stop doom-sayng and Trump-bashing on climate change policy. I don’t know if these scientists/pundits/activists are using climate change as a ploy to eliminate democracy and install a Leftist totalitarian (benign, of course) world government, or if they really believe that such a system is the only way to save the Earth. Either way, however, it is impossible to listen to them objectively and not think, “Huh. The only way the draconian [that’s a word named after a despot, you know] solutions that you claim are our sole chance at survival can be implemented is with a massive dictatorship. And after the solution has “worked,” if it works, that totalitarian government will of course dissolve itself and go back to supporting liberty and democracy.  Sure it will. How stupid do you think we are?”

If the only way to save the Earth is to forfeit liberty, I, for one, stand with Patrick Henry. The climate change radicals are good matches to the anti-war and anti-nuke activists in the late Fifties and early Sixties who chanted, “Better Red than dead!”, and who thought “Eve of Destruction” was profound prophesy.

2.  Cuba, Obama, Trump and Baseball. I don’t know what to make of this one.: it’s a fascinating utilitarian question.

President Trump cancelled an agreement negotiated by the Obama administration that allowed Major League Baseball teams to pay the Cuban Baseball Federation for Cuban players who would then join MLB teams. Under the previous system, only players who defected to the United States, often at great peril and sometimes using human traffickers, could ply their baseball talents in the U.S. and be paid accordingly.

The Trump administration saysthat the deal constitutes a violation of trade laws because the Cuban federation is part of the Cuban government. In other words, the Obama deal allowed the Cuban government to sell human beings to U.S. companies—baseball teams. “The U.S. does not support actions that would institutionalize a system by which a Cuban government entity garnishes the wages of hard-working athletes who simply seek to live and compete in a free society,” said Garrett Marquis, a spokesman for the National Security Council. “The administration looks forward to working with M.L.B. to identify ways for Cuban players to have the individual freedom to benefit from their talents, and not as property of the Cuban state.”

The cancelled deal was always suspect as one of several concessions President Obama gave to Cuba without Cuba instituting any human rights reforms in exchange.  And why were baseball players the only Cuban citizens allowed to escape to freedom this way? Why not doctors, scholars, and scientists?

3. From the “Bias makes you UNBELIEVABLY stupid” files. How many of you could tell immediately that Michael Avanetti was a) a sleazebag b) a few squares short of a checker board and c) guaranteed to self-destruct?  I sure could. Yet everyone from “resistance” shills to TV comics to news hosts were convinced that he was the real deal, simply because his announced purpose in life was to bring down the President. Here is a compilation [ Pointer: Washington Free Beacon] of the degree to which the Democrats, progressives and others made total fools of themselves endorsing–smugly, joyfully!— such an obvious con artist:

4.  Clearly, it doesn’t do any good when I try to defend Rep. Omar. How did a somewhat unfairly criticized “gotcha!” remark become a full-fledged ethics train wreck? It’s because common sense, prudence and sanity have apparently fled the field for the hard-left Democratic freshman class and its knee jerk defenders. To recap: last month Omar addressed a banquet of the Council on American-Islamic Relations (the notorious CAIR) and said,

“CAIR was founded after 9/11 because they recognized that some people did something and that all of us were starting to lose access to our civil liberties.”

Was this choice of words an attempt to trivialize the terror attacks? Was “some people” an effort to imply that Omar’s least favorite people—you know, Jews—were  behind the attacks, or that radical Islamists were not? Ethics Alarms held that this was exactly the kind of rhetorical “gotcha!” that the Left and the media use against President Trump almost daily, and that, absent more evidence, she deserved, as we all do, the benefit of the doubt.  Then Omar and her pals proceeded to keep shoving metaphorical feet into their metaphorical mouths. 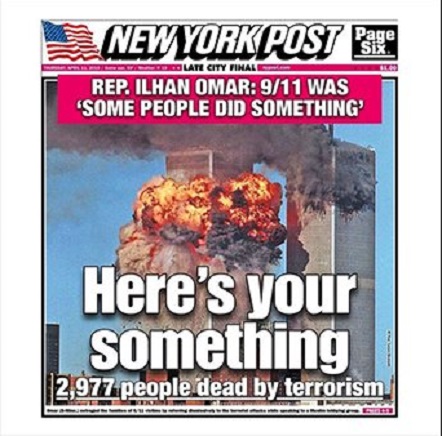 Sure enough, Rep. Ocasio-Cortez called for a boycott of the “racist” Post, thus proving her fascist bona fides, trying to use coercion to stifle free speech. She also proved that she doesn’t know what “racist” means, except for the current Democratic Party definition, established during the Obama administration, that any criticism of a non-WASP is racist.

“The people — and the people who knocked these buildings down will hear all of us soon!” President George W. Bush Was Bush downplaying the terrorist attack? What if he was a Muslim

5. Reminder: It is unethical to ignore reality for ideology. Also incredibly self-destructive and stupid…This bill won’t ever become law, but it is still signature significance for a progressive movement that is incompetent, and I’m speaking of the mental health definition. House Democrats are pandering to transgender individuals with their “Equality Act”:

The…”Democrats’ Equality Act would amend the Civil Rights Act of 1964 to make ‘sexual orientation and gender identity’ protected characteristics under federal anti-discrimination law,” and would force schools to accommodate “transgender” male athletes who identify as female by placing them on female-only sports teams.

Biological males competing as females have become a trend in high school sports (as well as some professional sports), and several biologically male athletes have earned top honors in state sporting competitions, beating out the women for whom the all-female contests were created.

Activists supporting transgender rights in sports disingenuously contend that there are no innate physical differences between women and men—well why not have both sexes compete together in all sports, then?—and argue men who identify as female should be allowed to compete against competitors who were born, raised and grew up as female. The Human Rights Coalition even wrote a statement in support of the bill:

“Opponents of equality in athletics for transgender athletes have argued that girls who are transgender have unfair physiological advantages over cisgender girls and as a result, will dominate women’s competitive sports…[this is not] “rooted in fact.”

Except, of course, that it is.

Only one Democrat voted against the bill.