“Am I holding it right?”

In the comments to yesterday’s post discussing the jaw-dropping ignorance and anti-gun bias displayed by a popular advice columnist, the question again arose as to why anti-gun advocates remain so uninformed about their own passion, and don’t bother to educate themselves sufficiently that they won’t sound like idiots—like, for example, “Ask Amy,” who confused hollow-point bullets with armor-piercing bullets, said the hollow-points were “exploding bullets,” referred to a common and popular handgun as the kind of weapon criminals use, and suggested that owning a gun was a dangerous sign of hidden criminal activity.

Glenn Logan, in the first of the two  Comments of the Day that were sparked by “Dear Ethics Alarms: I Am An Advice Columnist Who Is Ignorant And Phobic About Guns. When I Get A Question About Guns, What Should I Do?”, theorized thusly…

I think perhaps because they believe it unnecessary and irrelevant. Guns are bad regardless of the use or competence of the person owning them, and that badness is imputed, in large degree, to their owner. It’s a kind of guilt by association — if you own a gun, there is something fundamentally wrong with you based on that fact alone. Guns = Bad, and how they or their ammunition works is just a meaningless detail that couldn’t possibly interest an enlightened person.

You can tell by the way firearms opponents argue their points that they neither know nor care about the function of firearms. They don’t think all that stuff matters, and in their minds, no amount of facts can overcome the one simple judgment that firearm ownership is undesirable in advanced societies.

It is possible that the gun-haters actually fear knowledge about firearms — they fear they may be seduced by their apparently powerful evil, and thereby tempted to become what they not just despise, but actively want to despise.

Amy’s research was so transparently superficial, and her fundamental understanding of the physics of firearms and ammunition so inadequate that it is impossible for her to opine with any authority on the subject whatsoever, even if she just confined herself to the social aspect. It would be like a person who speaks only Swahili and knows only pidgin English trying to critique the original manuscript of Oliver Twist — it’s doomed from the outset not just to failure, but to an unethical level of ignorant disinformation.

Hollow points as “exploding bullets” is a construction that is going to give Second Amendment supporters giggles for … maybe generations. Even Eric Swalwell’s risible comment about nuclear weapons pales in comparison for sheer ignorance, ineptitude, and comedic value.

One would normally have to listen to Alexandria Ocasio-Cortez to hear such cringe-worthy ignorance.

The reference to AOC was especially welcome after her now-immortal comparison of the illegal immigration detention centers—that are identical to those employed by previous administrations–as “concentration camps.” But I digress! Next, Humble Talent notched an enlightening  Comment of the Day on the topic of wilful ignorance:

In the wake of the Las Vegas shooting, recently defeated presidential candidate Hillary Clinton tweeted out: 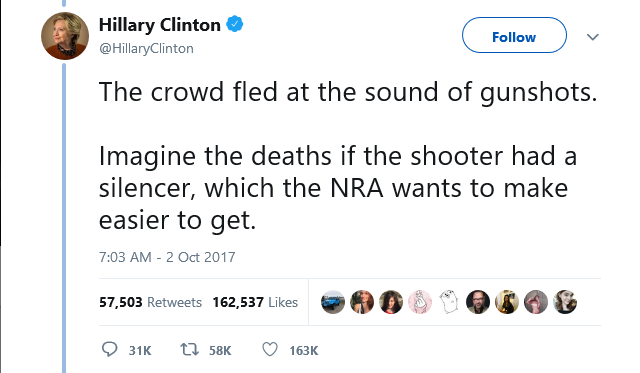 I  can’t imagine what more ignorance looks like crammed into a smaller package. Let’s dig into this.

First… There is no such thing as a silencer. This might seem semantic, and there are plenty of gun rights advocates who use semantics…. It’s not important, for instance, that the AR in AR-15 stands for “Armalite Rifle” instead of “Assault Rifle”. But it’s not semantic because…

Second… A suppressor does not silence anything, and anyone who thinks otherwise is getting their information from television. I suppose if you see it on TV, it must be true, no? The misconception is that the suppressor reduces the sound of a shot into a little air fart that sounds kind of like a spitball. In reality, a suppressor dampens muzzle flash and reduces the decibel level from that of a shot down to that of a jackhammer, converts that energy to heat, and distributes that heat down the barrel. One might reasonably ask at this point “Well, if a suppressor doesn’t silence the shot, what’s the point? Well. I’m glad you asked, my virtual Watson! Suppressors are designed to augment or replace hearing and eye protection. They are safety devices. Which might be why the bill the Republicans were trying to pass with the support of the NRA was called the “Hearing Protection Act”. Because at that point, it was harder to get the safety device to attach to the end of the gun than it was to get the gun itself, probably because Democrats had watched too many Bourne movies and were afraid of super assassins shooting up everyone. Moving on to…

Third… Remember what I said about the function of suppressors? That they convert light and sound energy into heat and disburse that heat into the weapon? Well, they do that, and they do that fairly well. So well in fact that the heat can become a problem. In small caliber handguns, it’s fairly insignificant…. but in a bump-stocked AR-15? Now I’m not going to say the weapon would melt in their hands, or that you could tie the barrel into a bow, but you would probably damage and warp your weapon, and almost certainly cause a misfire.

If it hasn’t struck you yet…. Had the shooter been stupid enough to attach suppressors to his weapons, everyone would have still heard those shots, there’s a chance they might have failed, and fewer people would have died.

So to tie that into a neat little package: The woman who might have been President of the United States of America tweeted authoritatively from ignorance, having no idea what the device was called, what it did, or what the effects of attaching it would be, but she’s watched enough television to be afraid of them, so she capitalized on the post-Vegas heartstrings of America to push a “common sense” narrative that would maintain restrictions on safety devices.

My normal line is “How are you supposed to know what common sense gun control looks like when you barely know the shootey end of the gun from the grippey end, and why on earth should we listen to you?” I think that can be re-purposed for preachy ignoramuses sowing unnecessary fear of weapons they have absolutely no conception under God regarding their function.

10 thoughts on “Comments Of The Day: “Dear Ethics Alarms: I Am An Advice Columnist Who Is Ignorant And Phobic About Guns….””