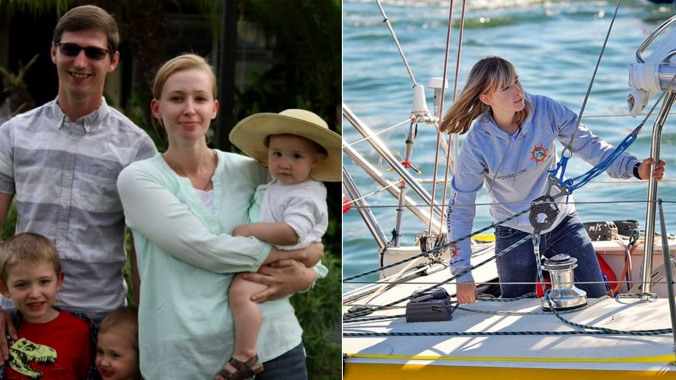 Abby Sunderland, now and then.

Not awake, don’t expect to be awake…

1. Where have I been? Yesterday’s 16 hour marathon for the D.C. bar, followed by another three hours bright and early this morning, pretty much have me operating with one-half of my brain tied behind my back while functioning like a lesser Kardashian with a closed head injury. That I got through it all relatively intact is all due to the Ethical Arts Players, my team of brilliant actors who frequently enhance ProEthics programs—in this case, Esther Covington, David Elias and Chris Davenport, who played 10 comic characters in the ethics training video we were shooting, and Paul Morella, who has been portraying Clarence Darrow with me for almost two decades. It was long day and an exhausting day, but thanks to them, a very proud day for ProEthics.

2. Terrific open forum, everyone, and once again, thanks.

3. On child exploitation...Since you asked about my view of children setting “youngest” records doing dangerous things: the opening thread on the forum was sparked Keith Walkers comment,

Yesterday on the Today Show there was a feature on a 10-year-old who just became the youngest person to ever successfully climb El Capitan. I immediately thought of Jack and this blog, wondering what he would think of the parents’ decision to let this happen, since someone who is 10 is clearly too young to understand the potentially deadly ramifications of failure. Several friends agreed with my leanings toward “what on Earth were the parents thinking??”, but some made some good points the other way as well. (The parents were well-trained climbers, were with her the entire climb, clearly professionals, etc. – the girl was surrounded with experience, if that makes a difference in your opinion.)

As several commenters knew or guessed, my position on this kind of thing is fixed, and I have expressed it many times. Like…

Ethics Alarms’ position was that the boys were being exploited by their parents at the cost of the children’s comfort, safety, health, and socialization: “John and Nancy Vogel are the latest example of high-profile parents compromising the safety, welfare, comfort and emotional development of their children for selfish motives.”

“Little Lyra developed a fever and a rash was circumnavigating her body, and her parents had run out of ideas for treating it. The Kaufmans issued a satellite call for help to the U.S. Coast Guard after their  sailboat, Rebel Heart. lost its steering and radio about 900 miles southwest of Cabo San Lucas, Mexico. Would the fever have been sufficient to alarm the Kaufmans if the sailboat was still functioning? Who knows, with these geniuses. Their thought processes are a mystery. So four California Air National Guard members had to parachute into the ocean to rescue the family and its sick child.”

Whether children fully understand it or not, they trust their parents to guide them away from harm, not into it. That is, unless they have parents who see their children as a vicarious or direct way to realize their own ambitions. We are told that Daddy Suleman “had long dreamed of flying around the world” and that “he and his son decided to make the adventure a fundraiser for the Citizens Foundation, which has built 1,000 schools in Pakistan.” Right. His son decided that. All by himself. Sure. The father decided to realize his dream by endangering his son, and that’s a the sad and unpleasant truth.

A 13 year old has neither the judgment or the strength of an adult, and he does not have the maturity to be responsible for his own decisions. This all started because Jordan wanted to climb all the major peaks in the world by his 16th birthday.  Cute: and this is when a responsible parent says, “No.” If he tries Everest when he’s 21 and dies, as people who try to climb the world’s highest mountain do with some regularity, at least he made an informed decision and at least he lived 21 years. …The parent protests that it [is] the child’s choice, and the child [is] “experienced.” Well, no child is experienced enough to agree to subject himself or herself to peril, physical, or emotional.

That a tragedy may have been averted, however, doesn’t mitigate that unethical abdication of responsible parenting and trust by Abby’s parents that set the stage for a calamity. Had the ill-conceived adventure ended fatally, it is certain that we would have heard her heart-broken parents eulogize their daughter as intrepid, courageous and mature beyond her appearance, who lived a full life in her sixteen years, and perished “living her dream.” All true, but those aren’t the facts that matter. What matters is that she is a dependent, trusting, sixteen-year old child who desperately needed her older and supposedly wiser parents to say “No. Being the youngest woman to sail around the world is good, living long enough to go to college, have a family, have a career and experience the joys of life over many decades is better. Sorry. It’s too dangerous. When you understand a little bit more about life, you may be capable of deciding when to risk it.”

Abby is perhaps the best poster child for all of these fiascos. She tried to circumnavigate the globe a second time in 2011, but her boat lost its mast, and she had to be rescued again. This rescue cost $300,000, and Abby and her family were criticized by French papers by not contributing to pay for it. Her father  continued to exploit his daughter’s yachting failures, at one time seeking a reality show for her and making a documentary. Abby wrote (that is, her ghost-writer did) a book, and went on book-signing tours. She claimed then that she would be getting a pilot’s license so she could fly around the world solo.

Now 25 and her 15 minutes of fame long gone, she lives in Alabama, and is married with three children.

I confess, I hate all of these stories of child exploitation and abuse, which are almost always cheered by a shameless and irresponsible media that give the unethical parents exactly what they want: publicity, morning TV interviews, and their pathetic measure of fame and false importance.