Oh, great: started this post at 7 am, hell broke lose at ProEthics, and now it’s after noon. Well, the hell with it: I’m not going back to change the headline or the intro, and I like Lenny’s version of the Stars and Stripes at any time of day.

1. Unprofessional and dangerous stuff from  Above the Law….as usual. The legal gossip and snark online tabloid is run and written by lawyers who are not practicing law, so they feel free to engage in conduct that lawyers are forbidden from engaging in, like misrepresentation.  Lately the cyber rag has been cyber-ragging on Jones Day, a long-time, distinguished D.C. mega firm. Why are they doing that? Come on, it should be obvious.

ATL takes the position—and it has company— that Jones Day is eeeevil and must be shunned because it represents the Trump campaign. Hence you get headlines like “IF YOU HAD TO GUESS WHICH FIRM WOULD DO THIS:New allegations claim Jones Day lightened the skin and narrowed the nose on the picture of one of their lawyers.”

See, ATL thinks you’d guess that because Jones Day must be a racist law firm to represent that racist President’s campaign (See Big Lie #4). The effort to try to punish any organization, institution or individual who assists the President in any way has been one of the most unethical and undemocratic tactics of “the resistance”—it’s so hard to pick THE most—but this version, impugning lawyers based on whom or what they represent, is especially egregious coming from lawyers, even disgraceful, bigoted ones like Ellie Mystal, the author of the article in question.

We keep encountering this dangerous attack on the bedrock principle of law, that lawyers do not endorse individuals or organizations, or even causes, by representing them. Lawyers supply access to crucial rights under our legal system, and how a client chooses to exercise those rights is irrelevant to the lawyer’s duty, as long as the client’s purpose is arguably legal. Thus we have this among the profession’s ethics rules:

1.2 (b) A lawyer’s representation of a client, including representation by appointment, does not constitute an endorsement of the client’s political, economic, social or moral views or activities.

Members of the public who do not comprehend that principle, and most don’t, do so at their own risk, and help spawn fiascos like Harvard punishing a law professor for providing the criminal defense for Harvey Weinstein that the 6th Amendment requires, in order to ensure his Due Process rights not to be found guilty without a trial, something that the progressives increasingly seem to find inconvenient. It is the duty of lawyers to explain to non-lawyers why 1.2 (b) protects all of us, and not to smear lawyers for doing what lawyers are supposed to do….represent people no matter how unpopular they may be.

2. Oh! I almost forgot! Here is one of the Jones Day outrages that Ellie is pushing:

And now for the most shocking allegation in the complaint, at least in my humble opinion: the complaint alleges that when Sheketoff had her picture taken for the firm’s website, the final image was edited to lighten her skin and narrow her nose. As the complaint notes, “[t]he apparent purpose of the alterations was to make was to make Julia appear more Caucasian and (in the opinion of the editor) more attractive.” The complaint says they edit the pictures of women at the firm on the reg … to make them prettier, while men are spared the photoshop treatment. In a perfect illustration on the way intersectionality works, in the case of this bi-racial woman, “prettier” = more white.

Oh, for the luvva..here the untouched photo of the lawyer in question with the edited version on the firm website: 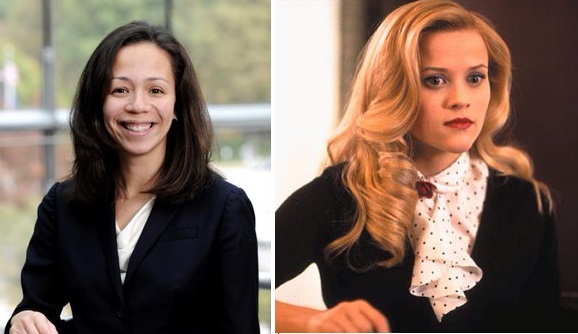 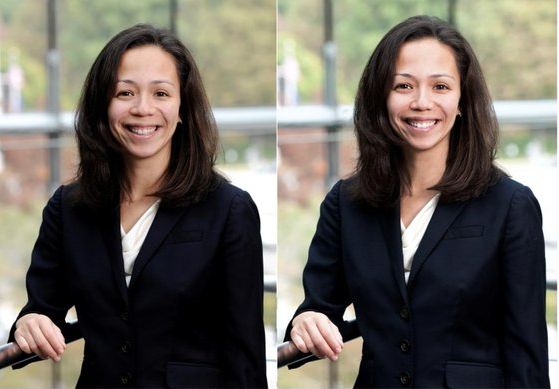 Wow. How racist can you get!

The presumption that this minimal photoshopping is based in racism and sexism is confirmation bias squared. If someone wants to argue that lawyers should give consent before their photos are altered, fine. If the argument is that the Jones Day edits are incompetent, I’ll endorse that: the version on the right looks like a lighting error, but to my eye it neither makes the lawyer look more attractive nor more white. As a lawyer for the aggrieved ex-firm member, though, I would have advised the woman that this contrived complaint puts the rest of her claims in jeopardy, by raising doubts about her credibility.

3. Nah, Politifact isn’t a partisan hack fact-check service! Politifact, in a jaw-droppingly dishonest “fact-check” of Kamala Harris’s and Elizabeth Warren’s deliberately continuing the disproved narrative that Officer Wilson murdered Mike Brown and did so out of racial malice, refused to declare the statements lies.

As with so many Snopes posts of recent years, this is a smoking gun: Politifact is signalling to anyone with a basic knowledge of history and law that it can not be trusted….not that this wasn’t obvious anyway.

Maybe if you just read these excerpts, your head won’t explode like mine did from reading the whole unforgivable post:

“There is no question that Wilson killed Brown, and there’s strong evidence that it was not accidental.”

Nobody, including Wilson, ever claimed the shooting was accidental. It was self-defense, but Wilson intended to shoot the huge man charging him, and shot until he was down, as the officer was trained to do. Politifact is deceptively changing the legal issue.

“In discussing the case with legal experts, however, we found broad consensus that “murder” was the wrong word to use — a legal point likely familiar to Harris, a longtime prosecutor, and Warren, a law professor.”

“Because the significance of Harris’ and Warrens’ use of the word is open to some dispute, we won’t be rating their tweets on the Truth-O-Meter.”

By “some dispute,” this den of hackery means that they beat the bushes to find activist academics who made specious claims like Joy Leopold, an assistant professor of media communications at Webster University in Missouri. Politifact quotes her as saying,  “Focusing on the language opens up the opportunity for some to discredit the conversation about police brutality and the criminal justice system in general.”