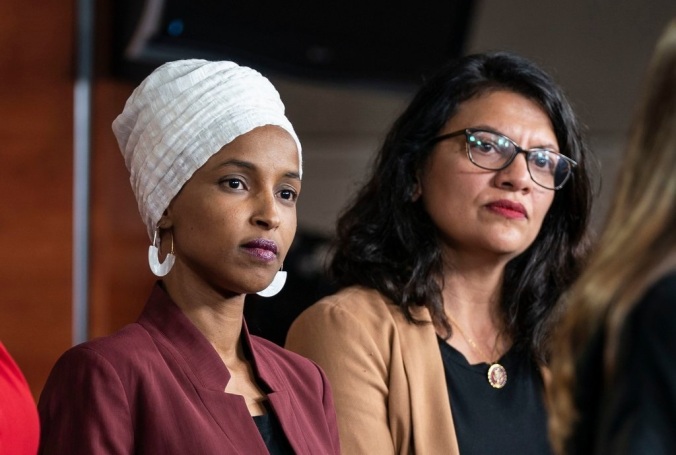 An Israeli official close to the prime minister’s office said on Thursday that a call came from the Trump administration as recently as this week pressing Mr. Netanyahu to bar the congresswomen. The official, who spoke on the condition of anonymity to discuss delicate information, said the prime minister found himself in a “lose lose” situation, having to choose between upsetting Mr. Trump or the Democrats.

Of interest but irrelevant to the ethics issue is this morning’s news that Tlaib is now being allowed to enter Israel on humanitarian grounds in order to visit her 90-year-old grandmother, provided the Congresswoman pledges  “not to  promote boycotts” while in the country. That’s nice. But it doesn’t change the analysis of what Trump did.

One of the “Big Lie” attacks (I haven’t yet added this one to the Ethics Alarms Big Lie Directory, but it will be #6) on President Trump, spurred by partisan academics and gullibly swallowed whole by history-challenged members of the public, has been that this President uniquely ignores or violates so-called “democratic norms,” meaning that he frequently takes actions that may be within his power, but that traditions, precedent and the practices of his predecessors have established as un-Presidential or even taboo. For the most part, this is contrived criticism representing a double standard and requiring historical amnesia. Presidents break norms, and the stronger ones break them frequently. Democrats attempting to equate  breaking precedents as the equivalent of “high crimes and misdemeanors” are showing their hand: this complaint is just one more unethical justification for a “resistance” coup.

The fact that there is nothing automatically wrong with breaking norms does not mean that all norms should be breached, or that breaching a particular norm is wise, responsible, or ethical. A President enlisting a foreign ally to take negative action against a member of Congress is one norm that shouldn’t be violated.

The action is unethical by any ethical standards. From a Golden Rule standpoint, no President would tolerate members of Congress lobbying foreign governments to take adverse action against him, though I have little doubt that this has been attempted by legislators in the past. Kant’s Rule of Universality would reject the practice as a new norm, and from a utilitarian standpoint, it’s hard to see how such conduct by a President would result on balance in more beneficial consequences than negative ones.

Indeed, it’s already pretty clear that the move was foolish for the President, and that acceding to it was unwise on Netanyahu’s part. Domestically, it looks like mere pettiness against “The Squad”and two of its members who have attacked him with vulgar insults like “motherfucker” and called for his impeachment. (President Trump is nothing if not petty.) Since the two women are “of color,” this also gives the media and the race-baiters a metaphorical stick to beat him with, implying that his move was motivated by racism. That’s nonsense, as it should be obvious by now that President Trump’s pettiness and vindictive instincts are color-blind, but as sure as the Lord made little green apples, the New York Times wrote this morning,

“…he demonstrated the lengths that he will go to to target his domestic opponents, in this case two of the congresswomen of color he has sought to make the face of the Democratic Party heading into his re-election campaign.”

Trump’s intervention into Israel’s decision has other negative consequences too. I’m sure it will be cited as another justification for impeachment by Jerry Nadler and Adam Schiff. It is one more example of the President punching down, and punching down at two women, which is likely to attract sympathy for these generally unsympathetic foes. The move also gave ammunition to Netanyahu’s opponents, who now are accusing the Prime Minister, who faces an election soon, of being Trump’s lapdog.

In short, breaching this norm was unnecessary, reckless, stupid, incompetent and irresponsible. Unethical.

There are some mitigating factors to consider, however.

Those Presidents were just smart enough or devious enough to cover their tracks.

In fact, there is such a law, and has been since 2017. It is aimed at outspoken supporters of the Boycott, Divestment and Sanctions movement , which encourages individuals and institutions tto pressure Israel to end the occupation of much of the West Bank, grant full equality to Palestinian citizens of Israel and allow Palestinians and their descendants to return to the homes from which they were displaced after the establishment of Israel in 1948. Both Tlaib and Omar are such outspoken anti-Israel advocates.

So why did the President have to encourage Israel to enforce its own law?

UPDATE: Now Rep. Tlaib has announced that she won’t visit her grandmother, writing,

“The Israeli government used my love and desire to see my grandmother to silence me and made my ability to do so contingent upon my signing a letter – reflecting just how undemocratic and afraid they are of the truth my trip would reveal about what is happening in the State of Israel and to Palestinians living under occupation with United States support.”