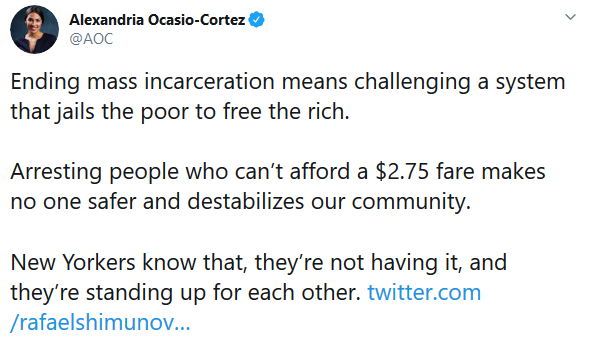 Call it demagoguery, grandstanding, ignorance, rabble-rousing or whatever you choose, an elected representative of the government tweeting such nonsense to those foolish enough to follow her is irresponsible in the extreme.

Hundreds of protesters hit the streets Friday and Saturday in Brooklyn to protest  police brutality by the NYPD and its crackdown on subway fare evaders. Naturally the demonstrators chanted “No justice, no peace,” the current content free, no thought required  slogan of choice by those who couldn’t articulate what they consider justice if they had a teleprompter.

It’s unethical for government officials to be encouraging anarchy, which is exactly what a society gets when it allows people to decide when they feel like paying for goods and services everyone else is paying for, and if they don’t, they just take them anyway. I remember turnstile jumpers; when I lived in the Boston area, I knew turnstile jumpers. They could afford the subway; they just thought it was cool to steal a ride.  AOC’s logic is somewhere on the slipper slope that holds that anyone who wants to cross into our country illegally should be given welcome gifts and a puff piece in the New York Times. If it’s OK to steal subway rides, why not snacks? Why not steaks? Why not let people walk out of restaurants without paying their bills? Take  the clothes they like off the racks and walk out the door?

What destabilizes the community is irresponsible leaders encouraging citizens to break laws while demonizing the police whose job it is to enforce them.

I don’t even know what “jail the poor to free the rich” means, and I certainly don’t want to venture into the uncharted wilderness of AOC’s mind to find out.