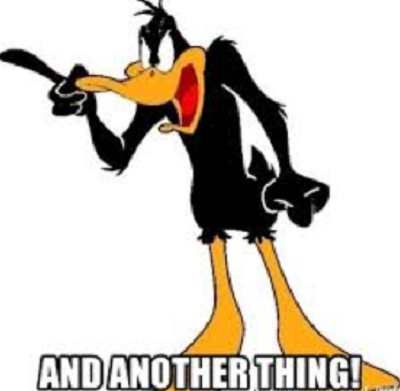 5. The obvious weakness of the current field of Democratic challengers has revived the Presidential hopes of several wannabe who—correctly—judged themselves unqualified and unlikely to be elected President in 2020. The latest to say “Oh,hell,  why not?” is wan Obama-imitator Deval Patrick, the former Massachusetts governor.

In that other party, ridiculous Mark Sanford suspended his Presidential bid, making the much anticipated Sanford-William Weld debates a lost hope.

Has the United States ever had such a dearth of qualified and trustworthy political leaders, or two political parties so inept at meeting their obligations to the republic? I began re-watching the wonderful HBO miniseries “John Adams.” over the weekend, It was inspiring and depressing simultaneously.

6. My Facebook Borg friends are celebrating the fact that SCOTUS is allowing the families of Newtown, Connecticut, shooting victims to sue gun-maker Remington Arms Co., the manufacturer of the AR-15 used in the 2012 massacre.  The decision to reject the case for immediate hearing before the Court came without comment. SCOTUS picks and chooses when to weigh in on certain big issues, like the Second Amendment.

The decision to wait is probably prudent; it certainly isn’t a victory for the anti-gun zealots.

7. The FBI reported that for the for the first time in four years, reported federal hate crimes were fewer than the previous year. How inexplicable, since we have the same President as 2017 and were told repeatedly that he had driven the increase in hate crimes.

Now does he get credit for the reduction?

8. I would be so much happier if activists and politicians would hold themselves and their allies to the consistent standards. Not only is doing the opposite a symptom of a lack of integrity, it also corrupts the public, creates cynicism, and promotes a “the ends justifies the means” mindset.

Here’s recent example: Aaron Belkin, the executive director of the liberal activist group Take Back the Court, sent a letter  to Justices Alito and Kavanaugh demanding that they recuse themselves from the three pending Title VII cases because they met and posed for a picture with Brian S. Brown, the president of the National Organization for Marriage (NOM), a conservative organization that has filed an amicus brief in those cases involving LGBT rights.  Of course, this is just grandstanding. Judges and Justices shouldn’t be disqualified because of who they meet, talk to and take photos with. This is just a pre-emptive attack so that the groups can cry “Bias!” if the Court doesn’t decide the case the way they’d like.

The National Review, however, did a nice job showing just how hypocritical the “demand” was:

Consider the level of inconsistency it requires to maintain that a meeting such as this one, likely fleeting and superficial, demands recusal, while maintaining at the same time that numerous protracted public appearances other justices have made at institutions and/or with individuals that were signatories of briefs before the Court do not require recusal. Consider the following recent examples involving the Court’s most liberal members:

These are just a few examples taken merely from the last seven weeks of justices involving themselves very publicly with events in which brief signers played a central role. Who knows what additional private conversations accompanied these appearances, or how many people attending such events whose organizations had signed amicus briefs posed for pictures with the justices?

Having just employed a glaring double standard, Take Back the Court faces two options if it wishes to retain an ounce of credibility. It can extend its recusal demands to Justices Ginsburg, Sotomayor, and Kagan in the above-referenced cases. Or it can take back its one-sided demand laughably confined to conservative justices.

Then there was this threat at the conclusion of Belkin’s letter:

“If you refuse to recuse yourselves, this incident will further illustrate the urgent need for structural reform of the Supreme Court in order to restore a Court that understands its role is to protect individual rights and our democracy.”

Do what we want or else.

Of course, if fear of reprisals drove justices to recuse, that would also demonstrat a conflict of interest.

9. Late Addition! The Massachusetts Appeals Court just informed me that the motion to reconsider the ejected appeal of the trial court’s rejection of the defamation suit against me by a spurned Ethics Alarms commenter has also been rejected.

Nonetheless, I do not expect this to be the end of the matter.