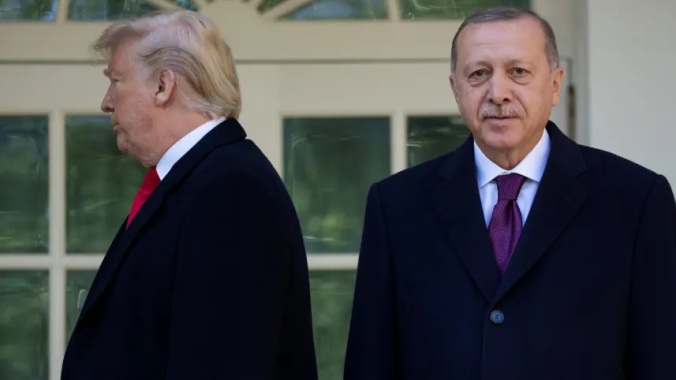 None of this is impeachable, but it’s certainly inexplicable.

President Trump’s conduct and rhetoric regarding Turkey and its autocratic ruler  appear to be incompetent and irresponsible. In November, the President said he was a “great fan” of Turkish President Tayyip Erdogan. Since Erdrogan’s regime has been notable for its restrictions and attacks on basic civil rights, such praise is certain to stir the embers of the “Trump is a secret fascist dictator just waiting for his chance” narrative. Maybe that’s the idea, and this is more intentional trolling; who knows? Does Trump play three dimensional chess? Does he just say stuff without thinking, and then backtrack just as quickly?

Over recent months, the President also sided with Erdogan in rejecting Congress’s bi-partisan resolution officially labeling  the Ottoman Empire’s massacre of an estimated 1.5 million Armenians in 1915 as genocide. Turkey’s official position has been that the deaths were a product of war, and not illegal. Trump called it  “one of the worst mass atrocities of the 20th century” on Armenian Remembrance Day, and after the Senate passed its side of the resolution,  State Department spokeswoman Morgan Ortagus said in a statement,“The position of the Administration has not changed…Our views are reflected in the President’s definitive statement in April.”

It is worth noting, since the anti-Trump media won’t tell you, that the ‘horrible but not genocide’ approach follows decades of US policy designed to avoid angering Turkey, a NATO ally. Former President Barack Obama also did not refer to the killings as “genocide” during his tenure.

I understand that “genocide” is a politically loaded word, but the continuing argument regarding what term to use regarding a more than 100-year-old event, as if the terminology changes anything, mystifies me. Is “mass atrocity” really better than “genocide”? And why can’t the current government of Turkey separate themselves from the Ottoman Empire?

Then, this week,  President Trump signed a defense bill that imposes sanctions on Turkey because Turkey is acquiring Russian S-400 missile systems.

The question is, who are the rats?

Correction notice: I originally wrote “intermittent” for contradictory, which was in error. Thanks to Chris Marschner for the pointer.

11 thoughts on “Trump and Turkey [CORRECTED]”