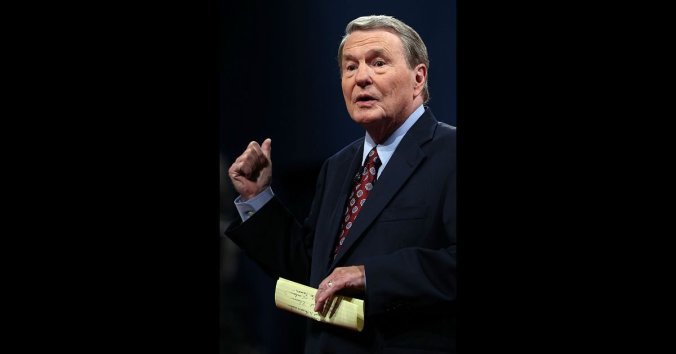 I can’t say I watched the MacNeil-Lehrer Report on PBS (and later after Robin MacNeil’s retirement in 1995,  the PBS NewsHour hosted by Jim Lehrer alone ) more than a handful of times in my life. I wish I had. (I should have: when Lehrer moderated Presidential debates, as he did eleven times, there was never any hint of bias or favoritism, unlike virtually every other debate.)   Lehrer died last week at the age of 85, and his 16 Rules of Journalism, which he often condensed to nine, were published in many news sources upon his passing.

I found myself wondering what various editors and young reporters were thinking as they read Lehrer’s tenets of his now-rotting profession’s integrity. Could they possibly think that the rules accurately reflected widely held and embraced standards of reporters today? Did they read the list with confusion, wondering what in the world this old guy was babbling about? Perhaps they regarded Lehrer’s aspirational list as an archaic and amusing reflection of a bygone era, as many regard George Washington’s 110 Rules of Civility, with its exhortations like Rule #9:

“Spit not into the fire, nor stoop low before it; neither put your hands into the flames to warm them, nor set your feet upon the fire, especially if there be meat before it.”

I wonder. I do know that Lehrer took his rules seriously, though sometimes falling short of his own standards. Below is the version of his rules that he explained in a 1997 report by The Aspen Institute. It’s an excellent, excellent list, reflecting an experienced and ethically astute professional’s keen understanding of what his profession is supposed to do for our society, and the best way to do it.

How many of them do you think motivate journalists today?

1. Do nothing I cannot defend.

3. Do not falsify facts or make up quotes.

4. Cover, write, and present every story with the care I would want if the story were about me.

5. Assume there is at least one other side or version to every story.

6. Assume the viewer is as smart and caring and good a person as I am.

7. Assume the same about all people on whom I report.

8. Assume everyone is innocent until proven guilty.

9. Assume personal lives are a private matter until a legitimate turn in the story mandates otherwise.

10. Carefully separate opinion and analysis from straight news stories and clearly label them as such.

11. Do not use anonymous sources or blind quotes except on rare and monumental occasions. No one should ever be allowed to attack another anonymously.

12. Do not broadcast profanity or the end result of violence unless it is an integral and necessary part of the story and/or crucial to understanding the story.

13. Acknowledge that objectivity may be impossible but fairness never is.

14. Journalists who are reckless with facts and reputations should be disciplined by their employers.

15. My viewers have a right to know what principles guide my work and the process I use in their practice.

16. I am not in the entertainment business.

#16 became the most famous, and I think we can agree that it is deader than George Washington, never mind Jim Lehrer. The seven rules he dropped when he used his truncated list were 2, 3, 8, 12,  13, 14, 15. I wonder why. #13 especially is ethics exemplified, emphasizing the importance of fairness. Why omit #8,  “Assume everyone is innocent until proven guilty”? #15, “My viewers have a right to know what principles guide my work and the process I use in their practice,”  is an affirmation of a foundation of professional ethics: to be trusted, a professional has an obligation to let those who must trust him or her  know what principles guide that professional’s conduct.

I assume that the shorter list was for the convenience of Lehrer’s audiences that he addressed in various speeches, and a concession to practical human proclivities, since nothing makes a groups collective eyes glaze over more reliably than a speaker’s announcement that he is going to recite a list longer than ten items. Lehrer knew that when you are speaking to an audience, you better be an entertainer.

Back to my question: How many of the rules on Lehrer’s list are commonly followed by today’s journalists?

15 thoughts on “Jim Lehrer’s 16 Rules Of Journalism. Awww! How Quaint!”