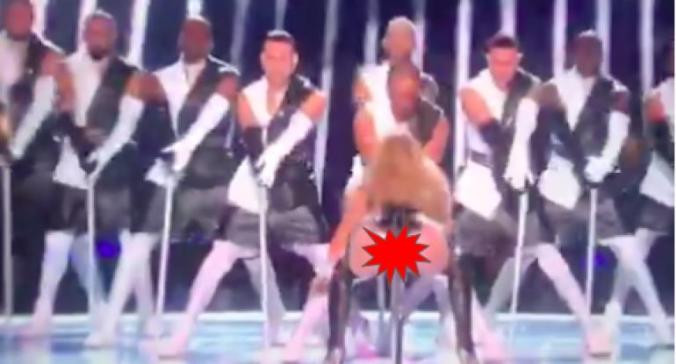 1.”A Nation Of Assholes” indeed. Not for the first time, the NFL and the Super Bowl, aided and abetted by the network whose news arm presents almost all of its female on-air talent as bimbos, is excoriated for it, has a movie made about it, and doesn’t care, presented a half-time show that spectacularly violated FCC rules about what could be broadcast when children are likely to be watching. There were stripper poles, crotch grabs, crotch shots and simulated sex. You know: family entertainment.

Did you know Donald Trump is a crude vulgarian?

Here’s some of Megan Fox’s critique:

…The camerawork was outrageously gross, zooming in on Lopez’s barely covered crotch, so close that the viewer could see some sort of silver maxi pad sticking out from either side of her way-too-small fraud of a garment. If that thing wasn’t riding up between her front-hole lips, then my 6o-inch HDTV television was lying to me, and HD never lies… The only thing separating her anus from the camera is a pair of sheer stockings and a black thong. This is not okay. What the hell is wrong with the NFL? … Also, the cameramen were focused on JLo’s crotch for most of the performance….If you want to see it go find it. But it’s indecent and totally inappropriate for the Super Bowl halftime show. Shakira was not as offensive, although the cameramen also could not stay away from her crotch. But at least she was wearing an imitation of a skirt and she wasn’t on a stripper pole. Yep. JLo did a striptease pole dance while barely-dressed backup dancers simulated an orgy underneath her. It was disgusting.

What is the message here for young women exactly? You are not a sexual object and can demand men be fired for looking at you or complimenting you in the #MeToo era. You can also dress up like a whore and gyrate around on stage half-naked for the pleasure of men, but if they take pleasure in it, you can accuse them of being harassers. Get it?

Got it. This is what you can expect when you entrust family entertainment to a woman who is engaged to Alex Rodriguez. Fox adds, “If you want to file a complaint and make a government agency actually do its job, go here. The sad part is that anyone paying attention to our “contemporary community standards” since 2004 knows they couldn’t be much lower.”

But I, like a lot of sports fans, have struggled in recent years to reconcile what is beautiful about the game with what is ugly. First, there’s the degenerative brain disease linked to repeated head hits — not only to concussions — which the N.F.L. actively worked to conceal. Then there are the league’s troubles with domestic abuse and race…Some fans have learned to tolerate the cognitive dissonance, or to square their free enjoyment with the ostensible free will of the players. Others, like me, have trouble shouldering our complicity with football’s worst elements and have mostly stopped watching. But regardless, fans or not, we mostly show up for the Super Bowl. Why is that?

This is to say that loving the N.F.L. means putting up with a lot. But its outsize popularity also seems a partial answer to the moral riddle that’s so openly vexed us these past two or three years. How do we enjoy the work of bad, unpleasant, corrupt people and institutions? Of criminals? Does opting into the Super Bowl experience then condone the problems of football? Can spectatorship be anything but an endorsement? It’s the conundrum of a capitalist society to the extent that it’s truly a conundrum at all.

Meanwhile, all the #MeTooers in the audience chose to ignore that fact that Tyreek Hill was playing for the eventually victorious Chiefs. That didn’t seem to trouble the Woke, presumably because criticizing a wealthy black athlete with a son whose mother he hasn’t bothered to marry and who terrorizes both of them is being culturally judgmental, but the tomahawk chop favored by the team’s fans was too much to bear.

If you read the piece, and put plastic over the furniture for head explosions you if you do, you will immediately see that the culture critics manage to weasel their way into justifying watching the NFL’s big profit item by exploiting the two worst rationalizations: #1, Everybody Does it, and #22, The Comparative Virtue Excuse, or “There are worse things.”  Here’s Caryn Ganz:

And as for the ethical conundrum, ethics are under siege in every corner of our society: on social media, in Washington, in college admissions, on the music charts. In an era of “LOL nothing matters,” where does football rank on the scale of horrors? Even if your answer is “quite high,” there are 100 million other viewers willing to share the shame.

Why is it that I should care what these people think about the culture, again?

Here is the  complete list of rationalizations that fuel the acceptance and the ultimate embrace of the CTE Bowl:

1. The Golden Rationalization, or “Everybody does it” and these variations:

With 19 rationalizations lined up to let you sleep at night, why not join in the fun?