For some reason there has been a breakdown of civility in the comments lately. This has happened from time to time; something in the air or too many social media rants or something; I don’t really care. You all know where the lines are; you cross them intentionally when you cross them. I appreciate the use of a vulgar word or harsh phrase as much as anyone; “asshole” is particularly tempting, because there is no non-vulgar term that quite captures the essence of its meaning. I also prefer to keep moderation light here, and for the most part, the select commenters who have passed my standards and answered the three questions at the bridge correctly usually make me proud, especially when I see what crawls onto other sites’ comment sections.  The would-be Ethics Alarms participants who send in entries like “Your a Trump-loving fuckface LOL!” are all stacked up in the spam vault, and you would not believe how many of those I have to read to maintain the high level of participants here. I do not care to read that kind of gutter residue on the blog itself.

I just trashed a full comment by a regular commenter here, something I have not done in over ten years, and I’m not happy about it. Let’s keep that lapse the anomaly that it is.

1. From the “When ethics alarms don’t ring” file. Pop Quiz! If you were on the staff of a fashion show about to begin at what the New York Times calls “New York’s famed Fashion Institute of Technology”—which I have never heard of—and several of the models appeared backstage preparing to go out looking like this… 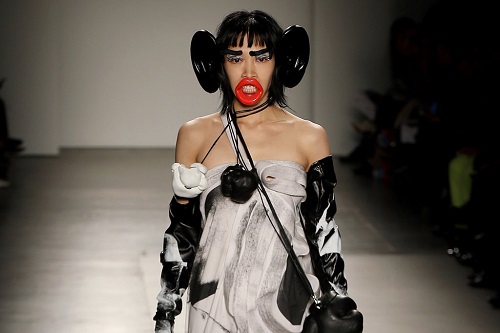 …what would you do?

The answer is that no matter how high or low you were on the metaphorical totem pole, you would be obligated to throw a fit, phone the brass, tell everyone in sight that they are out of their minds, and do everything short of calling in a bomb threat to halt what you know without a shadow of a doubt will result in a public relations disaster.

Incredibly, not a single person raised the obvious objection except an African-American model-who refused to don the giant lips and monkey ears. After the predictable uproar, two F.I.T. administrators were suspended, and  the school’s president, Dr. Joyce Brown (who is African-American) issued a public statement admitting that the Feb. 7 show, intended to demonstrate the work of recent graduates of the school’s M.F.A. program, “failed to recognize or anticipate the racist references and cultural insensitivities that were obvious to almost everybody else.”

Wait—if they were obvious to almost everybody else, why were they not obvious to anyone involved in the show?

2. This is how you become an ethics corrupter. British Prime Minister Boris Johnson and his girlfriend Carrie Symonds announced on Saturday they are expecting their first child together. The couple have been living together in Downing Street since Johnson became prime minister in July. Symonds is the first unmarried partner to live openly with a British leader since the bad old days of the Tudors.

If you want a nation to have fractured families, children without fathers and a general deterioration of the crucial societal building block of marriage, this is the way to do it. No, I am not impressed by the fact that the couple says it is engaged. Marriage first, children after. Any other sequence is irresponsible, placing the children and society at risk.

3. In case you missed it: That Chuck Schumer tweet that was supposedly deleted and that I highlighted yesterday was a hoax. You can read the correction and explanation here.

As is often the case, the hoax was convincing because it was consistent with the unconscionable carping by Democratic leaders (and the news media) at anything and everything the President and his administration has done and is doing to keep the Coronavirus at bay as much as possible. The concerted effort to undermine the efforts of the government has the inevitable effect of increasing anxiety by reducing trust in the competence and expertise of those dealing with the problem. It is dangerous and inexcusable. The number of false claims is shocking. Headlines have falsely claimed that the CDC experts have been “muzzled,” which they deny. The President’s selection of Vice-President Pence to oversee the outbreak control measures has been ridiculed because, among other things, he isn’t a doctor and is religious. Pence has experience overseeing health emergencies as a governor, and one does not have to be a medical professional to set up an efficiently functioning system. No, the President did not call the virus a “hoax.” No, the administration had not cut the CDC’s budget, as Joe Biden and others falsely claimed.

Here’s the Wall Street Journal on the partisan weaponizing of a health problem that should not be partisan (but if the Democrats think it can tale down Trump, “all’s fair”):

The evidence so far of bipartisan cooperation in response to the virus isn’t promising. Actually, it’s depressing. …Rep. Alexandria Ocasio-Cortez mocked Vice President Mike Pence, named by President Trump to lead the government’s response, as a science denier. Elizabeth Warren tweeted that the Administration’s “bungled response to the coronavirus outbreak is a mess.” Mike Bloomberg…chimed in that leadership is “sharing the facts, demonstrating control and trusting the experts. Unfortunately, not Trump’s strong suit.”….Sen. Schumer, almost at the same moment he was joining Speaker Pelosi in a plea to stop playing politics, went onto the floor of the Senate to re-rip into Mr. Trump, recycling his “towering and dangerous incompetence” line.

At his coronavirus news conference… Trump was joined by Anne Schuchat of the Centers for Disease Control and Prevention and Anthony Fauci of the National Institutes of Health. These are the government officials expected to plan and execute the U.S. response to the virus. Addressing the challenge, Dr. Schuchat said, America’s “aggressive containment strategy has been working and is responsible for the low levels of cases that we have so far.” She said we should expect more cases and now is the time to prepare.

….We suppose it’s to be expected that Members of Congress would default to arguing over coronavirus spending levels, parsing whether the right amount is $2.5 billion, $4 billion or $8 billion….But first the scientific community will have to better understand the nature of the virus, its ability to spread, and whether in fact it constitutes an extraordinary threat to the American people requiring extreme containment measures. Dr. Fauci said at the White House that we don’t even know whether the virus could survive the warmer months and reappear next year. He said they’re working faster than they ever have on developing and testing a vaccine that would be ready if it returns.

It’s a big challenge, but getting those answers right won’t be any easier if the coronavirus becomes no different than any of the other political footballs kicked constantly around the capital these days.