Good morning and I’m ticked off…

I know I ran that same clip recently. Never mind; when it’s appropriate, it’s appropriate. (The segment of “The Princess Bride” above is one of the top 6 ethics movie clips used on Ethics Alarms, the others being Otter’s declaration that it’s time to do something really stupid and futile (“Animal House”); “You know: morons!” (“Blazing Saddles”); the Devil speech (“A Man For All Seasons”); the Duke busting a bully in the face after saying that he wouldn’t (“McClintock”); and the Caine mutineers’ lawyer explaining that it is the duty of a crew to support their captain whether they like him or not (“The Caine Mutiny.”)

1. Do people know what “We’re in this together” means? I don’t think it means what they think it does. I just was sent an email copied in to 25 other people who I do not know, touting a 2015 Bill Gates TED Talk  about the dangers of viral contagions (as if his point hadn’t been made more vividly and earlier by Tom Clancy , Michael Crichton, and Stephen King. ) The letter also alluded to the “denier in chief” and once again flogged the Big Lie that the President  claimed that the virus was a hoax. The Pavlovian Deranged on the list immediately responded with short messages all echoing the theme of what an idiot Trump is.

I’ve had enough of this. I replied to all:

Of course, the smear that the President ever called the virus a hoax or fake news has been thoroughly debunked, not just by the Fox News shills but by the Associated Press, CBS and others. Yet supposedly intelligent and educated people keep repeating it.

Now if I were going to give a TED talk (and Gates was phoning it in, a TED talk for dummies—nothing he said hadn’t been thoroughly explained in various movies and novels), as a consultant on leadership and ethics, I would point out that in a nation or organization in any sort of crisis, using that crisis to take gratuitous, bitter cheap shots at the leader is near suicidal—bad citizenship, irresponsible, divisive, and destructive. Yet that is what about half the country, including the list here, is doing while patting themselves on the back like a pack of Mean Girls.

The job of the public in such a situation is to do everything it can to bolster a leader, no matter who he is, recognize that there are no certain solutions, understand that a balance has to be struck between brutal truth and the preservation of hope (You know, there was a lot to fear in The Great Depression besides fear itself, but the news media then did not mock FDR for saying so—by current standards, the Washington Post would list that statement as among Trump’s “lies”), and not undermine leadership when leadership is essential.

If, as seems to be the case, you lack the self-awareness to be ashamed of yourselves, I’ll be ashamed for you.

2. Ethics Dunce: Trader Joe’s. The market has by far the best pre-prepared meals around and the prices are reasonable, but the Lefty fascists who run the place have decided that they, not individual shoppers, are responsible for enforcing “social distance,” so a line forms outside the place an hour before opening, and the typical wait for the privilege of shopping there is an hour or more. The elderly are going to do well having to wait standing in 50 degree weather, but hey, this place is run by the young, for the young. I’ll miss their frozen beef and stout pies, but Trader Joe’s won’t be getting any more of the Marshall family business. Over at Safeway, shoppers were keeping a responsible distance just fine without supervision.

3. Notice to all: Ethicists should not be in the hobby horse maintenance business.  I say “should not be,” because sad experience has shown me that most ethicists will gladly defend whatever position their employers want to have declared “ethical.”

In a National Review piece called “Trump Needs a Bioethics Commission to Guide the Coronavirus Response,” the author, Jonathan Tobin, makes it clear why he wants such a commission.  “The lack of someone who is qualified to speak specifically to the moral and ethical issues raised by the pandemic in terms of dealing with shortages and the treatment of the elderly — who remain the group considered the most vulnerable to the disease — is potentially leaving the president without the sort of advice he desperately needs as the crisis becomes more acute,” he writes, “it becomes necessary to ask whether Americans — and in particular, an administration that has prided itself on its pro-life stance — will be willing to ignore Judeo-Christian traditions about the sanctity of life, including that of the elderly, to manage this crisis.”

“It becomes necessary to ask whether Americans — and in particular, an administration that has prided itself on its pro-life stance — will be willing to ignore Judeo-Christian traditions about the sanctity of life, including that of the elderly, to manage this crisis,” he continues.  “Treating the lives of older citizens as a precious and loved resource rather than as the property of a group that has lived too long to be of any use is an imperative for an ethical society, especially one that values faith as much as the United States. As the Trump administration copes with the pandemic, it must reaffirm religious and ethical values that ensure that respect for life also applies to the elderly.”

And if a genuinely objective ethics commission decides that after balancing all the considerations, protecting the elderly must be given lower priority than making certain that the economy survives and the contagion doesn’t spread out of control? Don’t be silly: you just make sure that you only hire bioethicists whose position you are certain about before you hire them!

4. I once called the Southern Poverty Law Center a hate group. It is certainly the embodiment of Eric Hoffer’s  invaluable observation that every cause becomes a business, and eventually deteriorates into a racket. 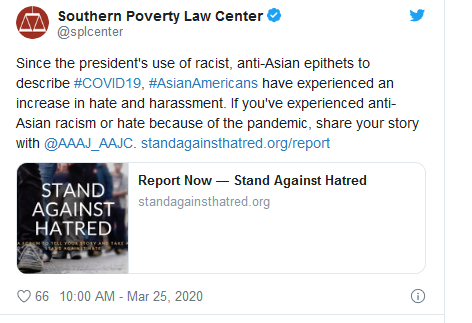 This is a flat out lie. (Of those 66 “loves,” maybe 24 were those clowns who got the email I discussed above.) How long will supporters of the discredited group tolerate this kind of blatant race baiting? Saying that China was responsible for loosing a dangerous virus on the world when that virus came from China is not anti-Asian racism. He has never uttered an anti-Asian “epithet,” and refusing to join in the progressive practice of suppressing facts and the truth because stupid and vicious people will react badly to them is standing up for American values. It is not racist in any way.