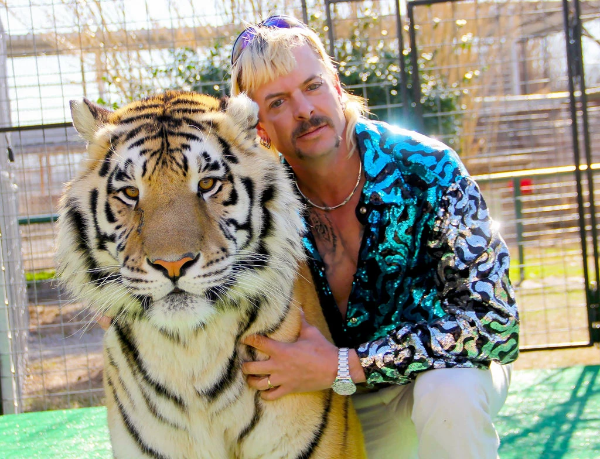 You should watch the current hit Netflix documentary “Tiger King” as an ethics exercise, if you can keep focused. It’s difficult. The seven episode horror show/freak show/ “Well, it’s time for another shower!” thing is rife with revelations about America and its culture as well as the infinite variety of humanity that breeds and mutates under rocks and over them. But it is also so teeming with freaks, sociopaths and morons that it often makes you feel like you are watching “The Anna Nicole Show” or one of the other reality shows that exploits its dumb, attention addicted stars.

Focus, Jack! Focus! There are a lot of ethics issues here, largest among them the icky exotic animals trade.  (Fun Fact!  There are more tigers in the U.S. than in the rest of the world combined. Now: Is that a good thing for tigers, or a bad thing?) There are also clinical cases of  corrupt business owners, narcissism on steroids, marriages that make Bill and Hillary Clinton look like John and Abigail Adams, toxic personalities (once you have met series star “Joe Exotic,” you may never think of anyone as a narcissist again…no, not even you-know-who), astounding hypocrisy, the infuriating twilight world of young, healthy people (well, physically healthy anyway) whose lives consist entirely of getting stoned or waiting to get stoned, abuse of the legal system, idiots with guns… the list is ridiculously, depressingly long.

They are all also either abusing the remarkable freedom provided them in America,  advertising it, or exposing it, depending on your point of view. These are grubby, desperate, valueless shadow people who are part of a large underclass some of us routinely ignore. It’s probably important to force oneself to look hard at it, as nauseating as it is, but the experience isn’t pleasant; the fact that 75% of the scenes include beautiful tigers, lions and ligers is a little like having a lovely soundtrack to a documentary about sex-trafficking.

The documentary appears to be fair, but like reality shows and the mainstream media, you don’t know what isn’t included. There is literally no one in the saga who isn’t grotesque and revolting in one way or ten. I can’t imagine any way you could present any of them that wouldn’t be grotesque and revolting, and the fact that the Tiger King himself, the worst of them all, eventually becomes endearing in his shamelessness gives us cognitive dissonance at its most corrupting.

The documentary-maker, Eric Goode, revealed  some of his biases when he told The New York Times, “In America, there are also definitely parallels between “I have a right to have a machine gun or a semiautomatic” and “I have a right to have a tiger,” a statement of staggering stupidity. The documentary doesn’t reflect that attitude, however, and the way several of the characters misuse firearms–one inadvertently shoots himself, fatally—would turn anyone into Beto “I’m coming for your guns!” O’Rourke.

Over all, “Tiger King” is a troubling reminder that ethically, it’s a jungle out there, especially in the fake wildlife jungles of deepest, darkest America.