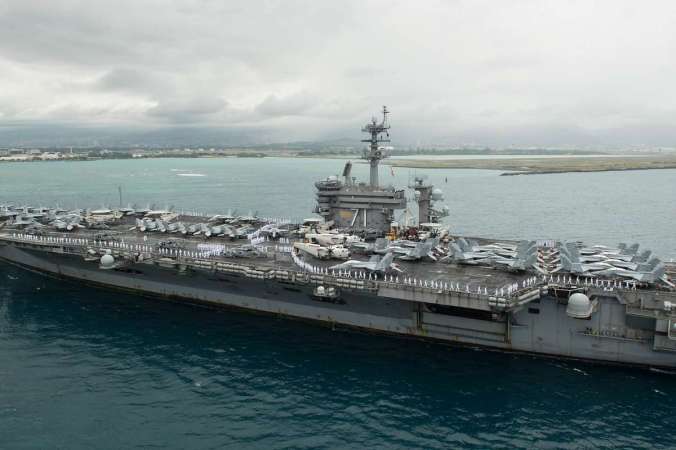 Captain Brett Crozier was the  commander of the aircraft carrier Theodore Roosevelt which had been docked in Guam following a Wuhan virus outbreak among the crew of more than 4,000. With about a hundred members of his crew infected, he decided to take the extraordinary step of sending a letter to the Navy pleading  for resources and to have the afflicted sailors quarantined from the rest. In the four-page letter sent via a “non-secure, unclassified” email that included at least “20 to 30” recipients in addition to the captain’s immediate chain of command, including some crew members.

Crozier wrote that only a small contingent of infected sailors had been off-boarded, with most of the crew remaining  on board the carrier, where following official guidelines for 14-day quarantines and social distancing was physically impossible. He wrote

“Due to a warship’s inherent limitations of space, we are not doing this. The spread of the disease is ongoing and accelerating…Removing the majority of personnel from a deployed U.S. nuclear aircraft carrier and isolating them for two weeks may seem like an extraordinary measure. … This is a necessary risk…We are not at war. Sailors do not need to die. If we do not act now, we are failing to properly take care of our most trusted asset — our Sailors….Keeping over 4,000 young men and women on board the TR is an unnecessary risk and breaks faith with those Sailors entrusted to our care.”

Of course, the letter leaked to the press, and the situation became a news story and a subject of unwelcome controversy for the Navy. Acting Navy Secretary Thomas Modly initially told CNN in response to questions about the appeal,

“I know that our command organization has been aware of this for about 24 hours and we have been working actually the last seven days to move those sailors off the ship and get them into accommodations in Guam. The problem is that Guam doesn’t have enough beds right now and we’re having to talk to the government there to see if we can get some hotel space, create tent-type facilities.”

Although the letter had the desired result, with members of the crew gradually being removed from the carrier, the Captain had broken the cardinal military rule never to go outside the chain of command. Crozier had multiple conversations with the chief of staff to Modly before his letter was publicized in the San Francisco Chronicle. The Navy had told Crozier to  “call us any time day or night,” and gave him  Modly’s personal cell phone number to update the situation and raise further concerns.

Then the e-mail leaked. Crozier was dismissed as captain by the acting Navy Secretary for what Modly called “extremely poor judgment,” going outside the chain of command, and  disseminating the memo over an unsecured system. President Trump backed his appointee’s unpopular decision.

“I thought it was terrible what he did, to write a letter. I mean, this isn’t a class on literature. This is a captain of a massive ship that’s nuclear powered, and he shouldn’t be talking that way in a letter. He could call and ask and suggest,” Trump told reporters.

As the captain left his carrier for the last time, the remaining crew cheered and applauded him.

Interestingly, Crozier’s letter was reminiscent of a similar episode in the rise of the iconic leader his carrier was named for, Theodore Roosevelt.

In 1898, Colonel Theodore Roosevelt was leading his volunteer army  of “Rough Riders” in Cuba. The Rough Riders, Roosevelt’s invention, were part of the Army’s Fifth Corps garrisoned near Santiago de Cuba. More than 4,000 of the Fifth Corps’ 4,270 soldiers were sick with malaria and yellow fever, and near death. The eight divisional commanders, including Roosevelt, were convinced that if the men remained in Cuba, the entire Fifth Corps would perish.

The divisional commanders met with Major General William R. Shafter, Fifth Corps Commander, and requested that Fifth Corps immediately redeploy to the United States.  President McKinley needed to maintain a military presence in Cuba until the United States’ peace treaty negotiations with Spain were complete, and following the meeting, the divisional commanders were convinced that their request would not get the speedy response required if the sick soldiers were to get timely medical attention.

Roosevelt either volunteered to compose a letter to Shafter, pleading the case in writing, or was talked into the job as the only volunteer among the commanders  with no military career to lose. He was also, of course, an accomplished author.

The letter, known as the Round-Robin letter and signed by all of TR’s fellow officers, read,

In a meeting of the general and medical officers called by you at the Palace this morning we were all, as you know, unanimous in our views of what should be done with the army. To keep us here, in the opinion of every officer commanding a division or a brigade, will simply involve the destruction of thousands. There is no possible reason for not shipping practically the entire command North at once. Yellow-fever cases are very few in the cavalry division, where I command one of the two brigades, and not one true case of yellow fever has occurred in this division, except among the men sent to the hospital at Siboney, where they have, I believe, contracted it. But in this division there have been 1,500 cases of malarial fever. Hardly a man has yet died from it, but the whole command is so weakened and shattered as to be ripe for dying like rotten sheep, when a real yellow-fever epidemic instead of a fake epidemic, like the present one, strikes us, as it is bound to do if we stay here at the height of the sickness season, August and the beginning of September. Quarantine against malarial fever is much like quarantining against the toothache.   All of us are certain that as soon as the authorities at Washington fully appreciate the condition of the army, we shall be sent home. If we are kept here it will in all human possibility mean an appalling disaster, for the surgeons here estimate that over half the army, if kept here during the sickly season, will die. This is not only terrible from the stand-point of the individual lives lost, but it means ruin from the stand-point of military efficiency of the flower of the American army, for the great bulk of the regulars are here with you. The sick list, large though it is, exceeding four thousand, affords but a faint index of the debilitation of the army. Not twenty per cent. are fit for active work.   Six weeks on the North Maine coast, for instance, or elsewhere where the yellow-fever germ cannot possibly propagate, would make us all as fit as fighting-cocks, as able as we are eager to take a leading part in the great campaign against Havana in the fall, even if we are not allowed to try Porto Rico.   We can be moved North, if moved at once, with absolute safety to the country, although, of course, it would have been infinitely better if we had been moved North or to Porto Rico two weeks ago. If there were any object in keeping us here, we would face yellow fever with as much indifference as we faced bullets. But there is no object.   The four immune regiments ordered here are sufficient to garrison the city and surrounding towns, and there is absolutely nothing for us to do here, and there has not been since the city surrendered. It is impossible to move into the interior. Every shifting of camp doubles the sick-rate in our present weakened condition, and, anyhow, the interior is rather worse than the coast, as I have found by actual reconnoissance. Our present camps are as healthy as any camps at this end of the island can be.   I write only because I cannot see our men, who have fought so bravely and who have endured extreme hardship and danger so uncomplainingly, go to destruction without striving so far as lies in me to avert a doom as fearful as it is unnecessary and undeserved.

Roosevelt delivered the letter to Shafter, and also  handed a copy of it to the Associated Press correspondent who was covering the Cuban campaign. Naturally, the reporter quickly cabled the letter to AP headquarters and it published nationwide the same day.

There was a news media-led furor accusing the McKinley Administration of not caring about the troops. President McKinley, furious but cornered, summoned his Secretary of War, Russell A. Alger, and ordered him to do what he could to make the problem go away. Alger ordered the Navy to send transport ships to retrieve the Fifth Corps from Cuba, and ordered the Army to prepare Camp Wikoff on Long Island to receive and care for the sick soldiers once they arrived back in the United States.

Far from being fired, Teddy returned from Cuba a hero, was elected Governor of New York, became McKinley’s Vice-President when Garrett Hobart, the original VP, died suddenly, and by 1901 was President of the United States.

[For some weird reason I had the wrong date, 1905, in the original.Thanks to David Elias for the correction.]

It may be small consolation, but there is no question that his former ship’s namesake would shouted “Bully!” at news of  Captain Crozier’s handling of the ship’s  health crisis.