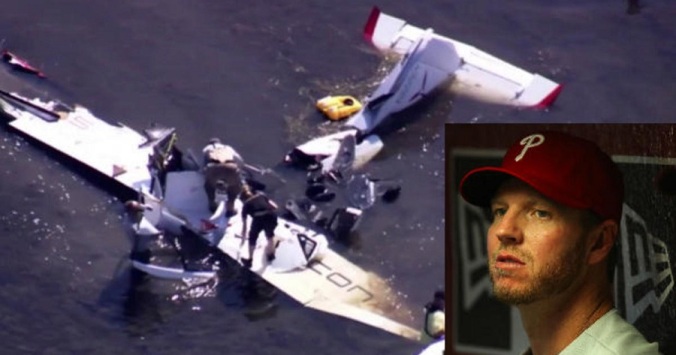 A week ago, I briefly discussed the report on the 2017 death of major league pitcher Roy Halladay who crashed his plane into the Gulf of Mexico  on Nov. 7, 2017. The 13-page report said Halladay had 10 times the recommended level of amphetamine in his system, plus an antidepressant, a muscle relaxant, a sleep aid and morphine.  He was also attempting aerial acrobatics and stunt flying.

Now his widow, Brandy Halladay, has issued a statement through the now Hall of Fame pitcher’s last team, the Philadelphia Phillies. She wrote,

“Yesterday’s NTSB report on Roy’s accident was painful for our family, as it has caused us to relive the worst day of our lives. It has reinforced what I have previously stated, that no one is perfect. Most families struggle in some capacity and ours was no exception. We respectfully ask that you not make assumptions or pass judgment. Rather, we encourage you to hug your loved ones and appreciate having them in your lives.”

From one perspective, it seems unkind to be critical of the lament of a grieving family member in the wake of such a tragedy. From another—mine—I can’t let public endorsements of multiple rationalizations like that one pass. I just can’t, and I have an obligation as an ethicist not to. It’s a dirty job but someone has to do it: the reason so people make terrible decisions by defaulting to rationalizations rather than ethics is that the culture marinates them, day after day, in these excuses for bad conduct. After a lifetime of hearing the contrived arguments , most people accept such self-deceptions as true. In turn, they engage in conduct, or excuse conduct in others, that causes extensive harm.

Mrs. Halladay’s statement is almost completely made up of  rationalizations, though the exhortation to appreciate loved ones while they are alive and present in your life is certainly beyond reproach. However,

The plea not to pass judgment is perhaps the worst of all. This is part of  #6. The Biblical Rationalizations:

“Judge not, lest ye not be judged,” and “Let him who is without sin cast the first stone,” have been quoted by scoundrels and their allies and supporters for centuries. Neither quotation means what those guilty of ethical misconduct would have us believe, but the number of people who accept the misreading is substantial. “Judge not, lest ye not be judged” (Matthew 7:1) is frequently cited to support the position that it is inherently wrong to judge the conduct of others. Of course, if this were indeed the intended meaning, it would rank as one of the most anti-ethical sentiments ever put into print, a distinction we would not expect from the Bible. For the very concept of ethics involves the development of customs and practices that evoke approval from one’s group and those in it, and there cannot be any approval without judgement. Judging the actions of others and communicating (and perhaps even codifying) that judgement is the way ethical standards are established and maintained. To use the Biblical text in this manner is to make ethical standards all but impossible

We constantly have to judge the conduct of ourselves and others to understand what ethical conduct is and should be. This particular instance is rather easy, or ought to be: no matter how painful it might be for the Halladay family to hear it, loading yourself up on drugs and flying an airplane, then doing loop-de-loops and buzzing boats, is irresponsible, reckless and unethical by any measure. I am perfectly willing to apply that same standard to myself.

The more embedded in our society rationalizations become, the more unethical society is. These automatic, thoughtless evocations of them seem harmless, but they are not. We should judge such statements appropriately harshly, for our own sake.

3 thoughts on “Rationalizations From The Victim Of A Tragedy”