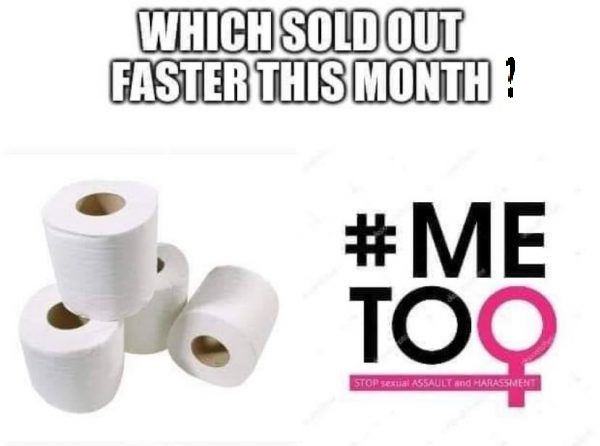 Former actress Rose McGowan, an alleged Harvey Weinstein rape victim, among the most dedicated #MeToo advocates, and a pariah in Hollywood for her penchant for calling out harassers (like Ben Affleck) and grandstanding hypocrites (like Alyssa Milano), directly accused Bill Maher of sexual harassment yesterday in a tweet:

This won’t trouble Maher or presumably his fans and viewers, because Maher has made it crystal clear for his entire, ugly career as a clown nose on/ clown nose off pundit that he doesn’t see anything wrong with sexual harassment. He believes women exist on earth for his convenience and pleasure. He is a pure misogynist, who has repeatedly called women who don’t conform to his ideological cast “cunts” and “twats” (as his audience guffaws). When Bill Clinton was battling through Monica Madness, Maher opined that Clinton should have said, ‘Yeah, I had sex with an intern, and I deserve to, because I’m President!” (Maher wasn’t kidding, just as Clinton  wasn’t kidding when he essentially confirmed Maher’s assumption by writing in his autobiography that he exploited Lewinsky “because he could.”) It goes without saying that Maher also thinks that #MeToo is a crock.

And I guess, based on so many of its vocal  supporters’ words and conduct recently, he must be right.

Do I believe that Maher said what McGowan claims? The former “Scream” star is perpetually furious, but she has also been consistently honest. Maher used (and probably still uses) his panels as a dating bar (Rose was really hot in the 90s), and his quote sounds like something he might say to an attractive  female guest; heck, he’s said worse on the air. Bill hasn’t responded yet; I bet that if he does, he’ll say something like, “Sure, I said it. Why shouldn’t I? It’s true!” And his peanut gallery will cheer.

This brings us to Maher’s pronouncement on his show last week regarding the Tara Reade accusation, which she elaborated on in a graphic interview with former NBC News and Fox News journalist Megyn Kelly last week.

“You waited 27 years. You think it couldn’t wait a few more months? That’s what I’d like to ask Ms. Reade. Why now? I’m not saying why not 27 years ago. I understand it can take victims years to come forward. I’m saying, why not before Super Tuesday? Why not last fall when we still had a dozen other candidates to choose from? Why wait until Biden is our only hope against Trump and then take him down?

I am not in favor of sexual misconduct accusations that come at conveniently-timed moments when they can do the most damage to the accused and are difficult to prove or disprove.  I do think I know why Reade may have waited until she did: she never thought in her wildest dreams that doddering, babbling, right-of-almost-all-the other candidates Biden could pander his way into the nomination, especially by her party that she thought was serious about #MeToo and would surely refuse to be so hypocritical as to nominate this creep…

…Democrats are coalescing around the position that this accusation must be thoroughly vetted for the party to keep its credibility…Well, you know credibility certainly is a problem for the party on this issue”…

Maher then noted that Democrats “‘woke’ themselves into a corner” by embracing “believe all women.” Ya think?

“That was never tenable because believing everything doesn’t make you noble, It makes you gullible and leaves us with the world where Republicans don’t care about this stuff. So it’s just a unilateral weapon that is used only against Democrats. Trump rides the bus with Billy Bush. We throw Al Franken under it.”

Yes, Bill, this is called holding people and organizations to their own stated principles and standards.   It’s like when people who have been lecturing us about staying at home and social distancing are caught doing the opposite. Never mind, I wouldn’t expect you to understand.

[An aside on media bias:In its Maher story, “The Hill” describes the Billy Bush video as “Trump was caught on tape talking to Bush in 2005 about grabbing women by their genitals.” No, Trump was talking about how male celebrities can get away with almost anything with attractive women, but The Hill is never above pushing a standard false anti-Trump narrative when it’s convenient.]

Maher also mocked The New York Times for its recommendation that the Democratic National Committee (DNC) investigate the claims against Biden.

“The New York Times is calling for the DNC to establish a truth panel on this. Truth panel, huh? Which part? Putin’s reverence for animals or how intoxicating he is to women?”

I suspect Maher is smart enough to know that what Reade has tweeted in the past about Putin is completely irrelevant to the truth of her Biden allegations, but he knows he’s arguing to idiots and the Trump Deranged, so he can get away with ad hominem arguments.

“I don’t know if you’ve noticed, but America has turned into a failed state that does a worse job keeping its citizens alive during a pandemic than Cambodia. And to me, that’s a little more important than Tara Reade achieving closure…Democrats are the party of choice, we can choose not to completely fuck ourselves over this.”

In this, Maher is stating the exact position of all of the Democrats who have endorsed Biden after previously proclaiming that principle and concern for women in the workplace demanded that Brett Kavanaugh be rejected  because of the unsubstantiated three-decades-old accusation of a woman who couldn’t even confirm that she knew him, or when and where the alleged teenaged assault occurred. It is the exact position I have read from Facebook friends who I once thought had integrity (and were smarter than this). It is the exact argument Linda Hirshman, supposedly a feminist, made in her truly stomach-turning op-ed, which was naturally used for an appeal to authority by the Trump Deranged on Facebook who can’t mount a persuasive argument on their own (though neither can Hirshman).

It is true:  Bill Maher’s position on Joe Biden is now the position of the Democratic Party and the mainstream news media. That means that their attitudes about #MeToo and their supposedly urgent–“Time’s Up!”— crusade to respect and protect women in the workplace are the same too: like Maher, progressived don’t really give a damn, except to the extent they can use these devices to take down political opponents. It is  just another convenient pose to attract voting blocks by deceiving them, like so many other positions (Reparations! Minimum Wage! Equal Pay! Green New Deal!). If Democrats really opposed sexual assault and harassment with the fervor and passion they pretended to for te previous two years, they wouldn’t be preparing to nominate a harasser, and according to Hirshman, a rapist, or referring to him as “their best hope.”

When you are “the party of women” and hope to elect a rapist as President of the United States, you are deeply, deeply corrupt.

This episode proves that the Democrats only genuinely believe in two things: gaining power, and using any means to do it.  It also has shown us that Bill Maher has more integrity than the Democratic party. He has always been a pig, and has never pretended to be otherwise.

8 thoughts on “Democrats Now Stand With Bill Maher On Tara Reade And Joe Biden, Which Tells Us All We Need To Know About #MeToo And Democrats”