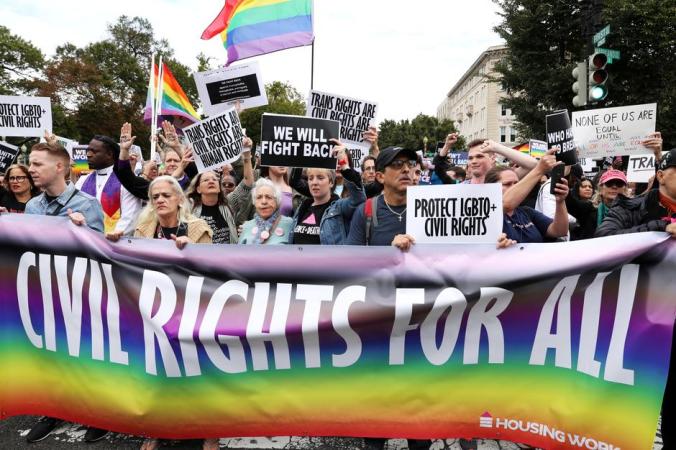 … which is sad. Gerald Bostock, Aimee Stephens and Donald Zarda, the appellants in the three cases decided yesterday, were discriminated against by their employers for no other reason than what they were, or had decided to be.  In a 6-3 decision, the Supreme Court decided that this breached  the landmark 1964  civil rights legislation which banned discrimination in the workplace on the basis of race, religion, and gender, or what the law called “sex.”

This morning I criticized the Times for a cut line  in its print edition that read “A Trump justice delivers an LGBT ruling that demoralizes the Right” as a gross exaggeration and “psychic news” —how does the Times know that conservatives are “demoralized”? However, I did recently encounter an article in The Federalist by a conservative who not only was apparently demoralized by the decision, but driven to the edge of madness. In all fairness, I thought I should mention it.

Joy Pullman, the author, is a Hillsdale College grad and an executive editor of the Federalist, which will lead me to be a bit more careful using the magazine as a source in the future.

As a preface, I note that Pullman isn’t a lawyer, and I see nothing in her background that suggests qualifications to analyze a Supreme Court decision. Indeed, I see nothing in the article that suggests that she read the majority opinion and the dissents. I’m guessing that she read a news article about the decision, or maybe a critical blog post. Well, a non-lawyer can only criticize a SCOTUS ruling according to his or her policy and ideological preferences. I don’t know why the Federalist would entrust an essay about the decision to someone like Pullman, though she is an executive editor.

In Monday’s ruling inserting “gender identity” into the word “sex” in a 1964 employment law, the U.S. Supreme Court called a man a woman, possibly leading to eventually forcing everyone else to do so also.

That’s the first sentence, and normally, if I didn’t have responsibilities to  Ethics Alarms readers, a sentence that dishonest and simple-minded would cause me to stop reading on the spot. “Gender Identity” was not so inserted, and in fact the term does not appear in the Court’s ruling at all. Nor is there any rational reading of the opinion to suggest that it could lead to anyone being “forced” to call a man a woman, though Justice Alito did raise that ridiculous hypothetical (and he should be ashamed of himself.)  I hope I’m not being overly technical to point out that compelled speech is a First Amendment issue, and that isn’t part of the SCOTUS decision or the issues of the cases involved at all.

The 6-3 majority included Chief Justice John Roberts, appointed by Republican President George W. Bush, and Associate Justice Neil Gorsuch, appointed by Republican President Donald Trump. These presidents promised voters their justices would uphold the rule of law and the Constitution, and were elected in significant part based on these now-broken promises.

A lawyer, but also a reasonably intelligent person, would recognize that nobody else can break your promise. All a President can promise is to appoint a qualified judge to the Supreme Court, and that the judge has a conservative orientation toward the law and a judge’s role in resolving legal controversies. To say that a President has broken a promise because a judge has not voted a particular way in a single case, or many cases, is infantile as well as ignorant.

Given all that has happened after Obergefell v. Hodges, which we were vociferously told was ridiculous to forecast — transgenderism immediately going mainstream, pushing religion inside the closet LGBT people were vacating, limiting people’s ability to freely express their faith and ideas, forcing education institutions to promote LGBT politics and behavior — it’s naive to think such scenarios will not quickly become reality as a result of this court decision.

This was the author’s “proof” that the parade  of horribles she (actually the religious right authorities she primarily relies on, as well as Justice Alito’s dissent), believes will certainly follow the Court’s ruling. She thus embraces the fallacy of post hoc ergo propter hoc, “after this, therefor because of this.” Obergefell v. Hodges did no more and no less than establish the right of gay Americans to wed the object of their affections like every non-gay American.

The movement for transgender rights was gaining momentum independently of the same sex marriage movement; if there is a connection, I haven’t seen a credible argument for one. People are as free to express their religion and faith as ever; if a religion or faith depends on the denigration of the humanity of others, perhaps it belongs in a closet. Education institutions should not be promoting any political agenda; they should be educating students about their rights and the rights of others. In the long march towards recognizing human rights, there have always been dissenters who want to teach their children to be bigots against one group or another. Again, you can’t blame Obergefell for that either.

Queer theory is now reigning U.S. employment law. This means it must also dominate all institutions of higher education that are not explicitly religious, both public and private.

Right. The decision means that we are now in thrall to the “gay agenda.”

No, all that happened is that the Supreme Court was presented with a clear cut example of unconscionable discrimination in the workplace that the 1964 Civil Rights Act only prohibited in principle, but not in its literal text, and decided it was time to fix the problem.

There is no question, none, that discrimination on the basis of sexual orientation or gender identity is exactly as offensive to the principles embodied in the Declaration of Independence and the Constitution as discrimination on the basis of race. In great part because of people like Pullman, politicians have been unable to mount the fortitude to address this problem, though it ought to be simple. The technical objections of the dissenters are worth making as a matter of jurisprudence— “I understand your argument, but right now, I am busy applauding,” wrote Ann Althouse in response to the Alito dissent—-but there are many examples of the Supreme Court deciding that something is obviously broken that it has the power to fix, so it fixes it.

The Court is a branch of government as well as a judicial body. The Court acted in its governmental role when it used its power to stop the potentially disastrous train wreck that the endless Florida recount was wreaking on the nation in 2000. (For all the evocation of Justice Scalia “originalism” in the dissents to Bostock, he voted to fix the problem in 2000.) That wasn’t the first time, nor will it be the last, that SCOTUS has taken some liberties to do the right thing when the right thing needed to be done. There can hardly be an example when such a decision was more justifiable that the cases decided yesterday.

Interestingly, Justice Kavanaugh, who wrote a dissent, acknowledged this in it:

Notwithstanding my concern about the Court’s transgression of the Constitution’s separation of powers, it is appropriate to acknowledge the important victory achieved today by gay and lesbian Americans. Millions of gay and lesbian Americans have worked hard for many decades to achieve equal treatment in fact and in law. They have exhibited extraordinary vision, tenacity, and grit—battling often steep odds in the legislative and judicial arenas, not to mention in their daily lives. They have advanced powerful policy arguments and can take pride in today’s result.

Not just them, though. All Americans, and the Court itself, can take pride that a persistent form of invidious discrimination that wrecked lives and families based on hate and ignorance is finally as illegal as other discrimination specifically outlawed in Title 7. Yes, it would have been better if Congress had taken action, just as it would have been better if Congress had integrated the schools. However, the Court taking action in these extreme cases to remedy injustice is not a sign that the Supreme Court will run amuck. Those, like Pullman, who claim otherwise are deliberately fertilizing anti-gay, anti-trans hysteria.

They don’t call them “justices” for nothing.

43 thoughts on “To Be Fair, Some Conservatives ARE Hysterical Over The SCOTUS Decision in Bostock….”