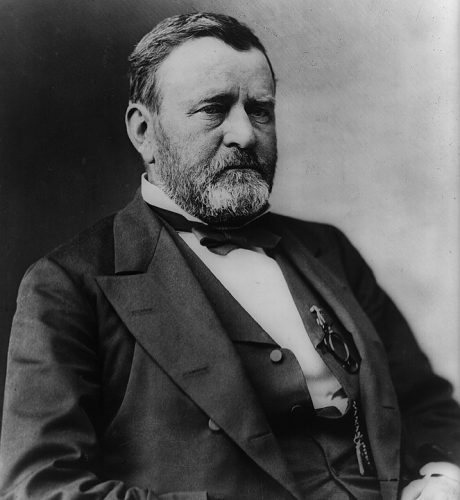 The toppling of a statue of our 18th President and the Civil War general who defeated Robert E. Lee, Ulysses S. Grant, in San Francisco should disabuse the historically literate of any misconception that all of the George Floyd demonstrators are concerned with “systemic racism.” Dishonoring Grant, as well as Francis Scott Key, whose statue also was pulled down, is signature significance for enmity toward the United States itself.

Steve-O-in-NJ performed a service for all of us by taking the time to provide a concise and informative summary of this important American’s life of public service for Ethics Alarms readers. There are several references to Ulysses S. Grant on the blog; the most extensive was this segment of the President’s Day post in 2015:

My son is named after Grant, arguably the nicest and most sensitive of our Presidents. (How this sensitive man was able to sacrifice his soldiers in the thousands to win the horrible battles he did is an enigma.) As a cadet at West Point he drew pictures of horses obsessively; in the field, he refused to allow any of his men to see him unclothed. He loved his wife passionately, and wouldn’t allow her to get her badly crossed eyes fixed, because “God made her that way.” When his daughter was married, he retired to his bedroom and could be heard sobbing for over an hour.

As President, he was fatally handicapped by his nature, which caused him to trust people he shouldn’t and allowed others to exploit his good nature. The result was several scandals engineered by his appointees and associates, including Crédit Mobilier and the Whiskey Ring. Yet he had a natural aptitude for leadership, as his superb autobiography proved on every page. He could manage and lead; what he was bad at was manipulation, deceit, pretense, and retribution—in short, politics.

In one odd area, his customary sensitivity was completely lacking. He hated music of any kind.

Here is Steve-O-in-NJ’s Comment of the Day on Item #4 in the post, “Saturday Ethics Freakout, 6/20/2020: Fake News, Resignations, Topplings And Cancellations…But Also Hope”:

Apparently a lot of people don’t know their Presidents or their Civil War history. The man on the statue in Richmond is Robert E. Lee, commander of the Army of Northern Virginia, and General-in-Chief of all the Confederate Armies. The man in the San Francisco Park, although likewise bearded and in the uniform of the time, is his polar opposite. Born Hiram Ulysses Grant in Ohio, he adopted the name Ulysses Simpson Grant when he was admitted to West Point to avoid the embarrassing initials H.U.G. Graduating 21st of 39, he never planned to be a career officer.

During the Mexican-American War, where he was “an untidy young captain” as opposed to Lee being pronounced “the very finest soldier I ever saw in the field” by General Winfield Scott, and which he opposed as a land grab, he discovered he was actually a skilled officer, and began to change his mind about what he would do for a career. However, he left the army in 1854 after he was found drunk on duty and offered the choice of resigning or being court-martialed.

For the next seven years, Grant struggled between farming, real estate trading, and a few other things, none of which he was very good at. At one point he pawned his gold watch to buy his family Christmas gifts. He did not vote for the first Republican candidate for the presidency, John Fremont, because he could see this would probably lead to the country splitting in two. He did during this period acquire a slave named William Jones from his father-in-law. However, he found he didn’t have it in him to force him to work, and manumitted him before a year had passed. As the election of 1860 approached, he found himself becoming increasingly opposed to slavery.

Grant was a civilian when the Confederates fired on Fort Sumter, and initially Lincoln’s top military officer, George McClellan, turned down his request to be recommissioned. However, before the month was out, the governor of Illinois made him his military aide and a colonel, tasked with mustering in the Illinois militia. By August, old General Fremont, who he hadn’t voted for, made him a general himself and a district commander. That November he won the first major Union victory of the war at Fort Donelson. The following April his victory in the bloody Battle of Shiloh (for which he was roundly called a butcher and accused of drunkenness again) killed Confederate hopes of conquering the Mississippi Valley. That November he assumed command of the Army of the Tennessee, and ordered freed slaves to be incorporated into the ranks.

You probably know or should know the rest: the taking of Vicksburg, the brief reverse at Chickamauga, the taking of Chattanooga, his naming to supreme command (btw, before this, only Washington had held the three-star rank), and the slow, methodical advance into the South on five fronts. It took a year and was not without some reverses and mistakes, but ultimately he forced the Army of Northern Virginia under Robert E. Lee to withdraw from the Confederate capital at Richmond and flee west. On April 9, 1865, Lee tried to break through the Union cavalry screen, but was forced to abort the attack when he topped a ridge and saw two untouched full corps of Union infantry. He had no choice but to surrender.

Grant was actually heartbroken to receive the surrender of a man he had served with, even though he considered the Southern cause one of the worst ever fought for. He granted generous surrender terms, including letting the officers keep their personal sidearms and the soldiers keep their horses. He also stopped all celebration among his own men, reminding them that the rebels were now their countrymen again. He later personally opposed any attempts to try Lee and his officers for treason, since he had promised otherwise at the time of the surrender.

He actually became Secretary of War for a time during the presidency of Andrew Johnson, but issues with the appointment led to a complete break between the two men. He remained popular, though, and was elected the next president, in an attempt to unify the nation. During his presidency he actively fought the Ku Klux Klan and fought for civil rights for the freedmen, including the Fifteenth Amendment. His policy toward the Indians unfortunately fell apart in his second term. His reputation among historians was low until recently, due to scandals among his cabinet. It has enjoyed a revival recently, starting with a biography by Edward Jean Smith in 2001.

So, what do we take away from this long story (which could be a lot longer)? Ulysses S. Grant was, like all men, human, and like most humans, had feet of clay. Like most men, he passed through some difficult times, some of which were his own fault, and, like most men, he was probably given some opportunities that he might not have deserved. However, I can confidently say that he made more than the most of his second chance in the US Army, and was the right man at the right time to deal with the greatest crisis this nation has ever faced on the battlefield. He was as good a strategist and tactician as Lee, he just had the good fortune to have at least three lieutenants who were almost on the same level (Sherman, Thomas, Sheridan), while Lee had only the one (Jackson, whose loss he never recovered from). I can say with confidence that he was a man of his word, even when it might have been expedient not to be. I can also say with confidence that he did the best anyone could with the almost impossible task of putting a broken and embittered nation back together again.

He never betrayed the oath he swore twice, and he never once considered turning against his nation, although he did leave its service for a time. He never struck a blow against a fellow American, save one who was in open rebellion. He was not in sympathy with the Southern cause, and thought it was wrong, however, in the end he realized that continued hostility toward the defeated states would be counterproductive. He did not display any particularly racist attitudes or belief that one race was superior to another, in fact he incorporated freed slaves into his army.

Arguably, the one thing he did that seems unforgivable now is own a slave he was given for less than a year, and not be against slavery from the get-go. Other than that, he was a hero, a great captain, and a statesman.

So why, I ask, did his statue meet the same fate as those of several of his opponents on the battlefield, who DID break the oath they swore and were, in very big part, fighting for the right of man to own man, against the duly elected government?

Was it simple ignorance, that led to him being lumped in with the other side because he came from the same time and the uniform looks similar? Was it just mob mentality that led to the destruction of anything that could easily be destroyed? Or was it something else, something far more sinister?

However, it’s obvious that the current movement, or whatever you’d like to call it, has moved FAR beyond justice for Floyd or even an advance in racial justice. At this point it’s about a cultural revolution, that seeks to destroy everything that predates, oh, I’d like to say 1964, but I think even that’s a stretch, as individuals get targeted for things they said or did as recently as the 1970s and 80s. It’s also a movement that destroys unfairly, with individuals declared evil and unworthy for acts that were relatively small compared to the good they did, or the great things they achieved, or for being people of their time, or for something as small as one stupid or insensitive statement or one attempt at a dress-up episode that is no longer considered acceptable, while those held up by the movement as heroes are above criticism, despite the fact that they may have done some very wrong things, and really not much that is significant beyond being a victim of a bad act.

I spoke three years ago about the left wanting a monopoly on honor. That attempt then failed. This is an attempt to gain not just a monopoly on honor, but complete control by destruction and intimidation. If you are deemed unsuitable, you will be erased. If you disagree, you will be punished. We can only hope that, as this nation began to suffer from “quarantine fatigue” and has decided that enough is enough, this lockdown is over, that it will start to suffer from “mob fatigue” and say enough is enough, no more tearing everything in sight apart.