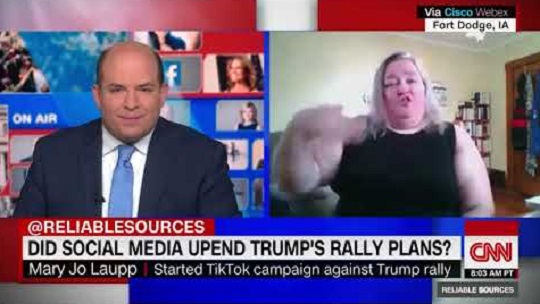 What Ethics Alarms terms the Axis of Unethical Conduct or AUC—the alliance of the Democratic Party, “the resistance” and the mainstream news media—reached a new low in hostility to democracy and  new high in hypocrisy yesterday after it was confirmed that the turnout for President Trump’s campaign rally in Tulsa had been undermined by Nixon-style “dirty tricks.”

Yesterday morning, the front page of the Times was gloating over the surprisingly small audience for the President. Written by a team including staff Trump assassin Maggie Haberman,  the story, which yesterday had a headline stating that the rally “sputtered” and on line says it “fizzled,” said in part, “The weakness of Mr. Trump’s drawing power and political skills, in a state that voted for him overwhelmingly and in a format that he favors, raised new questions about his electoral prospects for a second term at a time when his poll numbers were already falling.” It quickly became clear that there were sinister factors at work, but the reporters allowed confirmation bias to suppress what should have been an automatic instinct: “Gee, what could have caused this?” Instead, they went with an analysis based on their desires and hostility to the President, and presented readers with fake news.

“And it seems that one of the other reasons why there were so many empty seats is a no-show protest. A no-show protest. This all started with a video on TikTok created by Mary Jo Laupp, who is effectively being called a ‘TikTok grandma.’ So, she made a video more than a week ago urging viewers to go to Trump’s site, sign up to attend the rally, but pointedly not show up at the rally. And look, it did seem to work to some degree. We don’t know exactly how well but Trump’s campaign manager Brad Parscale was out there talking about how many people were signing up…..

In a tweet, Parscale had announced that there had been 800,000 requests for tickets.

Stelter then rewarded the organizer of this operation by bringing her on his show to interview. Her rationalization for the dirty trick was that black activists were angry because the President had scheduled his rally on the same week as “Juneteenth,” that revered annual holiday that virtually no one, including CNN, had ever talked about before the George Floyd Freakout.

“Do you think this is how it’s going to be from now on, whenever the President holds a rally there’s going to be this attempt to prank him, to troll him, to trick him,”  Stelter mused. “So, really a form of protest, and what we’ve seen as a protest. We don’t know how much of an impact it had but it clearly had some impact in Tulsa.”

Ah! It’s a protest! Just like the looting and rioting was part of a “mostly peaceful” protest. Protests are good!

Lincoln Project co-founder Steve Schmidt, the former McCain campaign manager who is continuing his late boss’s vendetta against Trump along with other “NeverTrumpers” like George Conway, was positively giddy, tweeting,

He added, “This is what happened tonight. I’m dead serious when I say this. The teens of America have struck a savage blow against @realDonaldTrump. All across America teens ordered tickets to this event. The fools on the campaign bragged about a million tickets. lol.”

The dirty tricks that the Nixon campaign used to sabotage various Democratic opponents was regarded by the news media as evidence of his ethic void and an assault on democracy. Donald Segretti was hired by his friend Dwight L. Chapin to run  the dirty tricks operation, which Segretti referred to as “ratfucking.”  He went to prison for fraud. Now the AUC is applauding the same kind of conduct, endorsing the Nixon Watergate philosophy that “the ends justify the means.”

Ironically, just a few months ago, CNN Business warned: “TikTok could threaten national security, US lawmakers say.” It is, after all, a Chinese app. CNN reported that there was a bipartisan concern that TikTok could be used by the Chinese government to meddle in U.S. elections.

But this was great!

Here’s the future face of the Democratic Party cheering on ratfucking:

The same thing is rampant on Facebook. The same people who claim democracy was imperiled by “Russian interference” are raving about how cool it was that a Chinese owned social media site’s users  prevented Americans from going to a Presidential campaign rally.

“The resistance” has corrupted them all, along with hate and unethical journalism. These are ruthless, hateful, cynical people, and our system of government may never recover if they gain power in November. The AUC is so brazen now that it apparently think there will be no adverse consequences of the American public realizing that it has no respect for the integrity of our election process.

I continue to believe that it is mistaken.

21 thoughts on “Nearing The Abyss: The Democrats, “The Resistance” And The Media Cheer On Campaign Sabotage”