As various wags have noted recently, the partisan, ideologically-driven and deliberately manipulative mainstream news media isn’t even trying to hide its bias any more. It openly is taking sides, and the news media isn’t supposed to take sides when reporting events. Nor is it supposed to frame what it reports in ways that warp a reader’s comprehension of it.

Two details are notable in the items above. First, the Post report refers to the individuals as vandals or engaging in vandalism rather than as protesters, as was the apparently agreed upon terminology when describing various statues being defaced or toppled. This was a typical report:

Second, the race of the protesters is never mentioned unless they are white…and, as the previous post demonstrated, sometimes the report attempts to make the reader think a white-supremacy minded  individual engaged in wrongful conduct even when the miscreant wasn’t white.

There was a third bit of sinister misdirection in the evidence above; at least it fooled me. Slogans painted in block letters on a street do not constitute “murals.”  When I read the media reports, I assumed that artwork was destroyed.

This is a mural:

This  (in D.C.) is government propaganda: 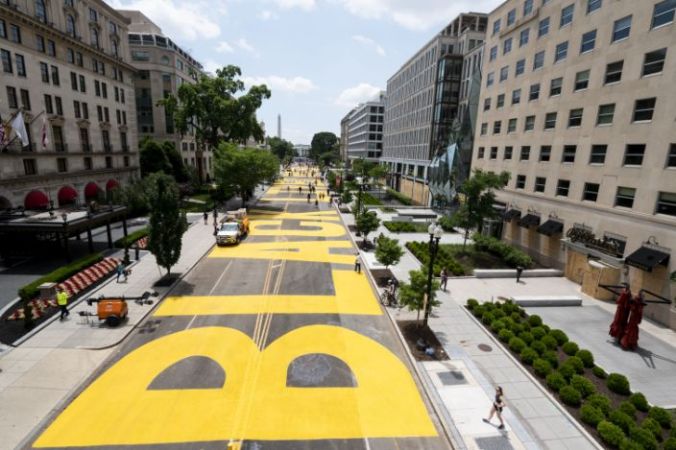 Streets don’t count, yet somehow multiple news media sources deci—all on their own!—to use a word that was  misleading, and made the act seem like something other than it was. What a coincidence!

It did nor require an artist to create this “mural, “or to design it;  it took a few government employees with yellow paint and big stencils. In fact, I’d be tempted to call painting political slogans on public streets vandalism by the government. Legal vandalism.

The stories also demonstrate that the city governments and the news media are allied, which should make fans of democracy nervous. Police aren’t looking for those peaceful protesters who tore down the Christopher Columbus statue in Baltimore’s Little Italy and threw it in the bay, but the police have the bloodhounds out for the pair of white vandals who painted over “Black Lives Matter.”