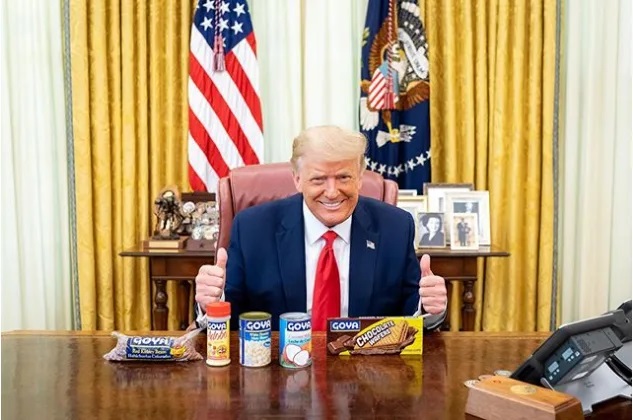 (Yes it’s unethical, but that photo just cracks me up.)

The United States Office of Government Ethics, which has the responsibility of “preventing conflicts of interest in the executive branch,” has among its guidelines ,

The provision is clear, and I think obviously, necessary. Yet after anti-Trump zealots announced a boycott of Goya, the largest Hispanic-owned company in the U.S., after the company’s CEO Robert Unanue praised President Donald Trump in a Rose Garden event last week, the First Family went to extraordinary—and unethical—lengths to support the “buycott”  that conservative groups launched in response.

First, White House adviser Ivanka Trump posted a photo of herself holding a can of Goya black beans this week, captioning it, “If it’s Goya, it has to be good” along with the  translation, “Si es Goya, tiene que ser bueno.” 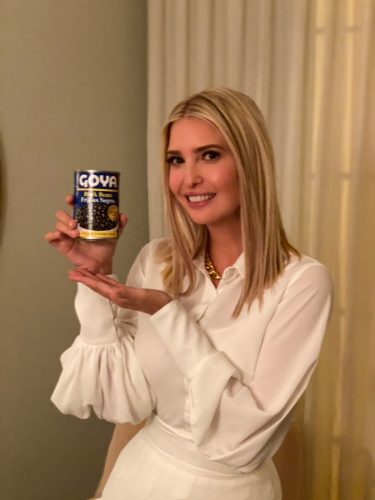 Quick like a bunny, the  Citizens for Responsibility and Ethics in Washington filed a complaint with the Office of Government Ethics, and went to news outlet after news outlet explaining what an outrage this was. I would applaud CREWs’ dedication to ethics compliance if it were not the hypocritical, partisan/ fake non-partisan “watchdog group”  that it is, as has been documented here many times. I’ll start taking their outrage seriously when they start filing complaints against Democrats. Still, in this case, it was right.

After such a complaint, there is supposed to be an investigation. The ethics office would send a letter to the White House’s designated ethics official rsuggesting disciplinary actions. The White House counsel’s office would be involved, and if the violation were considered serious, the employee “may be imprisoned, fined, demoted, or fired for violating an ethics provision.” For holding up a can of beans. “Beangate.”

Former director of the Office of Government Ethics Walter Shaub, whom I assumed was in a rubber room by now since the Trump Administration’s disinterest in ethics  has been annoying him since Inauguration Day, 2017,  flatly stated that “the Goya tweet was an ethics violation.”

Shaub noted that despite the fact that both the First Daughter’s Twitter and Instagram accounts contain disclaimers that they are personal pages, it’s “a bad idea to include your title in the bio because that’s a factor weighing in favor of finding a violation occurred….If you tout the company’s product in an obvious response to the backlash the company is facing for the CEO’s remarks about your father-president, you knowingly link your account in people’s minds to your official activities; you create the appearance of official sanction.

He added that there is a “strong appearance” that Ivanka was endorsing the product in her official capacity and she is clearly in violation of the misuse of position regulation.

Naturally, the White House claimed that she was not in violation since her endorsement was “personal.” Of course she was violating the rule. I would have more respect for a response of, “Yes, Ms. Trump broke the rule and promoted a can of beans to counter a disgusting effort by assholes to punish a minority-owned business because its owner supports the President of the United States.  We are proud of her.” In any event, as CREW even acknowledged, the chances of her being punished by her father are about the same as the odds of Joe Biden getting to the end of “I am the very model of a Modern Major General” without a teleprompter.

The President’s photo, however, is exempt from the ethics rules. It’s just incredibly, wildly, blatantly, in-your face unethical. For the President to use not only his position but the Oval Office to endorse any company’s product is an abuse of power and position, and lowers the prestige and image of the Presidency. He would defend the photo, I’m sure, saying something like, “Ethics Shmethics. I have the ability to prevent the attempted  harm and  harassment of a Hispanic-American success story being inflicted by assholes because the owner is a patriot, and it’s the right thing to do. I’m President, I can do it, so I did. Tell Nancy Pelosi to impeach me.”

And to be honest, he would have a point.