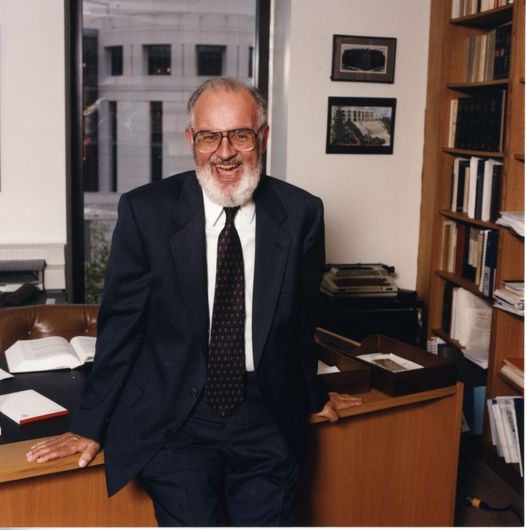 I learned recently that my friend, mentor, teacher and my first boss David J. McCarthy, Jr. died on October 1, at the age of 84.  The key word here is probably mentor, but I’m not certain I have the perfect word for David. What do you call the person who probably did as much to influence the course of your life, all positively, than anyone else other than your parents? That was him. I know: I understand the real meaning of “The Road Not Taken.” It’s possible, even likely, that I would have ended up in the same place, or close to it, without someone pointing me to a path I had never considered at a point when I was desperately looking for options. But if a butterfly flapping its wings in the Amazon can cause a hurricane in Milwaukee, David McCarthy was the pterodactyl flapping his wings who changed, literally, everything in my life.

David McCarthy was my first year torts professor at Georgetown University Law Center, and my favorite prof in the classroom; he was witty, theatrical, quick and demanding. Unlike a couple of other professors, he did not know me well, and yet when he was appointed the new Dean of GULC in 1975, the year I graduated, he offered me the job as the first Director of Development in the law school’s history.

I was known to him, and everyone at the school, as the weird student who had devoted his law school years to founding a theater company and directing its productions, leading to a very mediocre academic record but a lot of gratitude from the law school community. Incredibly, the school had never had its own capital giving program directed at raising money from law school alumni, and it had a lot of famous and wealthy ones. Dean McCarthy, faced with opposition from the main campus to his plan of hiring a recent grad and a lawyer for the task rather than a professional fundraiser, explained that first, only a fellow Georgetown lawyer could credibly approach other Georgetown lawyers, and second, as he told me, “Anyone who can convince law students to devote so much time to rehearsing Gilbert and Sullivan shows can talk anyone into anything.”

I thought I had left Washington, D.C. forever for my beloved Boston, but an expected job had fallen through, and David’s crazy idea sounded intriguing. (Naturally, my risk-loving father advised me to take it.) I did, and never got back to Boston except on business trips and holiday, I met my wife here; I started my theater company here; all of the jobs, friends, associates and adventures that led me to ethics as a career were here.

Dean McCarthy and I got to know each other well: I traveled with him, shared hotel rooms with him, had after-work discussions with him, and was invited to his home, where I sang while he played the piano. I even directed him in a show (a memorable cameo as “Bunthorne’s Solicitor”) in “Patience,” in 1976. Most of all, I learned from him and laughed with him; Dave was a natural comedian. He supported me in various scrapes with Georgetown U., and once gave me a speech that I repeated almost word for word to my son Grant decades later.

“You force people to take you as you are,” he said, “and you don’t want to lose that. But you will always pay a price, and sometimes it will be a steep one. It is usually easier succeeding if you conform and follow the crowd, but if you have the guts to go your own way and the character to know right from wrong, you’ll ultimately end up where you belong.”

After seven years, David found my next career step, persuading his neighbor, US Chamber exec Tom Donohue, to hire me to run his policy research foundation.

David and I were only occasionally in contact after that, but when he stepped down as Dean and retired, I was one of those honored with an invitation to his retirement dinner. I honestly don’t know that I ever told David how grateful I was for everything he had done for me. I don’t think so. I am heartened by the knowledge that David was uncommonly perceptive, and brilliant as well. I’m sure he knew.

Thanks, Dave. For everything.

And I’m not exaggerating.

You can read about David J. McCarthy here.