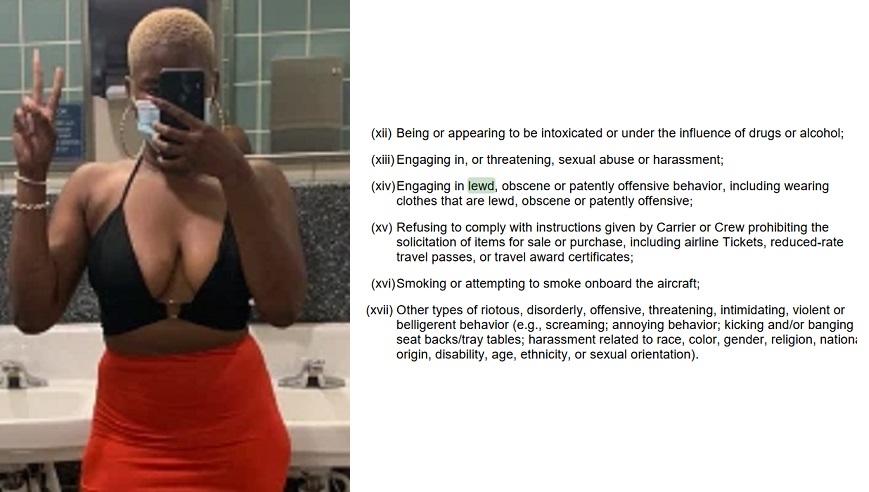 Chicago’s Kayla Eubanks is indignant because Southwest Airlines staff refused to allow her to board her flight, saying her attire was not fit for travel. low-cut top was “lewd, obscene, and offensive.”  Eventually a pilot gave her a cover-up T-shirt so she could get on the plane. Once in the air, she took it off.

Eubanks complained via Twitter, writing, “Y’all I was KICKED OFF my @SouthwestAir flight because my boobs are ‘lewd, obscene, and offensive.’ I was told that passengers may look at me in my attire and be offended.” In her following tweets, Kayla wrote,

“I really wanna know why @SouthwestAir is policing my clothes like this. How will my shirt impact my flight, for myself, the other passengers, or even the pilot?…Y’all have a dress code for CUSTOMERS who pay to get on a plane?…It’s the constant policing of women’s bodies for me.”

Posting a  video of one of Southwest’s female gate employees fumbling to answer Eubanks’ questions about a dress code, Kayla added. “[she] practically did cartwheels to ensure that I wouldn’t get on this plane y’all. I was held at the gate for 30 minutes because of my shirt.”  On the video, Kayla can be heard telling the sympathetic pilot who eventually loaned her the shirt, “I have to leave my tits at home? Obviously not.”

Following the flap, in which the mainstream media sympathizes with Eubanks, a spokesperson for Southwest Airlines told the New York Post that the company reached out to Eubanks directly to issue an apology, and refunded Eubanks’ fare

“Regarding our policies, each situation is very different, and our employees are responsible for following our Contract of Carriage, available on our website,” the spokesperson explained. “According to the material posted online, the company ‘may, in its sole discretion, refuse to transport, or may remove from an aircraft at any point,’ a passenger who engages ‘in lewd, obscene, or patently offensive behavior, including wearing clothes that are lewd, obscene, or patently offensive.”

1. First and foremost, Kayla Eubanks is a slob. In fact, she is the worst kind of slob, a self-righteous one. She is proud of her right to show now respect for the public whatsoever, and to ignore basic civil standards of decorum.

2. Her attire would be inappropriate in any workplace but a strip joint, a public library, a bus, a grocery store, a restaurant, a movie theater or a city street. It would be in poor taste at a community swimming pool. Of course it is inappropriate on an airplane. That she appears to believe otherwise is an indictment of her upbringing and our rotting culture.

3. However, she is technically correct that in the absence of a clear and well-publicized dress code that cannot be misunderstood prohibiting such rude clothing, Southwestern has no business harassing her.

4. Would the woman’s boobage have been regarded as lewd and obscene and patently offensive once in the misty past? Indeed. That time, however, is past. Now, we have to depend on such ethical values as respect for others, civility and life competence, and people like Kayla—narcissist slobs and proud of it—cannot be trusted to cooperate.

5. Airplanes should issue unambiguous dress codes in the interest of their passengers’ comfort, but dress codes of all kinds in any setting have been falling by the wayside. I wear a jacket when I fly (if I recall correctly, since I haven’t been near a plane since March). I also wear long pants, and footwear that does not show my toes. That’s how I was raised to believe you show respect for strangers, a practice that contributes to a civilized society.

6. Naturally, feminists have done their part to champion the right to be vulgar.

7. In the end, air travel companies have decided that they would rather pander to the slobs among us than help enforce basic civility. They allow the Kaylas among us to lower standards of public comportment ever closer to the gutter.

8. This, I believe, is “tolerance.” Kayla Eubanks neatly demonstrates that at its margins, tolerance is not a guaranteed virtue.