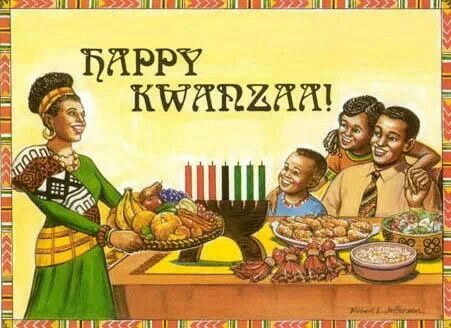 Kwanzaa, which I began becoming faintly aware of when I was in the administration at Georgetown University and we had to include it in any holiday greetings, was always a phony holiday, packaged as and often claimed to be an authentic African alternative to Christmas when it was really a made-up event by an American in America. It’s not celebrated in Africa; it’s not celebrated anywhere but in the United States, The extra “a” at the end was just tacked on to make the thing seem more authentic, like the fake name “Häagen-Dazs.”

Here’s how one source describes in part the “holiday’s” founding on December 26, 1966:

The first day of the first Kwanzaa [was] celebrated in Los Angeles under the direction of Maulana Karenga, the chair of Black Studies at California State University at Long Beach. The seven-day holiday, which has strong African roots, was designed by Dr. Karenga as a celebration of African American family, community, and culture. He founded US, a Black cultural organization, and looked to Africa in search of practices and concepts that might empower and unite the nation’s African American community. Inspired by Africa’s harvest celebrations, he decided to develop a nonreligious holiday that would stress the importance of family and community while giving African Americans an opportunity to explore their African identities…The name Kwanzaa is derived from the phrase matunda ya kwanza, which means “first fruits” in Swahili. Each family celebrates Kwanzaa in its own way, but celebrations often include songs and dances, African drums, storytelling, poetry readings, and a large traditional meal. On each of the seven nights, the family gathers and a child lights one of the candles on the kinara, or candle holder, then one of the seven principles is discussed. The principles, called the Nguzo Saba, are values of African culture that contribute to building and reinforcing community among African Americans. These values include unity, self-determination, collective work and responsibility, economic cooperation, purpose, creativity, and faith. An African feast, called a Karamu, is held on December 31. Today, Kwanzaa is celebrated by millions of people of African descent all across the United States and Canada.

Here’s how Karenga described his creation to the Washington Post:

“I created Kwanzaa,” laughed Ron Karenga like a teenager who’s just divulged a deeply held, precious secret. “People think it’s African. But it’s not. I wanted to give black people a holiday of their own. So I came up with Kwanzaa. I said it was African because you know black people in this country wouldn’t celebrate it if they knew it was American. Also, I put it around Christmas because I knew that’s when a lot of bloods would be partying!”

He didn’t even try to make the “holiday” culturally or historically consistent. The late conservative commentator Tony Snow explained,

There is no part of Kwanzaa that is not fraudulent. Begin with the name. The celebration comes from the Swahili term “matunda yakwanza,” or “first fruit,” and the festival’s trappings have Swahili names — such as “ujima” for “collective work and responsibility” or “muhindi,” which are ears of corn celebrants set aside for each child in a family.

Unfortunately, Swahili has little relevance for American blacks. Most slaves were ripped from the shores of West Africa. Swahili is an East African tongue.

To put that in perspective, the cultural gap between Senegal and Kenya is as dramatic as the chasm that separates, say, London and Tehran. Imagine singing “God Save the Queen” in Farsi, and you grasp the enormity of the gaffe.

Worse, Kwanzaa ceremonies have no discernible African roots. No culture on earth celebrates a harvesting ritual in December, for instance…The inventors of Kwanzaa weren’t promoting a return to roots; they were shilling for Marxism. They even appropriated the term “ujima,” which Julius Nyrere cited when he uprooted tens of thousands of Tanzanians and shipped them forcibly to collective farms, where they proved more adept at cultivating misery than banishing hunger.

Even the rituals using corn don’t fit. Corn isn’t indigenous to Africa. Mexican Indians developed it, and the crop was carried worldwide by white colonialists.

Snow concluded, “Our treatment of Kwanzaa provides a revealing sign of how far we have yet to travel on the road to reconciliation. The white establishment has thrown in with it, not just to cash in on the business, but to patronize black activists and shut them up.”

Bingo! That’s what I saw at Georgetown: white liberal administrators embracing Kwanzaa to avoid confrontations with an increasingly militant and demanding black student body. The fake holiday was an early device to pull blacks and whites apart, encouraging African-Americans to reject Christmas, one of the primary unifying events in American culture. Kwanzaa wasn’t the only factor or even one of the most influential, but it helped grease the slippery slope to where we are now: Al Sharpton, Black Lives Matter, racial spoils, anti-white bigotry, the 1619 Project, the Trayvon Martin/Mike Brown/ George Floyd extended ethics train wreck, and more.

“Deborah Jones, who once was given the Swahili title of an African queen, said she and Gail Davis were whipped with an electrical cord and beaten with a karate baton after being ordered to remove their clothes. She testified that a hot soldering iron was placed in Miss Davis’ mouth and placed against Miss Davis’ face and that one of her own big toes was tightened in a vise. Karenga, head of US, also put detergent and running hoses in their mouths, she said.”

Nice creator! But most celebrants of Kwanzaa don’t know any of this, because the mainstream media is afraid it will be called racist if it reports the truth.

17 thoughts on “Kwanzaa, The Unethical Holiday”