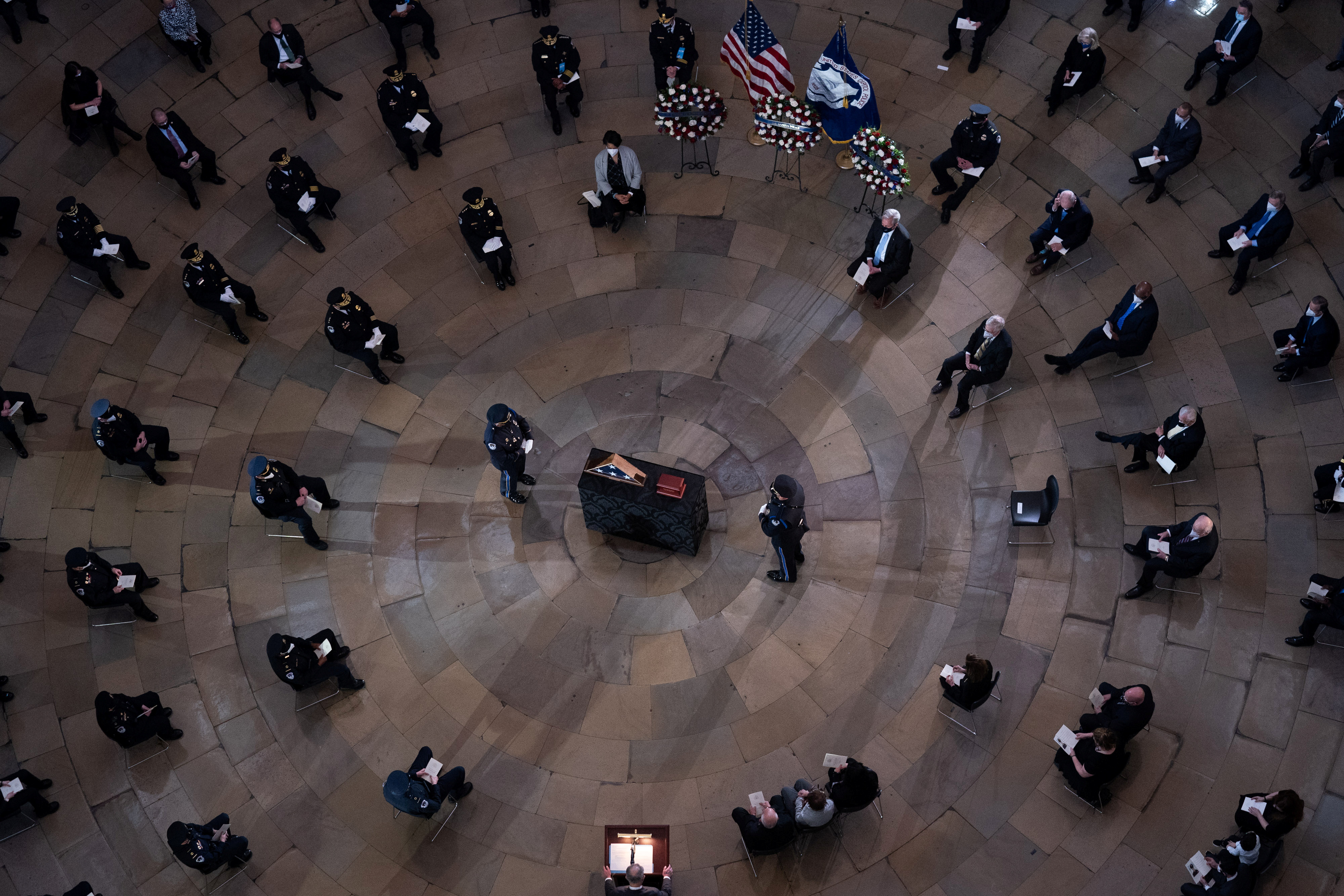 Gee, does this bother anyone out there who hates Donald Trump or who voted for Joe Biden?

If your answer is no, I’m disgusted with you. You’re beyond help, hope, or rehabilitation.

The farce of a Senate trial the nation just endured was predicated on emotion rather than law, logic, fact, language or evidence. Prime among the emotions weaponized was hatred of former President Trump (in the trial: hatred of then-President Trump was all the Democratic House needed for its evidence-free, investigation-free “snap impeachment” (credit: Prof Turley.) At the trial, House managers alluded to Capitol Police officer Brian Sicknick being “killed’ in the riot, the intended implication being that President Trump was responsible for his death. Nancy Pelosi made certain that Sicknick’s body lay in the Capitol Rotunda, one of only five civilians so honored. All the better to show the nation that the President had blood on his hands. right, Nancy? The AP wrote on February 2,

Slain U.S. Capitol Police Officer Brian Sicknick lay in honor in the building he died defending, allowing colleagues and the lawmakers he protected to pay their respects and to remember the violent attack on Congress that took his life.

That’s false on its face, but it is the mythology the public and the Senators were fed in the weeks and days following the House impeachment. Here’s CBS: “‘Hero’: Lawmakers honor officer killed in US Capitol riot.”

Yet Sicknick was NOT killed in the riot, and the news media knew that when the headline was published. From the story:

Sicknick died after defending the Capitol on Jan. 6 against the mob that stormed the building and interrupted the electoral count after then-President Donald Trump urged supporters on the National Mall to “fight like hell” to overturn his defeat. The U.S. Capitol Police said in a statement that Sicknick, who died the next day, was injured “while physically engaging with protesters,” though a final cause of death has not yet been determined.

Wait, what? That contradicts your own headline, you hacks, you liars, you blight on democracy! Never mind: the story also quotes the pious, calculated indictments of Pelosi and other Democrats, as well as Mitch McConnell:

“When members enter the Capitol, this temple of democracy, we will remember his sacrifice,” added Speaker of the House Nancy Pelosi, D-Calif.

There is, as of now and then, no evidence that his death was a “sacrifice,”

Senate Minority Leader Mitch McConnell, R-Ky., remembered Sicknick as “a hero” and praised his bravery. “In the face of lawlessness, Brian Sicknick paid the ultimate price,” he said.

No, he didn’t “pay the ultimate price.” The evidence does show that, not so far. Stating it as fact is a lie, but then, that’s Mitch.

“Though I didn’t meet him personally, I will remember him next week when this impeachment trial is under way,” Sen. Dick Durbin, D-Ill, said, saying Sicknick died “because of a political exercise based on a big lie propagated by the former president of the United States.”

Yes, that was the emotional case the House managers brought to the Senate, and it was based on fake news and deliberate misrepresentation. As of this moment, nobody knows what killed Sicknick, or if his deathwas related to his actions in the riot or the conduct of rioters.

Nearly 400 Democratic Capitol staffers signed onto a letter Wednesday calling on senators to convict Trump. They say Trump’s words are the reason “one of our co-workers who guards and greets us every day was beaten to death.”

Lie. Sicknick was not “beaten to death,” but this was the fake news narrative repeated over and over by the news media, by elected officials, by the Trump Deranged on social media. Heck, I even thought he was beaten to death. Why?

I thought that because the New York Times, the paper I hold my nose and subscribe to despite its total lack of journalism ethics and overwhelming bias because, incredibly, it’s still the best news source I can find,

On Jan. 8, two days after the deadly violence, the New York Times reported that Sicknick died after being struck in the head with a fire extinguisher. The story, which was immediately circulated throughout the media as fact, was based on the accounts of “two law enforcement officials” who have never been named. That’s what is now called “journalism.” So the Times wrote,

Clever, that Times. The story didn’t expressly say the blow killed him, or that he was beaten to death, but it left that description in the public discourse so everyone who so, so wanted to hold Trump responsible for a deadly riot—it had to be deadly—would pick up the appropriate damning narrative, and what do you know? They did. Slate featured an article with the headline: “Police Officer That Rioters Hit With Fire Extinguisher Dies, Making Capitol Siege a Murder Scene.” The New York Daily News ran a story with the headline: “Hero Capitol Police cop killed by blow to the head with a fire extinguisher during Trump-inspired riot.”

It was fake news. On February 2, CNN reported that there was as yet no evidence that the officer was beaten at all, by anything. I don’t trust CNN and unless I have to, I won’t watch or read CNN. This story is an example why. It buried the lede; it hid the real story, which was not the problems of prosecutors, but this:

In Sicknick’s case, it’s still not known publicly what caused him to collapse the night of the insurrection. Findings from a medical examiner’s review have not yet been released and authorities have not made any announcements about that ongoing process.According to one law enforcement official, medical examiners did not find signs that the officer sustained any blunt force trauma, so investigators believe that early reports that he was fatally struck by a fire extinguisher are not true.

CNN, the scum, hid that seven paragraphs into its story! If it is not known publicly what caused him to collapse, why was it publicly being said, including in the impeachment trial, that Sicknick was killed in the riot, by the riot, because of the riot?

It was being said so the public would believe it, and so Donald Trump would be convicted…based on false evidence and based on assertions the House managers either knew was untrue or had an ethical obligation to find out wasn’t true.

The Times, meanwhile, left its story unchanged…until February 12, the day the Senate trial ended in an acquittal.

The Times did not announce its change, or point to it in any way. It did not release a statement, or a mea culpa. The story was changed in a “stealth” edit, with an editor’s note:

Then the edited story reads,

Doing all it can to try to keep the legend alive, the Capitol police still has the original explanation for Sicknick’s death on its website, which is dishonest and irreponsible, but that Murial Bowser’s city for you. The relevant portion reads,

At approximately 9:30 p.m. this evening (January 7, 2021), United States Capitol Police Officer Brian D. Sicknick passed away due to injuries sustained while on-duty. Officer Sicknick was responding to the riots on Wednesday, January 6, 2021, at the U.S. Capitol and was injured while physically engaging with protesters.  He returned to his division office and collapsed.  He was taken to a local hospital where he succumbed to his injuries.  The death of Officer Sicknick will be investigated by the Metropolitan Police Department’s Homicide Branch, the USCP, and our federal partners.

So there we have it, and if you are not furious and outraged, something is seriously wrong with you. The cabal of “the resistance,” Democrats and the news media deliberately set out to convict Donald Trump in an impeachment trial using a lie, after he was impeached in great part using the same lie. In a criminal trial, a jury convicting a defendant after the prosecution falsely told the jury as fact a not only unproven assertion but one that had been falsely publicized as true would have his conviction reversed. Ah, but Donald Trump’s foes didn’t care about fairness, or dishonesty, or if or whether a n impeachment and conviction could be overturned. Details, details. They just wanted to vilify him, disgrace him, and get him, as they set out to do from the moment he was elected.

The Times, the rest of the news media, the lying Democrats, the House managers, the D.C. Government—villains, and enemies of the democracy. I am disgusted by them all, and also disgusted by anyone who isn’t disgusted.