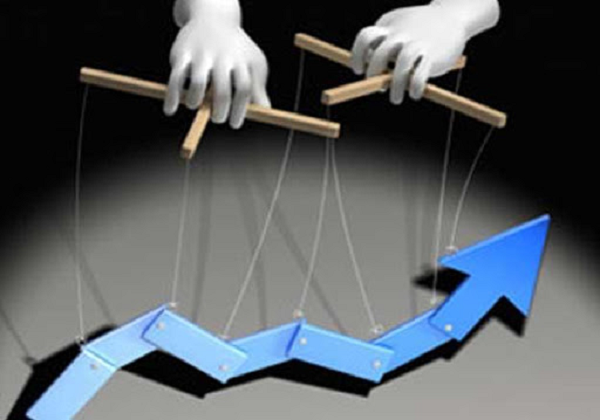 The recent House hearing on Wall Street did not actually dig into the scandals that are threatening our financial systems. The blatant manipulation of the stock market by market players has been made clear and people are just ignoring it. The same is true with precious metals trading, with JP Morgan being fined almost $1 billion for manipulating metals the same way the hedge funds manipulated GameStop above. This is after being fined $550 million in 2015 for rigging currency prices. In 2013, they were fined $410 million for price fixing energy In 2019, they were fined for manipulating the currency market. In one 3-year period, they were fined $35 billion for financial wrongdoing. Why is such a company still allowed to dominate key financial sectors? Why is it even allowed to be in business?

Is our entire system ‘rigged’? Look at the feedback loop the Fed is currently in:

A. “We don’t have inflation because inflation would cause the government to collapse under the interest of $30 trillion in debt.”
B. “We have inflation due to unrestrained printing of money, so foreign government dump Treasury bonds that pay little interest and are being devalued by inflation.”
C. Interest on the Treasury bonds increase to attract customers.
D. This can’t happen, so the Fed declares there is no inflation, prints a lot of new money to buy the bonds off the market to make the bond more valuable (because there are fewer of them).
E, This still isn’t enough and only half the bonds are purchased.
F. The fed prints more money to buy the bonds that didn’t sell to keep interest rates from increasing due to inflation from printing…

In addition to the disaster above, the ACH system (FEDWIRE) went down this week. Suspicion is that it was taken down to keep people from being able to transfer money so they could take delivery on silver, which would be disastrous given the manipulation by JP Morgan an others. When the system went down, however, GameStop stock went from $40/share to $180/share in minutes because the Fed was sending an endless stream of money to suppress the price of GameStop (and AMC and the other ‘meme’ stocks). The other suspicion was that someone at the Federal Reserve sabotaged the system to make a killing on GameStop and AMC stock.

Trading on Marathon (MRO) was suspended this week because it started to go up. This threatened hedge funds shorting it, so trading in it was suspended. I was trying to buy some more, because it was finally going up (after 3 years). It had only gone up by $0.80 or so, but trading was suspended.

Is the system rigged? Maybe you can’t prove it, but it certainly looks rigged. Maybe you can’t prove our elections are rigged, but they certainly look like it. The fact that no one investigates or does anything about it lessens the people’s confidence in the system. The scandal of GameStop is that the manipulation by Wall Street was laid bare for the 9 million members of WallStreetBets and the millions of others who read it. The fact that the manipulation was ignored and perfectly legal trading by individuals was demonized was not missed by those people. Do we have a government that can only exist behind walls guarded by thousands of specially-vetted and loyalty-tested troops because the people have lost confidence in the system? How much longer can this go on?

8 thoughts on “Our Financial System And Trust”