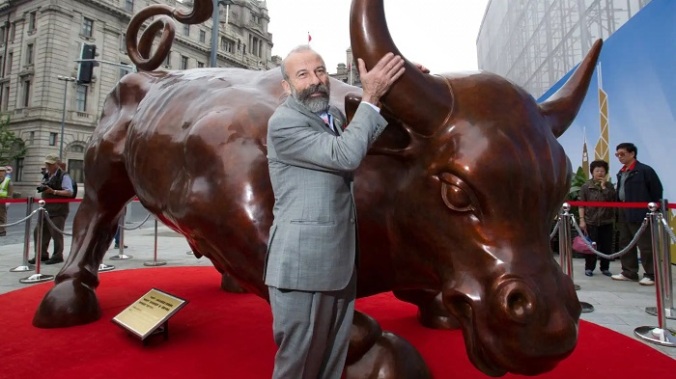 Talented and bold artist? Shameless self-promoter? Hypocrite? Unethical jerk? Arturo Di Modica, the Sicilian-born sculptor who died earlier this year was all of these. He was also a one-man ethics train wreck.

In mid-December of 1989, the artist illegally dropped his “Charging Bull,” a 3.5 ton bronze sculpture (that’s a similar model he had mounted in China above), in Lower Manhattan one night in 1989. He claimed it was a gift to his adopted country, the United States, urging courage and defiance after its 1988 financial collapse. Maybe. Or he just wanted to grandstand and get publicity. Either way, you cannot put a giant statue in a public place without permission, permits, owning the property involved, little things like that.

This was a planned crime. Di Modica spent weeks prowling the Wall Street area after midnight, noting when and where police officers walked by. He had about forty accomplices waiting at around 1 a.m. when he loaded his sculpture onto a flatbed truck and drove to Broad Street, next to the Stock Exchange. But it was nearing Christmas, and the Stock Exchange had put up a huge Christmas tree where he had planned to drop “Charging Bull.”

So he put it under the tree.

Officials had to have the sculpture hauled off that afternoon; it was sent to a police warehouse in Queens. Someone is always around to make law-breaking showboaters get what the want, and sure enough, Di Modica received an offer to move the sculpture to a park at below Broadway. After the sculptor paid a $500 fine, the charging bovine was moved to a traffic island in the Financial District, where it has stood ever since. His “gift,” after all the publicity it received, served him well: the artist sold it to a British investor, on the condition that he never move it from its Bowling Green location, for what is believed to be millions. Not bad for his investment of approximately $400,000, including that fine. How often do you make money on “gifts” to others?

He could break the laws that inconvenienced him, but Di Modica was quick to use the law against others. In 2006, he sued Walmart and several other companies for using images of “Charging Bull” on their products. Then, in 2017, rival artist Kristen Visbal gave Di Modica’ a taste of his own medicine by illicitly deposited her own bronze statue opposite the brass bull— a bronze girl in ponytails with her fists on her hips. Di Modica did not appreciate the irony, and his lawyers sued, claiming Visbal had changed the meaning of his work, which, in fact she had. This, in turn, sparked public support for Visbal, using many rationalizations.

I wrote about this controversy here.

In 2018, “Fearless Girl” was moved to the front of the New York Stock Exchange, not far from the spot where Di Modica had left “Charging Bull” on that night in 1989. The net effect of Di Modca’s deliberately illegal conduct was undeniably cultural enrichment in the NYC Financial district, fun for tourists, and fees for lawyers. But the ends do not justify the means, and any episodes that deceive the public into thinking otherwise are ultimately destructive.

And that is why Arturo Di Modica, bold and talented sculptor that he was, has to be regarded, in the final analysis, as an unethical jerk.