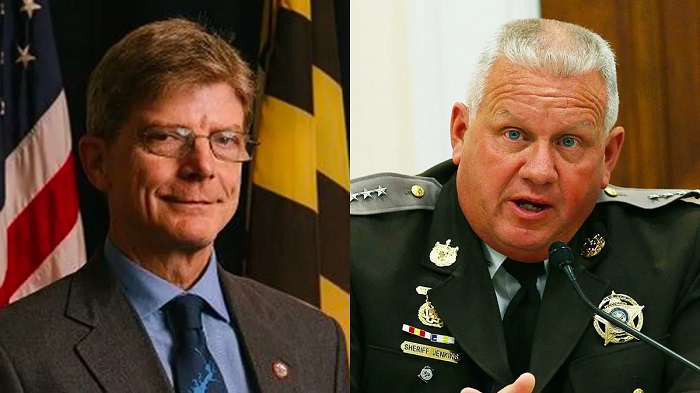 What would be more accurate term? Well, “asshole” comes to mind.

A Frederick County deputy pulled over a vehicle for a tag violation on June 20 when he noticed another vehicle pull up nearby. The deputy reportedly first feared for his life, and that it could be a cop assassination set-up. But the driver of the second vehicle introduced himself as Democratic county councilman Kai Hagen, and he refused to leave the scene until the detained driver, an African-American, acknowledged that he was “OK.” County Sheriff Chuck Jenkins, a Republican, went on WFMD-AM’s “Mid-Maryland Live” last week to condemn the grandstanding Councilman.

“I’m enraged, I’m angry, I was livid when it happened, there’s no excuse for it, it’s unlawful,” Jenkins said. “This is outrageous. Who in the hell does he think he is?” Jenkins added, while noting that Hagen could legitimately have been cited for his actions.

Not could have been, should have. The deputy handled the matter badly, falling for the old “Do you know who I am?” trick. It doesn’t matter who the interloper was. He was interfering with lawful law enforcement.

Hagen then called in to the radio station to explain his conduct, confirming that he had turned his vehicle around and circled back to the scene to ensure that the stopped driver was all right when he noticed his skin color—you know, that he wasn’t being beat up, shot, having drugs planted on him, being made to sing “The Camptown Races” or having his neck knelt on, which we all know is what white cops want to do to blacks.

“So you’re telling me that the reason you came back is because the driver of the vehicle is African American or black?” the furious sheriff asked

“That was a consideration,” Hagen responded. More points for “asshole”: do you think Hagen does this for every traffic stop he sees, or just when he can burnish his credentials as an anti-cop, pro-Black Lives matter shill?

Then he shifted the topic away from his own indefensible conduct, as such shills are wont to do. “You don’t believe that there’s any such thing as systemic racism in — not only Frederick County but law enforcement in the United States?” Hagen shot back at Jenkins, who had just pronounced Hagan’s claim that he had legitimate reason to fear for the black motorist as “bullshit.”

“That’s correct. I do not,” Jenkins replied. “If there’s a racist on the line, it’s you, my friend.”

And indeed it is. Not racist, exactly, since Hagan is white, but he is a bigot, and and advocate of racism by others. The presumption of racism on the part of anyone is a major ethics breach, gouging fairness, respect, civic responsibility, and the Golden Rule. It has also become a primary theme of the ironic “antiracism” scam, in which racism is cynically employed to “end” racism.

Hagen aspires to be county executive, and obviously thinks his transparent posturing will win him votes by the Black Lives Matter enablers of his state, who are doubtlessly like the woman across the street from my house who has inflicted a 6×5 foot hand painted “Black Lives Matter” sign on the neighborhood for half a year. (Spuds peed on it last week, I’m proud to say.) The police in the County should announce that they will resign en masse should he be elected, absent a sincere apology for his interference with lawful police work.

An ethical Democratic party and an ethical public in Frederick County would demand Hagen’s resignation for his criminal act as well as the abuse of power and position it represents. Apparent Frederick County has neither.