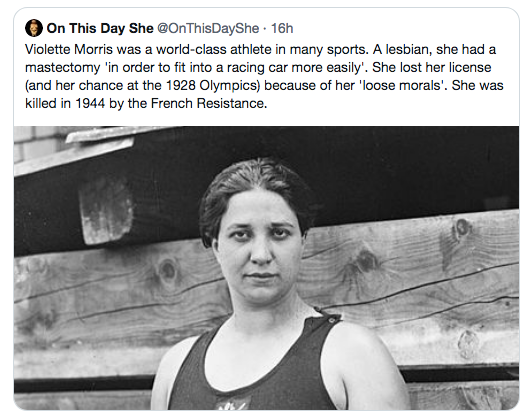 “On This Day She” is a book published this year dedicated to “the women whom [sic] time has forgotten; those who didn’t make it into the history books and those whom [sic] society failed to uphold as significant figures in their own right.” There is also a website following through on the premise of the book (and promoting it), from whence the misleading tweet above emanated. Though the book does admit to including women who engaged in “the bad” and who it deems unjustly ignored by history, the tweet above undercuts that admission. The hint is in the last sentence. Why was Morris killed by the French Resistance in 1944?

She was a Nazi, that’s why, and a traitor as well. Morris, a French citizen, sourced black-market petrol for the Nazis, ran a garage for the Luftwaffe, and drove for the Nazi and Vichy hierarchy. After Germany took over France, she worked to foil the operations of the Special Operations Executive, an English organization that aided the Resistance. Claims that she also engaged in spying activities and Nazi torture are disputed, but never mind: what she did do was sufficient to have her known as “The Hyena of the Gestapo” and sentenced to death in absentia. She was ultimately shot and killed—assassinated, to be technical— when her car was ambushed by the Resistance.

Based on the apparently true story that she had her breasts lopped off so she could drive racing cars, Morris was also a wacko. Surely there are women whose contributions to society justify their stories being told who are more deserving than she is. Indeed, only a tiny percentage of history’s women are less deserving, except as curiosities. We’re tearing down statues of Thomas Jefferson, but working to revive the memory of Violette Morris? The Great Stupid is full of surprises.

Or is the theory that because she was persecuted for her sexual orientation and lifestyle, her victim status mitigates her alliance with Nazi Germany? If so, it’s a stunningly foolish theory that shows warped values and priorities.

Feminists can do better than to lionize creeps like Violette Morris. They have to do better.