“I think what I said in the tweet is the regulation permits students to rape and sexually harass with impunity. I think that the regulation has weakened the intent of the Title IX that Congress wrote.”

That was Biden  nominee Catherine Lhamon in her confirmation hearing this week, answering a question about whether she would enforce the DeVos  Education Department regulation requiring due process and the presumption of innocence in campus evaluations of sexual misconduct complains by female students. Remember this quote the next time you read one of those claims that Republicans or conservatives are existential threats to democracy and civil rights. What Lhamon is literally saying is that due process is a bad thing, because it allows those accused of crimes or misconduct to escape punishment when allegations against them can’t be proven beyond a reasonable doubt. That’s what she means. And what she said means that she, those who think like her on the progressive side of the spectrum, and anyone who would give her power are existential threats to democracy and civil rights. 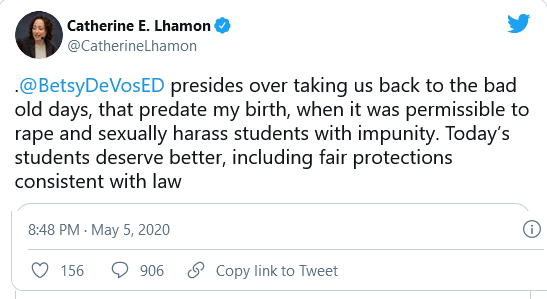 claiming that the Trump-era Title IX regulations allow students to “rape and sexually harass students with impunity.” It is much better, she believes, if accusers are accorded automatic superior credibility in the adjudication process, meaning that the American principle of justice should be turned upside down when “all” that is at stake is a young man’s education and reputation. He should have to prove himself innocent. Female accusers should be believed. In a “she said-he said” controversy, “she said” wins.

President Biden wants Catherine Lhamon to head the Education Department’s Office for Civil Rights (OCR), the same agency she led during the Obama administration.  Then she distorted Title IX, a 1972 law banning sex discrimination in federally-funded educational institutions, to broadly redefine sexual harassment while eliminating  procedural rights for accused students. Using an extortionate “Dear Colleague” letter, she pressured schools to beef up their Title IX bureaucracies and adopt a “single investigator” model in which one person appointed by the school’s Title IX office collected evidence and determined guilt or innocence without a hearing or cross-examination of witnesses, and a constrained right to appeal. Even the usually supine and Left-enabling ACLU opposed these policies, because they are totalitarian in substance and spirit.

The issue isn’t whether this radical, anti-male, anti-due process, “ends justify the means” opponent of basic principles of justice should be rejected by the Senate; of course she should. The issue is how to make the apathetic and legally ignorant American public recognize what her nomination signifies: a willingness, indeed eagerness, to abandon Constitutional safeguards in pursuit of progressive objectives.