1. Let’s begin with an update, Great Stupid Division...Remember this idiotic story? You probably don’t; at the time, I thought it was almost too silly to write about: a 70 ton boulder that students at the University of Wisconsin were protesting as racist because of what it was once called. I wrote in part,

“Over 10,000 years ago, pre-Cambrian bedrock drift from Canada left it on what would become the campus of the University of Wisconsin in Madison…The rock was extracted from  the side of a hill in 1925, when Calvin Coolidge was President, and my father was five-years old, and placed in its current spot. It was dubbed “Chamberlin Rock” after Thomas Chrowder Chamberlin, a 19th century glaciologist and University of Wisconsin president, given its  plaque memorializing him and placed at the university’s Washburn Observatory. Suddenly, after 95 years,  the rock has become racist, and black students are demanding that it be removed. You see, long ago, the term “niggerhead” was commonly used to describe large dark rocks….Isn’t it also obvious that this is, like so many of the demands during the George Floyd Freakout, just a contrived power play, as in “Watch this! We’ll make Whitey move a 70 ton rock just because we ordered them to do it!” Why can’t University officials end the “controversy” by saying, “No, children, we are not going to move a 70 ton rock because you have made the calculated decision that it hurts your boo-boo. You’re here to grow up: start doing it.”? If society won’t  reject demands this stupid,  why would any demand seem unreasonable?…”

That last question is still in play: The university, being run by weenies and fools, removed the rock last week, at a cost of more than $35,000, probably closer to twice that amount.

2. Here is a correction from CNN that tells us much about a lot of people and things, but especially CNN:

“After CNN aired a story about her potential eviction, Dasha Kelly clarified to CNN that she is not the mother of the three children featured in the story. CNN has verified she takes care of the children in her home for periods of time. She says she originally described herself to CNN as a mother because she considers herself to be like one to them. CNN has learned the children are also cared for by their mother, Shadia Hilo, and their father, David Allison, who is Kelly’s boyfriend. GoFundMe tells CNN they are in close contact with Kelly and funds will stay on hold until they verify her information. GoFundMe says no funds have been withdrawn.”

…until after a GoFundMe page set up to help this poor, overwhelmed mother raised over $230,000. It did so in response to the scam CNN aided and abetted by being so eager to make an emotion-based case for the illegal eviction moratorium that it didn’t check before letting this women pull off her lucrative hoax.

I especially like the “she considers herself to be like a mother to them” argument. In fact, it wasn’t even Kelly who exposed the scam, it was the kids’ real mother. CNN couldn’t even make its correction correctly. Before all this, the shameless news network even brought the fake mother back on live TV, with the children that weren’t really hers, for a follow-up interview. That one included Democratic Congresswoman Cori Bush, who has championed the scam being dishonest herself as well as dumb as a box of racist rocks:

I’m sorry to begin the day by reminding you of the quality of the people making our laws and the level of trustworthiness of the news media, but as Walter Cronkite used to say, “That’s the way it is.”

3. If the Marlins mascot were a boulder, they would have removed him…Someone thought a fan at a Marlins-Rockies game at Denver’s Coors Field yelled a racial slur at Florida Marlins player Lewis Brinson. The fan was heard shouting during the ninth inning of the Rockies 13-8 win, and a University of Wisconsin student heard him, or someone like such students who enjoy imagining racism under every rock. So the fan was confronted, embarrassed, and his words investigated by the Rockies Stasi, and…Never mind! He was just shouting at the team’s dinosaur mascot… 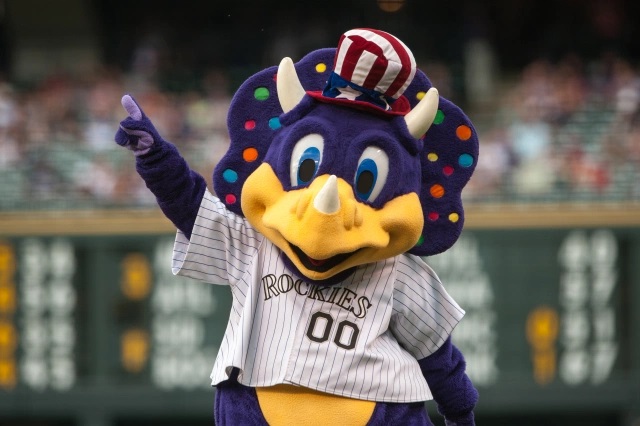 Sure, “Dinger” sounds like “nigger” if you really want to believe that racism is everywhere. Maybe “Dinger” sounds too much like “nigger”. Yeah, I think if someone called out the Triceratops’ name and a fan of color or a black player was momentarily offended and felt “unsafe,” that is sufficient reason to regard the name as racially insensitive. The Rockies need to change the name, maybe to “Guardian.”

Come to think of it, Dinger himself–itself?–has been called something—you know, his name—that someone “of color” experienced as racist, so, really, if the Colorado Rockies want to be antiracist, they really need a new mascot. In fact, the team needs a new , non-racist name, since one of those sensitive U. of W. students might think “Rockies” refers to that 70 ton racist rock.

4. Back to sexual harassment for a second: My wife and I were watching the 1995 film “Outbreak” again, and I noticed that all of the good guy leads in the movie, Dustin Hoffman, Kevin Spacey, and Cuba Gooding, Jr. have had their careers ended by sexual harassment scandals. An actor playing the one of movie’s villains, Morgan Freeman, also was driven into quasi-retirement after multiple sexual harassment accusations. Yet Andrew Cuomo apparently missed it all…them, Harvey Weinstein, Brad Bird, Charlie Rose, Al Franken, Matt Lauer, Roger Aisles, Bill O’Reilly, Garrison Keillor, Casey Affleck, Tony Robbins, Bryan Singer, Joss Wheden, Les Moonves, Blake Farenthold, Tom Brokaw…well, the list goes on and on like a Proust novel. Nobody told the Governor about any of them, he didn’t read about them, this new fangled sexual harassment thing just came at him out of the blue!

5. Trump Derangement is still profitable. Michael Wolff, a pseudo journalist, meaning that he’s even less ethical than regular journalists, has already had two best-selling anti-Trump books based on anonymous interviews with people who hated the former President, and despite the fact that he has openly admitted that his books include rumors, hearsay, exaggerations and likely payback, he now has a new one out, “Landslide.”

Usually such dubious and biased jink would be ignored by reputable reviewers, but the Left is terrified that Trump may rise like Dracula, so anything negative is not only welcome but by definition, good. In the New York Times Book Review’s article about “Landslide,” Nicholas Lemann writes that Wolff “uses lots of detailed off-the-record interviews with aides to produce a tale told in a third-person omniscient voice, without conventional journalistic attribution.” That means it’s untrustworthy gossip—fake news— and perhaps nothing but. Lemann was the dean of the Columbia School of Journalism: why doesn’t he say that? Well, because he believes, being firmly in the “resistance”/Democrat/ mainstream media bubble, in Wolff’s thesis that Trump is a “malign and dangerous ‘crazy person.’” Thus the book, propaganda that it is, fits the needs of his confirmation bias. Presumably there are enough people like Lemann to make “Landslide” a success.

Similarly Mary Trump, the President’s niece, was able to get her book published in which she essentially says nasty things about her uncle based on almost no contact with him at all. She is neither objective nor trained in political analysis, but just anti-Trump animus is enough. Doing her own review of the concept of someone like Mary writing such a book, Ann Althouse writes in part,

“What is the value of Mary Trump’s writing? …she didn’t have access to him. She was just watching him on television like the rest of us, right? Purporting to know the workings of his mind makes her less credible than those of us who would add phrases like “I think” to assertions like “he was afraid” or who would change that “was” to “looked.”…I could write a book about Mary’s book, in which I use Mary’s approach to observational expertise against her. I would go through the book paragraph by paragraph and find every turn of phrase that I can characterize as evidence of the traits that she finds in Donald Trump and I would repetitively bolster my points by reminding the reader that Mary and Donald belong to the same family, so we can presume these are family traits. Whatever she says about him I can observe in her, and the only evidence I will need is her own book.”