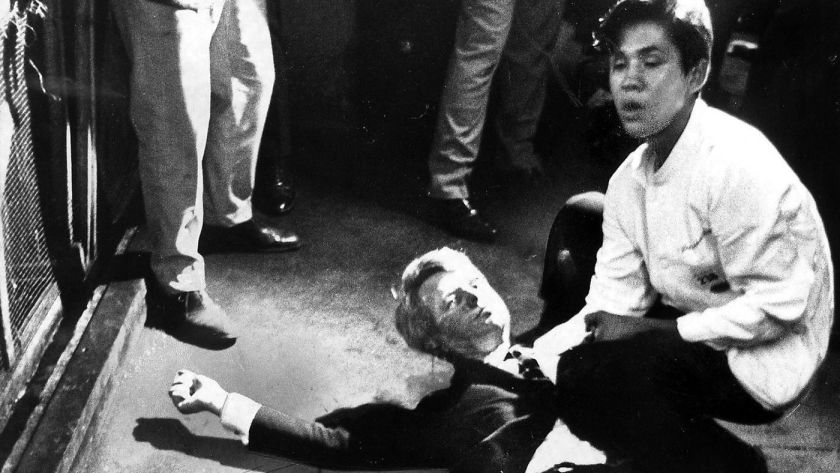 Newly elected Los Angeles County District Attorney George Gascón issued a directive that his office’s “default policy” would be not to attend parole hearings and to submit letters supporting the release of some inmates who had served their mandatory minimums. Now Sirhan B. Sirhan, the convicted assassin of Sen. Robert F. Kennedy, will be a beneficiary of the policy as he faces a California parole board for the 16th time tomorrow. in a prison outside San Diego. Unlike the first 15 times, no prosecutor will oppose his release.

Sirhan is now 77. He escaped execution when California, being California, abolished the death penalty and his sentence was reduced to life with the possibility of parole. Instead of death, then, his punishment for murdering a possibly transformational U.S. political leader might be only 53 years behind bars. It could have been fewer: under the California law in effect when the assassin struck in 1968, a life sentence with parole would have made Sirhan eligible for release after only seven years. Now the parole board will evaluate him as an inmate who has had no disciplinary violations since 1972, and has expressed remorse, sort of: at one, “I have feelings of shame and inward guilt … I honestly feel the pain that [the Kennedys] may have gone through.” On the other hand, he has never expressly admitted his guilt and now claims not to remember shooting Bobby.

Funny, you’d think he would recall something like that.

Sirhan’s lawyer Angela Berry, argues that parole is appropriate because of the factors noted above, Sirhan’s age at the time of his crime (24), and the fact that he is no longer a threat to society. Denying parole on an opinion that Mr. Sirhan’s actions ‘changed the course of history’ or ‘disenfranchised millions of Americans’ violates due process,” she says. She cites the California Supreme Court’s guidance on parole consideration, holding that an analysis “cannot be undertaken simply by examining the circumstances of the crime in isolation, without consideration of the passage of time or the attendant changes in the inmate’s psychological or mental attitude.”

To be clear: there really is a chance that the man who assassinated Bobby Kennedy right after he had won a crucial Presidential primary that could have put him on a path to get the Democratic Party’s nomination to run against Richard Nixon will be released.

Legally, this can be justified. Ethically, it is outrageous. Political assassination is one of those extreme varieties of murder, like mass murder, serial murder, child murder and murder with torture, that has to occupy the top tier of punishment if human life is going to given appropriate weight in our society. The top tier of punishment is the death penalty. Sirhan Sirhan should have received it,but at very least, his crime mandates never being allowed into civil society again. Letting him go free now after only 53 years in prison—yes, only—creates a dangerous precedent and a perilous slippery slope. 53 years and out for murdering the father of nine children, a political leaders and public servant, and a man on a course to alter U.S. society with the support of millions of Americans? If that’s “justice,” how much time should the killer of drug dealer in a transaction gone sour get? An hour and 45 minutes?

[Disclaimer: In the interests of full disclosure, I have to state that I believed in 1968 as I do now that Bobby was, like his two brothers and his father, a cynical, manipulative sociopath, and unfit for public office.]

5 thoughts on “Tales Of The Slippery Slope: Paroling Sirhan Sirhan”