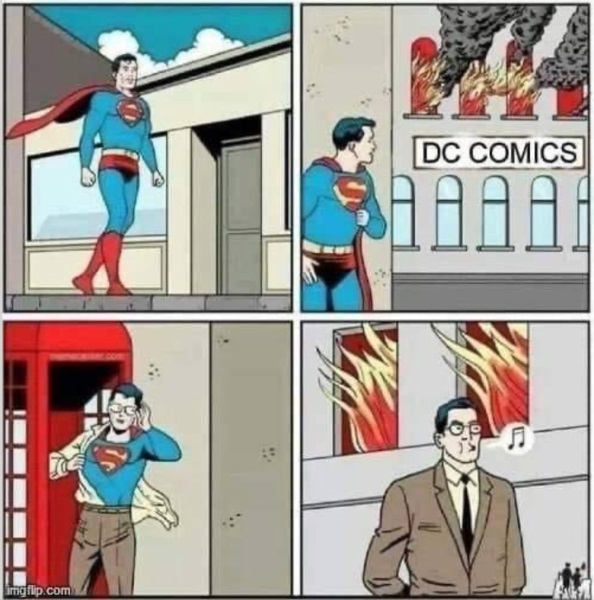 I know, I know…enough Superman already. What is this, “Seinfeld”? I was fully intending to have a Superman-free zone this weekend, but Steve-O-in NJ’s deft and historically illuminating comment on the second of the four honored comments on the last ethics quiz could not be ignored.

I think it shouldn’t be lost on folks here that Superman first appeared in Action Comics No. 1 in 1938. He came to be during the Depression, when this country was at its lowest and believing in itself the least. He was the creation of two aspiring Jewish writers named Jerry Siegel and Joe Shuster, who first conceived of him as a mind-reading, super-strong, and bald (!) villain given his powers by an experimental drug in a 1932 story called “Reign of the Supermen.” It wasn’t until 1935 that Superman became a hero and acquired his now well-known background, cape, and uniform. They had really wanted to get published in the comics pages as a strip, but when they kept getting turned down, eventually they signed away the rights to Jack Liebowitz, who had just formed Detective Comics, which would later become simply “DC” (although Detective Comics would continue to be published as a title and a year later Batman would debut there, but that’s another story). At least they’d finally see Superman published.

The rest, as they say, is history. However, Superman has, at least to some degree, always been an idealized “man of his times.” In the first few issues he was actually a bit of a smart aleck, and at one point anti-industrialist. Among other things, at one point he but two munitions manufacturers out of business, blaming them for war (THAT vanished with the coming of WW2). A real shocker was early on when he confronted a woman who had murdered someone. She drew a gun on him, whereupon he crushed the barrel out of shape, grabbed her hand, and asked her if she would surrender, “or shall I give you a taste of how that gun felt when I applied the pressure?” She of course surrendered, ruefully admitting that she would get the chair for the murder. Superman pitilessly replied, “you should have thought of that before you took a human life.” Obviously this would not fly now. It gets better when the character takes to radio in 1940, with a slightly modified origin story where he ages on the journey to Earth from Krypton and steps fully formed from the spacecraft, including being able to speak English. At one point he goes to confront a villain at his home, but finds only his Filipino houseboy, who of course speaks with a very exaggerated accent. He proceeds to intimidate him physically, and warn him, including a mild ethnic slur, that if he’s lied to him he’ll come back and kill him.

Obviously a lot of this faded away with WW2 and Superman became the selfless humanitarian and patriot hero/unpopular klutz ordinary person we mostly know him as. He continued in this vein throughout the next, oh probably four decades, battling supervillains and criminals, saving ordinary folks from disasters, appearing in animated shorts (some of which, like “Japoteurs ” and “Jungle Drums” feature major ethnic stereotyping) and linking up with other heroes to, at least for a time, form the Justice Society of America (although he didn’t appear as much with them as he would with the Justice League later, not that it mattered as much, since at least two of its members, wizard hero Dr. Fate and the semi-divine Spectre, were significantly more powerful). As the Golden Age of comics ended, the “candy stores” that stocked the magazines ceased to be a fixture of every neighborhood, and television became the dominant form of entertainment, superheroes generally faded into the background, except him, Wonder Woman, and Batman. He did make it onto TV, but the character wasn’t that well-developed, and sometimes had odd powers he had nowhere else, like the power to pass through walls and the ability to split into two supermen.

Of course he continued on after the “return of the long-underwear brigade” in the 1960s started to revive the superhero genre and began the Silver Age. He doesn’t really start to change until the 1980s, when the first reboot (not sure if that was before or after the major reset of Crisis on infinite Earths), which discards the idea of Clark Kent as a klutz/wallflower and remakes him as someone who played football for Smallville High and works out on the Nautilus machine in his apartment. Still, he remained very much an American hero, even through Crisis, even through the dissolution and reformation of the Justice League (following an ill-advised attempt to make it more like the better selling Teen Titans), even through a brief split into red and blue Supermen. The franchise started to tone down the American Way stuff with the reboot of the movie franchise in 2006, when the surge of patriotism that followed 9/11 had begun to fade, but never eliminated it altogether. DC and Warner Communications (the parent company) first started getting into the social justice angle of things when they started introducing gay heroes in about 2012 with the reboot of the Alan Scott Green Lantern as a gay man (long story), possibly as an answer to Marvel’s longer-standing gay hero Northstar. However, they left the major moneymakers alone.

DC Comics and parent company Warner Communications have always been businesses before anything else. Here’s the thing though, comic companies in and of themselves are nowhere near as profitable as they once were. They haven’t been for 25 years, which is when Marvel and DC started to have to rely more and more on television and later movies to remain viable. That’s a whole different arena to operate in, and, like it or not, more subject to cultural changes and the whims of the few at the top, who, as we well know, are pretty much universally liberal and activist about it. They never miss a chance to shove progressive values in the audience’s face. Like Disney, they have gone from reflecting the values of their customers to imposing their values on their customers. They’re banking on fans just shrugging as long as they get their battles and special effects. The only American way now is the kind that puts bodies in seats and money in pockets.

The one danger here, though, is that the current uber-progressive zeitgeist may well be just a flash in the pan. As the economy stagnates and progressives make mistake after mistake and disaster after disaster, there suddenly might be a rebirth of patriotism in the DC universe – nothing fails to sell like failure.

Source (for the graphic): Powerline