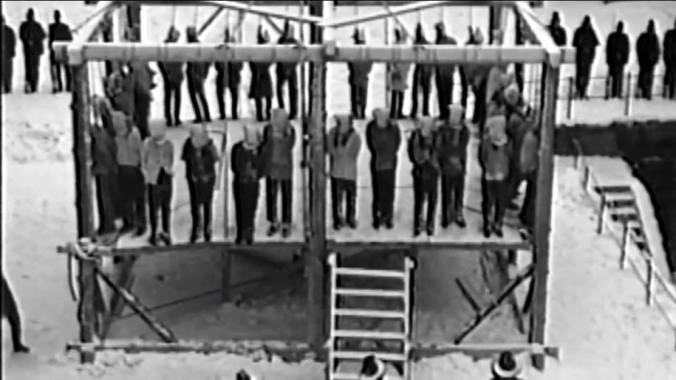 In Minnesota on November 5, 1862, more than 300 Santee Sioux were sentenced to hang for their part in an uprising that was justified by outrageous mistreatment by the U.S. government. A month later, President Abraham Lincoln commuted all but 39 of the death sentences and granted a last-minute reprieve to one more, but the other 38 were hanged on December 26 in the largest mass execution in our history. This, of course, makes Abe a racist and a purveyor of genocide, so that memorial in Washington just will have to be blown up, that’s all. Fanaticism doesn’t do nuance, or even utilitarianism. But as Ethics Alarms explained here, Lincoln had a civil war to win in order to re-unite the nation and end slavery. The Sioux were collateral damage in a very difficult trade-off but an unavoidable one.

1. In coincidental ethics news relevant to the above...An Oct. 27 New York Times story , perhaps motivated by the fact that Kamala Harris got her law degree from the school, revealed Serranus Clinton Hastings role in Native American massacres during the late 19th Century. Somehow, either the University of California’s Hastings College of the Law in San Francisco’s administrators and donors weren’t aware of their institution’s founder’s sordid history, or chose to ignore it. Now they want California lawmakers to change the school’s name. A press release explained that the Hastings name “is written into state law” and a name change requires legislation, the press release said.

This is called “restorative justice.” But the school also owes its existence to Hastings, who donated $100,000 to start the law school in 1878. Hastings was a politician, lawyer, landowner and California’s first chief justice. What Hastings donated is worth between $2,836,711.48 and $39,924,610.20 today, depending on what standard you use, but whatever it’s worth, Hastings gave a lot of his money to establish the law school. Where’s his justice? The University and its law school graduates have benefited from his generosity greatly, indeed existentially, but the reasoning is that his misdeeds unrelated to the school justify its taking his money and explicitly dishonoring him. This is exactly the logic being used to justify airbrushing Thomas Jefferson out of our history.

2. More on the unacceptable failure of pollsters: In a column for NJ.com, pollster Patrick Murray says that he “blew it” and expresses his own doubts about whether election polls now do more damage than good.

“The final Monmouth University Poll margin did not provide an accurate picture of the state of the [New Jersey]governor’s race,” he writes. “So, if you are a Republican who believes the polls cost Ciattarelli an upset victory or a Democrat who feels we lulled your base into complacency, feel free to vent….I owe an apology to Jack Ciattarelli’s campaign — and to Phil Murphy’s campaign for that matter — because inaccurate public polling can have an impact on fundraising and voter mobilization efforts. But most of all I owe an apology to the voters of New Jersey for information that was at the very least misleading.”

In related news, Ciatarelli is refusing to concede, though the election has been called for incumbent Murphy.

Murray concludes that it might be time to quit polling. “Some organizations have decided to opt out of election polling altogether, including the venerable Gallup Poll and the highly regarded Pew Research Center… Other pollsters went AWOL this year. For instance, Quinnipiac has been a fixture during New Jersey and Virginia campaigns for decades but issued no polls in either state this year,” he says. “Perhaps that is a wise move. If we cannot be certain that these polling misses are anomalies then we have a responsibility to consider whether releasing horse race numbers in close proximity to an election is making a positive or negative contribution to the political discourse.”

3. How can universities justify having racists and race-hsutlers like Dyson on their faculties? Michael Eric Dyson (His Ethics Alarms rap sheet is here) is a Vanderbilt University Distinguished Professor of African American and Diaspora Studies in the College of Arts and Science, and University Distinguished Professor of Ethics and Society in the Divinity School. Before that he was a professor at Georgetown for 13 years. Naturally, because he’s also an anti-white racist, Dyson is a contributor on MSNBC, and a favorite of the horrible Joy Reid, who was in top form this week.

Here is what Dyson said about the election of Republican Winsome Sears who, became the first woman and first Black candidate elected to statewide office in Virginia…you see, it still meant Virginians are racists:

“They want credit for having hair in the morning or getting up and brushing their teeth. ‘Look, I’ve made an achievement that should be noteworthy.’ No. You are doing what all political figures what must do: make choices. The problem is here they want — they want White supremacy by ventriloquist effect. There is a Black mouth moving but a White idea through the — running on the runway of the tongue of a figure who justifies and legitimates the White supremacist practices. We know that we can internalize in our own minds, in our own subconscious, in our own bodies the very principles that are undoing us. So to have a Black face speaking in behalf of a White supremacist legacy is nothing new. And it is to the chagrin of those of us who study race that the White folk on the other side and the right wingers the other side don’t understand….If you tell Black people, ‘Look, I support a Negro. Look! There is a person of color that I am in favor of,’ and that person of color happens to undermine and undercut and subvert the very principles about which we are concerned, you do yourself no service by pointing to them as an example of your racial progressivism.”

Short version: “If you don’t vote for Democrats, you’re a racist.”

4. Maybe it’s because you can’t fool enough of the people enough of the time? Over at the New York Times, in mourning because of the thrashing its party took on Tuesday, Reid Epstein is troubled that a large turn-out doesn’t automatically mean more votes for Democrats. ‘Hey, Republicans!‘, he says. ‘Maybe you shouldn’t keep trying to make it harder for people to vote!’ On the way to this weird use of the election results to smear the GOP, Epstein continues several mainstream media/ Democratic deceptions, like stating that the 2016 Trump victory “turbocharg[ed] a more explicit Republican argument that making voting harder would make it easier for the G.O.P. to win elections.” The actual argument is that making it harder for Democrats (or anyone else) to cheat is better for democacy, which it is.

Then he writes, “Republicans spent the next year, in states they control, fighting to make it harder to vote and promoting lies that the 2020 turnout had been stocked with fraudulent Democratic votes.”

There is no reason to take the analysis of anyone seriously who asserts that the easier it is to vote, the better. That’s an argument for the dim-witted: voting is important, it needs to have integrity and be trusted, and voters need to be committed and take their responsibility seriously. We could make voting “easier” by not requiring voters to register. We could make it “easier” by letting voters vote by email, or on line, or just calling an 800 number and saying who they are (or claim to be) and who they want to vote for. It could all be done via phone tree! “Press #1 for candidate X, #2 for Y….” Eventually Democrats will propose all of these and more, and those opposing them will be tarred as racists.

Moreover, the statement that claims of significant numbers of fraudulent votes are “lies” is itself a lie. If a system is inherently insecure and allows fraudulent votes—and mail-in voting does—then it is inherently insecure, and if a system permits cheating, there is a rebuttable presumption that cheating occurred. The burden of proof is on enablers like Epstein to show that cheating didn’t occur. They haven’t. One cannot state as a fact that the 2020 election was stolen, but as long as there are mail-in ballots, stealing elections, or at least significant numbers of votes, will be a dark shadow over the process.

As an aside, the op-ed also says that Virginia eliminated voter ID. That’s odd: I was asked to present identification on Tuesday.

5. Notes from the Great Stupid: I hate to blow up your head this early in the morning, but you have to watch the beginning of this Microsoft video:

20 thoughts on “Morning Ethics Warm-Up, 11/5/2021: When The Woke Try To Cancel Lincoln—And They Will—This Day Will Be Part Of The Reason”