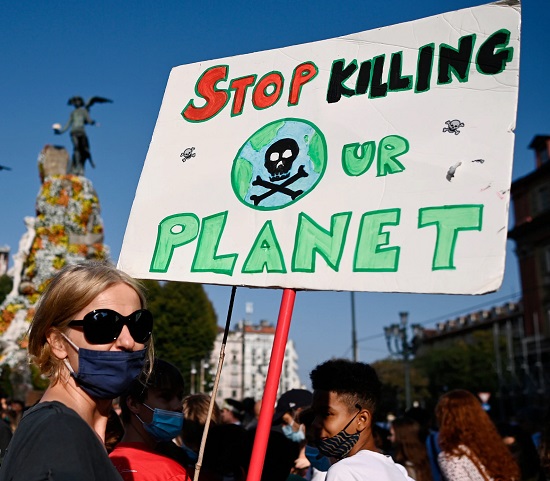 As the United Nations COP26 climate summit among of world leaders proceeded, China continued to pledge coal-reducing actions that it has no apparent intention of actually doing, Joe Biden’s Energy Secretary laughed at the idea that the administration would even try to lower gas prices, and both the mainstream media and Big Tech moved closer to censoring anyone who dared to question climate change chic. Climate change hustlers and doomsayers were, as usual, predicting disaster. We are “quite literally” in the “last chance saloon,” said Prince Charles, though why anyone would pay attention to him is a fascinating question. Even Justin Welby, the Archbishop of Canterbury, condemned leaders for not addressing climate change by accusing them of “a genocide on an infinitely greater scale.” Greta Thunberg accused politicians of not taking “our future seriously.”

Here, climate wackos confronted Sen. Joe Manchin as he stepped off his yacht with cries of “We want to live!” because Manchin has blocked pointless and expensive anti-climate change measures in the trillion dollar infrastructure bill. “Business as usual” will lead to a catastrophic collapse of Himalayan glaciers; and devastating heatwaves in the southern United States, sayeth the New York Times.

Facts Don’t Matter in the Age of The Great Stupid. I’m betting neither the idiots who harassed Manchin, nor “Green New Deal” guru Rep. Ocasio-Cortez, Al Gore, Greta Thunberg or Nancy Pelosi know that the extreme and apocalyptic predictions they are relying on is the IPCC’s RCP 8.5 scenario often described as “business as usual.” “Business as usual” in that scenario literally means no action by any nations whatsoever, so it is already useless—except to cause alarm and panic among those foolish enough to trust the hysterics.

RCP 8.5 was unlikely when it was proposed, and has become more unlikely since. So why are the news media and policy-makers still using it to scream that the sky is falling? It is because their business as usual is acting without sufficient understanding of what they are doing, and unethically misinforming the public.

In 2007, climate scientists wanted to create new emissions scenarios, imagining how conditions might change in the coming decades and what impact they would have on the climate. Four “representative concentration pathways” or RCPs—if nothing else, climate science has lots of jargon—were developed: RCP 2.6, 4.5, 6.0 and 8.5. They were, respectively, an optimistic scenario regarding emissions, two moderate scenarios, and a pessimistic one, RCP 8.5. Even when it was devised, this scenario was considered as extreme and unlikely by the scientists who modeled it. Its authors described it as “a high-emission business as usual scenario,” meaning that it was at the high end of emissions resulting from no climate policy….you know, like China. The use of that label, however, was taken to mean, by those wanting to create climate change panic, that high emissions were “business as usual,” and what was an unlikely worst case scenario became the basis for most advocacy reporting.

There are dozens of studies published every year using the outdated worst case as the baseline thanks to this deliberate or careless confusion. One says that “Business-as-usual will lead to super and ultra-extreme heatwaves in the Middle East and North Africa.” Yet business is NOT “as usual” as it was envisioned more than ten years ago. Current solar prices are below what the model predicted they would be in 2050, Coal use has dropped in recent years. The emissions levels RCP 8.5 was based on would require the world to increase coal use per capita by about 700% from today’s levels. That’s obviously not going to happen.

How much money that the U.S. doesn’t have will be spent on speculative policies based on hyping a model that is no longer valid? How many businesses will be harmed, jobs lost, and family assets diminished? Why don’t journalists ask House and Senate members, or the loudest climate change policy advocates, to explain what RCP 8.5 and why it is being used as the basis for such measures as cancelling the Keystone pipeline?

They don’t ask because they don’t know what the RCP 8.5 is either.

Meanwhile, one of the few climate scientists who hasn’t lost his head and maintains a rational perspective, Bjorn Lomborg, has a new book, “False Alarm: how climate change panic costs us trillions, hurts the poor, and fails to fix the planet.” He isn’t a climate change denier—he just thinks panic-based policymaking is irresponsible. He also likes debunking climate change propaganda like…

Lomborg: “We constantly hear Micronesia, the Maldives or Seychelles or something is going to be flooded and they’re only like a metre or two metres above sea level…What happens is most of these islands are coral islands, so they have actually occurred because they break off dead coral when there’s storms and wash it ashore. That accretes to the island and makes the island higher. At the same time, of course, a sea level rise makes the island lower. But it turns out that at least for now, and probably in the foreseeable future, the accretion is higher than the sea level rise.”

Lomborg: “If you take a graph of how many people die from climate related disasters, we have good data for that for the last 100 years. In the 1920s, about half a million people died each and every year from climate disasters. A lot of them were floods and droughts, especially in China and India that you’ve never heard of. What’s happened since then is that it’s declined dramatically. So in the 2010s, we were down to 18,000 deaths, so about 96% reduction in deaths. And last year, it was down to 14,000 or so in 2020. And in 2021, we don’t obviously have the whole year yet, but it looks like 2021 is set to be even lower at about 6000.”

Lomborg: “We’ve actually seen that wildfire has been declining in amount of burnt area pretty much every year since 1900…Overall, Australia for instance had one of its lowest burns ever. It used to burn in the early 1900s about 12% of the area of Australia every year. It went down to about 6-8%, typically in the early 2000s. In 2019/20 it burned a little less than 4%.”

No, facts don’t matter during The Great Stupid…unless we make them matter.

27 thoughts on “On Climate Change Fearmongering”