Don Maddox died. He was 98, and the last surviving member of a country music family and band you probably never heard of. Ken Burns told some of the story (above) of The Maddox Brothers and Rose in his fascinating documentary “Country Music.” They were important, they were successful, they were famous, and nobody under–what, 80?—remembers them. These stories fascinate me, and depress me. I’ve got to stop thinking of “Ozmandias“…it’s not healthy…

My name is Ozymandias, King of Kings;
Look on my Works, ye Mighty, and despair!
Nothing beside remains. Round the decay
Of that colossal Wreck, boundless and bare
The lone and level sands stretch far away.”

1. Someone should be fired for this, but the culture at this company has clearly curdled beyond easy fixes. Kyle Rittenhouse, standing trial for his life in his teens, took the stand yesterday (something O.J. wouldn’t do) and told his version of the chaos that ended with him shooting three people and killing two. He broke down sobbing at one point, so whoever is in charge of the Miriam-Webster twitter account quickly issued this: 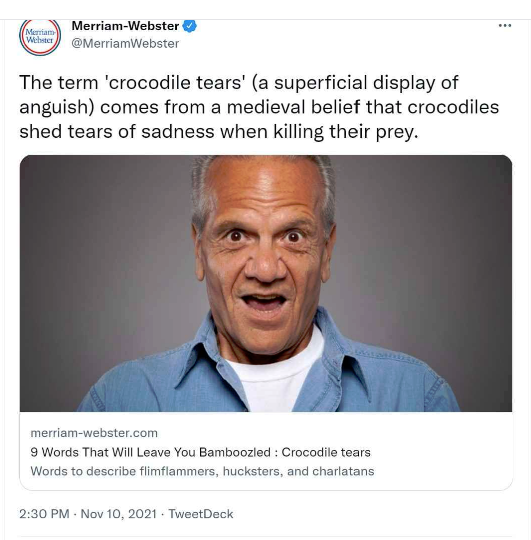 Apparently the company wants to project an image of being run and staffed by cruel, biased assholes.

2. And speaking of assholes...ABC’s revolting late-night host Jimmy Kimmel used his show—I really don’t want to meet people who approve of this left-pandering creep enough to watch him more than once—to blame “sexism” and “racism” for recent polls (I know, I know) showing Kamala Harris with approximately the same level of popularity as sciatica: 28%, the lowest of any VP within memory. This, of course, was Harris’s excuse when she completely bombed as a candidate for the 2020 Democratic nomination. The best reason to ban Critical Race Theory and its variations from the schools is to avoid teaching rising generations black Americans that whatever their failures, shortcomings, misfortunes and mistakes, it’s always racism’s fault. A more destructive mindset I cannot imagine.

Harris, as should be obvious, has low polling scores because there is nothing to like about her except her color and lady parts. She’s a ruthless opportunist and hypocrite, she’s incompetent, she’s obnoxious and smug, and she literally slept her way to the (almost) top while posing as feminist. She has, in my professional assessment as stage director, negative charisma—worse than Mike Pence (which is hard), worse than Hillary.

Over at The Hill, Joe Concha concludes that though “she was supposed to be the one-term president’s successor while becoming the first woman and the first woman of color to capture the White House…one has to wonder how Kamala Harris even remains on the ticket in 2024, regardless of who the nominee might be.” Oh, she’ll be on the ticket because the Democrats know that Kimmel and other race-baiters will attack if she isn’t. The dilemma serves them right. A party with a duty to find and present for the public’s approval the best available leaders to keep America prosperous and strong, and it picked a back-up POTUS with no ability or qualities to justify her elevation other than skin color and X chromosomes. And they really thought they could get away with it! What despicable contempt for the citizenry.

3. Flashback to how pro athletes used to be tre..The Major League Baseball Basic Agreement with the Players Union is up on December 1, and the two sides have to agree on minimum salaries, free agency rules and a lot else, with billions of dollars, and maybe the sport itself, in the balance. It’s billionaires arguing with multi-millionaires, and a strike or lock-out, which could happen, will be greeted with no sympathy at all for either side.

This is a good time to recall how the game got in this mess. Until the system was over-turned by an arbiter’s decision in the Seventies, baseball players were owned by the teams that signed them as teens, unless they were sold or traded. Their choice was to accept what the team offered, or quit..and no other team could sign them if they did. Even the greatest players had to work as insurance salesmen or as hardware clerks to feed their families for six months out of the year. Colin Kaepernick recently made the ridiculous comparison between being a current day NFL players and slaves, infuriating Left and Right simultaneously, but such a comparison, though still hyperbole, could have been used with some justification by baseball stars of the past.

Here, for example, is the reply Stan (“The Man”) Musial got from his team when he asked for a raise in in 1943, and threatened to hold out if he didn’t get it: 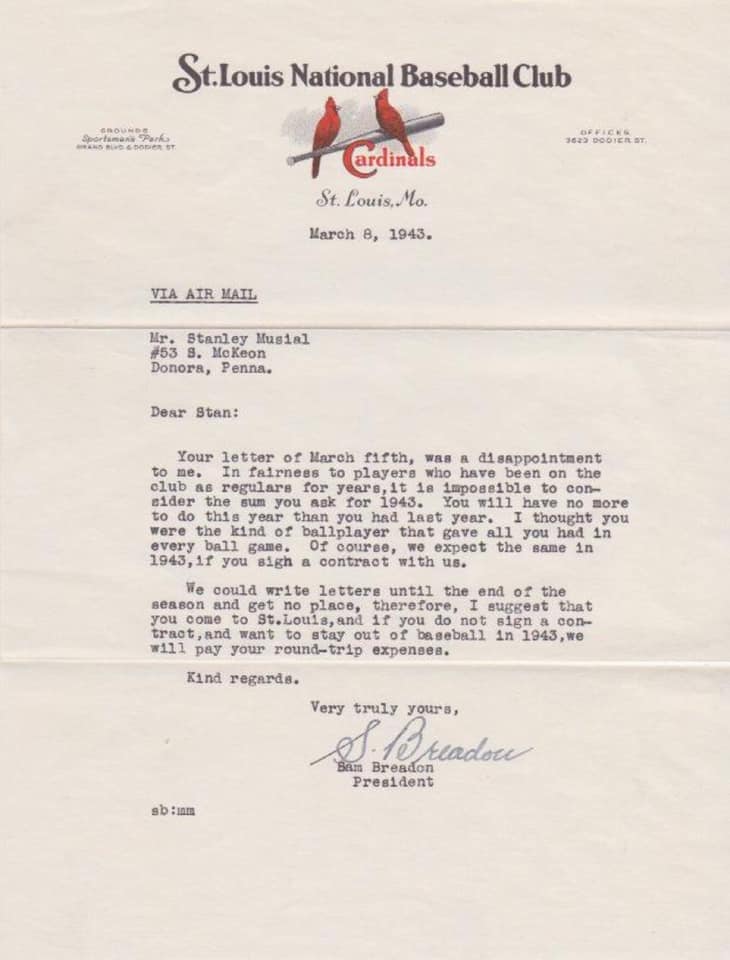 In 1943, Musial was paid $6,250. That’s a bit less than $94,000 a year today. He won the MVP Award and led the league in batting, on-base percentage, slugging, total bases, hits, doubles, triples, games, and plate appearances. In the next five years Musial would win two more MVP Awards and lead the Cardinals to two World Series titles. Of course, in the process he made a lot more than $94,000 for the Cardinals.

4. Oh, great, this is just what I needed today. From Curmie, theater teacher and scholar, comes this latest example of the culture falling apart in chunks. Students were “offended” by a Shakespeare satire that has been around for years, “The Complete Works of William Shakespeare (revised),” and they wanted to revise the revision so it was more politically correct. (This is, as Curmie points out, a licensing violation that schools get in trouble over. ) The instructor said, in essence, “Fine, you don’t want to do the play as written, then the production is cancelled.” Now the students say he made them feel “unsafe,” and he’s suspended by the school.

5. But the pros are just as bad.…A new production of the Sondheim musical “Into The Woods,” set to be co-directed by “Monty Python” cartoonist and film auteur Terry Gilliam will no longer be staged at the Old Vic. Why? Because some of Gilliam’s personal opinions about life, politics and society made the staff “uncomfortable.” For example, Gilliam has previously described the MeToo movement as a “witch hunt”—no, it’s a hypocritical weapon that is mostly used against conservatives, while powerful liberls, like say, just to pick a name out of a hat, Joe Biden, are immune—but Terry is welcome to his version, though not in great Britain. Gilliam also said that there were many “decent people” who were “getting hammered” as the industry grappled with sexual abuse. That is true.Last year, Gilliam told The Independent he was “tired of white men being blamed for everything wrong with the world”. In the same interview he said: “When I announce that I’m a black lesbian in transition, people take offense at that. Why?”

John Cleese has made similar points, but made them funnier. Gilliam also recently defended Dave Chappelle.