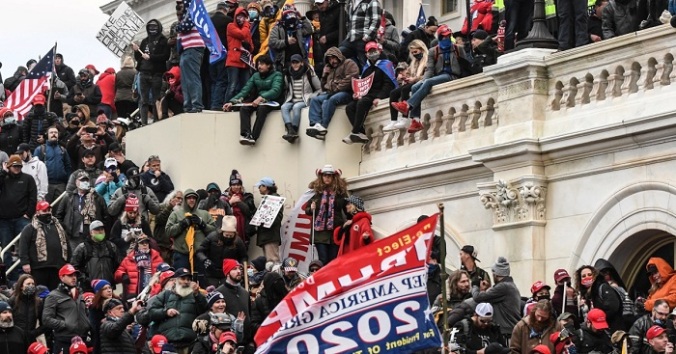 It is certainly appropriate to analyze and carefully consider the context and causes of the January 6 riot. Doing so, however, does not require the extended hyping, spin and deceit that we have been subjected to by Democrats, Trump-o-phobics and the news media for a full year, culminating in a contrived “anniversary” today. Over the past year, we have heard absurd comparisons of the one day riot to the bombings of September 11, 2001, Pearl Harbor, and maybe Darth Vader’s destruction of Alderaan—I don’t know, I didn’t read every hysterical screed on the topic.

Today’s retrospective overkill in the New York Times, for example, occupies four full pages in the A Section, with seven of the 24 containing at least one riot-related article. Pearl Harbor brought the U.S. into World War II, crippled the Pacific fleet and cost almost 3000 lives. 9/11 ushered in a new era of struggles against Muslim terrorists, also took 3000 lives, and profoundly affected the economy, privacy, civil liberties and politics. And January 6? It provided Democrats with a useful narrative to use to try to neutralize Donald Trump, and opened a new door to criminalizing the Right. The riot never threatened to overturn the election results at any point. It never even delayed the Congressional certification of those results, nor could it.

Nonetheless, it would be helpful to examine the reasons the January 6 riot occurred, and I find it incredible that I haven’t seen a single balanced and ethically objective analysis anywhere. Typical of what I have seen is yesterday’s op-ed by The New republic’s contributing editor Osita Nwanvetu. The Times headlined it using a rare form of dishonesty, advancing a lie by denying the lie: “Trump Isn’t The Only One To Blame.” Trump certainly shares a large portion of responsibility for the riot, but since he neither led the mob to the Capitol nor participated in the riot himself, he obviously wasn’t the “only one to blame.” But the politicians and “journalists” who are terrified of him have worked tirelessly to embed that false impression.

Who and what are “to blame” for the ugly events of a year ago? Who isn’t at fault? Here is the Ethics Alarms list. If you know of another equally non-partisan and unbiased analysis, please let me know. I haven’t seen it.

We might as well start with Trump, though this list isn’t in order of accountability. Trump’s assertion that the election had been “stolen” and that he actually won was unforgivable. He had every right to challenge vote totals as had been done before, but as a sitting President, he was obligated to tread especially carefully. Never before had an incumbent challenged the election result that defeated him.

Knowing what the lunatic fringe among his supporters were like, it was irresponsible in the extreme for him to address the Trump fanatics who had come to Washington, D.C. to protest the certification of the election. I assume that Trump didn’t know that there was a plan in the works to storm the Capitol; Trump deserves the benefit of the doubt, though he seldom gets it. However, as a New Yorker piece by David Rohde argues, his protestations bore some resemblance to Henry II’s lament, “Who will rid me of this meddlesome priest?,” that inspired his knights to assassinate Thomas Becket.

Should Trump, as President, have made a public appeal for the rioters to cease and desist? He should have and theoretically could have, but I understand why he didn’t. Unless his statement was carefully phrased, calling off the mob would make it look as if he controlled the mob, and Trump doesn’t do “carefully phrased.” He was damned if he tried to end the riot, and damned if he didn’t.

Here Trump’s “best people” failed him and the nation. Again.

As Ethics Alarms mention not too long ago, Gen. Burnside’s subordinates restrained him from ordering yet another futile assault on the Confederate position at the Battle of Fredericksburg after the previous attempts had led to a slaughter of Union troops. Ivana, Kushner, Trump’s sons, Melania,Mark Meadows, the Cabinet—all of them should have stopped him from his rash and dangerous course, even if it meant duct-taping the President to a chair. There is no question in my mind that equivalent interventions have occurred in the White House throughout our history; we just don’t know about them. (I was once physically restrained when, as an autocratic director in charge of a production, I was insisting on a dangerous and foolish course of action. The producer physically restrained me and countermanded my orders. I’m grateful for it.

The incompetent response of the Capitol Police and other authorities.

The Defense and Justice Departments and the D.C. mayor’s office knew well in advance that there was a danger of some of the protesters trying to breach the Capitol, but they were sure the law enforcement officers available were adequate to handle and problem. They weren’t. The FBI underestimated the number of protesters, predicting a maximum of 20,000, which turned out to be less than half the number that arrived. The Capitol Police didn’t stand their ground at the perimeter or at the Capitol itself; some even invited protesters inside. The D.C. mayor, a serial incompetent, was inexplicably slow to request additional troops from the D.C. National Guard. The Attorney General waited too long to order elite FBI units into the Capitol. The Pentagon, thinking about public relations and avoiding the appearance of politicization, held back. Capitol Police Chief Steven A. Sund announced his resignation the day after the riot, which is not the usual course when someone in charge has done a sterling job. It was reported that the Capitol Police had turned down offers of additional support from the National Guard and the FBI.

This puts the riot, or at least the extent of it, squarely in the realm of moral luck. There was no reason for Trump to believe that a mob, even a large one, would be able to breach the Capitol itself, and it shouldn’t have been able to do so if the organizations responsible for preventing such a mess had done their job competently. Had they performed as they should have, there would be no rehashing of the riot today, and the most Donald Trump would be blamed for would be his poor judgment and big mouth.

There is never an excuse for a riot, and this one was especially mindless, destructive and stupid. What exactly was the mob trying to accomplish? It had to know that it couldn’t possibly reverse the election results or take over Congress. Nor was it equipped to try. Like all riots, it was a tantrum, and an expression of anger and discontent. It was neither an “insurrection” nor an instance of treason, which is why neither of those crimes have been charged nor can be.

Yet today’s coverage of the January 6 festivities or whatever you call them on the local ABC affiliate here is titled “Insurrection.” The word is used regularly in news stories and pundit columns, as a deliberate attempt to misrepresent the event. Typically, the same reporters and pundits who throw that characterization around will complain about conservative “misinformation” regarding last January 6. That takes a lot of gall.

However, the mob was guilty of major rioting, and that’s bad enough.

There are more culprits to come in Part 2, as well as a list of who and what isn’t at fault…

48 thoughts on “Responsibility For The January 6 Capitol Riot, Part I”