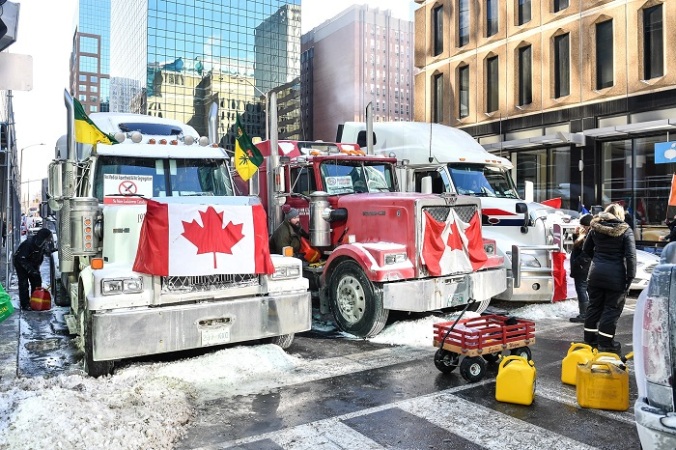 Lest we forget about those truckers….

Vladimir Putin going nuts took an unwelcome spotlight off Canada’s Justin Trudeau, who had found himself in ethics zugswang while dealing with the popular “Freedom Convoy.” Feminist Naomi Wolf found his assumption of “emergency powers” to risk a slippery slope to a police state. Ethics Alarms commenter Glenn Logan, in his Comment of the Day, was more sympathetic to Trudeau’s plight (as am I), prompting a two-part lesson in Canadian democracy from one of the Ethics Alarms commentariat’s eminent Canadians, Humble Talent.

“The First Amendment, and whatever the Canadian equivalent is (however weakly codified) does not protect actions that interfere with lawful commerce or disturb the peace to the point of mischief.”

Canada also has a constitution, although ours wasn’t predicated on the same base narrative as America’s. As an outsider looking in, America’s constitution is almost paranoid in nature, usually you don’t draft the founding documents to a nation’s governments under the auspices of governments being tyrannical and specifically with an emphasis on protection from that tyranny. I make no negative values judgement there…they work, in a stiffly rugged way. To highlight the differences between Canadian and American constitutional theory: Where the founders wrote “life, liberty and pursuit of happiness” in America’s declaration of independence, Canada’s founders instead wrote in “peace, order, and good governance”.

Our Canadian constitution is more malleable, and over the years, it’s been broadly re-imagined. Instead of enumerated amendments to the constitution, in 1982, Canada codified our rights in a portion of our constitution called “The Charter of Rights and Freedoms”.

Guarantee of Rights and Freedoms

1. The Canadian Charter of Rights and Freedoms guarantees the rights and freedoms set out in it subject only to such reasonable limits prescribed by law as can be demonstrably justified in a free and democratic society.”

Basically a this-is-not-a-suicide-pact line, it was further expanded on with the Oakes test, which I wrote about here.

2. Everyone has the following fundamental freedoms:

First on the list, exactly where it should be.

[It is me, your host, back again, briefly. The Oakes test, which Humble mentioned and discussed on his ow excellent newsletter on substack, was created by the Supreme Court of Canada in the 1986 case of R v Oakes. The test interprets section 1 of Canada’s Charter of Rights and Freedoms, which states that rights are guaranteed, “subject only to such reasonable limits . . . as can be demonstrably justified in a free and democratic society.” Thus the government must establish that the benefits of a law outweigh its negative impact, as in violation of a Charter right.

Humble Talent continued in his next response to Glenn, who had written in part, “The Oaks Test  seems somewhat similar in construction to what we call “strict scrutiny.” In effect, though, it seems to work more like our “intermediate scrutiny” test…To my mind, this is all very Canadian and appropriate to what I understand of their governing ethics.”]

My take is slightly different. Our standard is absolutely and obviously different, but with some obvious recent exceptions our government, I think, is more mindful about our rights than yours, and so our government is more likely to succeed at an Oakes test. How many constitutional strict scrutiny cases do American courts hear every year? Look back at that chart, there were only about 100 Oakes calculations in the last 30 years. Your government is one of extremes, your left is further left than our left, your right is further right than our right, and it’s a cutthroat competition. I think the reason you have so many constitutional cases isn’t a testament so much to the strengths of your laws, but the character of your governments, who tend to try a more “what might I get away with?” approach (read into that whatever party affiliations you want) with something between very little and no respect for your constitution.

Glenn: “My entire view of the matter in Canada with respect to the invocation of the Emergencies act, just like the confinement of citizens for mere infection by the Rona in Australia has been essentially a shrug. Their rules, their problem.”

This has been my view as well. Australia is so weird to me. I’ve said this before, I don’t understand the culture. I don’t live there, I don’t have any friends there. I would love to have a discussion with an Australian, because as abhorrently as I think they’ve been treated, all those sick camps, all the lockdowns and restrictions and mandates, all that loss of freedom… I wonder if they’re actually supported by a vast majority of Australians.

The thing is, throughout this pandemic, there have been two broad groups of people: The terrified, and the annoyed. There’s a spectrum from there, some people were more scared than others, some people were more annoyed than others. But when you consider the likelihood of either group to call in and speak to their congressperson, up until recently, I think that the scared people were more vocal, and in politics, the squeaky wheel tends to get the grease. Once that changed (And you’re welcome, on behalf of Canada’s Truckers, of which I am not one, but was there in spirit with), you started to see all kinds of mandates ad restrictions roll back. Regardless of how you felt about the lockdowns, my impression is that those politicians were playing to their impression of their bases.

Which is why Australia confuses me. They’re still going full bore. It’s an election year. And those protests looked well attended. Are we being fed a very disproportionate view of Australia’s truth, or is Australia’s government chock full of idiots? I have no idea.