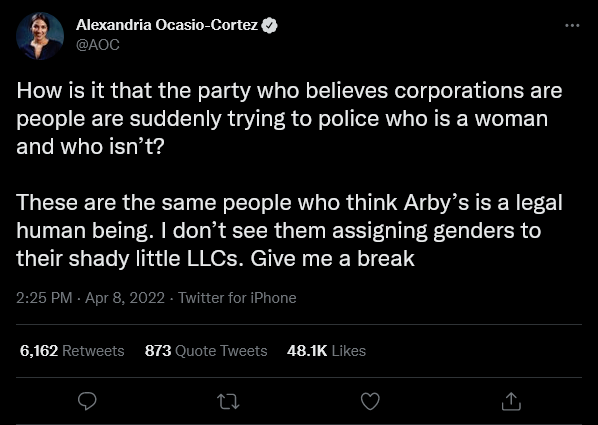 I’m not going to play out the entire TV game show trope, but you get the idea. That was the first thing that jumped into my head when I read the astounding AOC tweet above from yesterday, that would have justified many other standard Ethics Alarms categories: Unqualified Elected Official, Ethics Dunce, Unethical Tweet, Unethical Quote, or just KABOOM!, since it is head-exploding that a Democratic lawmaker would either have such an infantile understanding of corporate law or, in the alternative, deliberately try to confuse the generally ignorant public with such per se misinformation.

I will point out now, as a tangential matter, that Twitter hasn’t removed the tweet nor suspended AOC’s account, though her statement is straight-up false, and a more consequential and undeniable falsehood than most of those resulting in the platform’s removing commenting privileges from others.

Fact: Neither the Republican Party nor any lawyer, judge or non-ignoramous “believes corporations are people.” OAC’s outrageous framing on an important legal doctrine has become popular on the Left, from demagoguing politicians to propagandizing comics like Stephen Colbert ever since the Supreme Court’s ruling in Citizens United v. Federal Election Commission in 2010, which confirmed that the rights of free speech applied to associations of people as well as people themselves.The real issue is “corporate personhood,” a concept accepted by the U.S. Supreme Court, the government and the legal system at least since the 1886 Supreme Court case of Santa Clara County v. Southern Pacific Railroad Co.

Legal scholars have pointed out, correctly, that the statement in the opinion asserting that corporations were due most of the the same rights as people under the Fourteenth Amendment was dicta (a general statement that was not at issue and thus not the equivalent of precedent), but this is one of many examples in legal history of a principle seeping into law, tradition and society because it was unavoidable. There is still no claim in that SCOTUS opinion nor any other that “corporations are people.” That is an absurd interpretation of the real doctrine.

If legal associations of people don’t have the rights of the people in those organizations, then corporations couldn’t sign contracts. Giving corporations  legal rights allows corporations to sue and to be sued, makes taxation and regulation more direct and simple as well as facilitating  other complex transactions that would otherwise involve, in the case of large corporations, thousands of people. It protects the individual rights of shareholders. Without Bill of Rights protection for corporations, the government could seize their properties on a whim, or dissolve companies it didn’t like. Companies and organizations would not be protected from unreasonable searches and seizures under the Fourth Amendment; churches and religious organizations could be made to act in direct violations of their foundational beliefs. The government could tax entities it found annoying at destructive rates. This really isn’t hard. A free society doesn’t work if corporations and associations don’t have Equal Protection, Freedom of Association, Freedom of Speech, Freedom of Religion, and many other Constitutional Rights the Founders designated for individuals.

Most of the controversy over corporate personhood has come from critics on both the liberal and conservative ends of the ideological spectrum who have objected to sloppy way the Court came to adopt it. Dissent­ing in Wheel­ing Steel Corp. in 1949, mainstay Court liberals Justice William O. Douglas and Justice Hugo Black complained,

“[In Santa Clara] [t]here was no history, logic, or reason given to support that view. … [T]he purpose of the [14th] Amend­ment was to protect human rights-primar­ily the rights of a race which had just won its free­dom.”

Douglas and Black argued that the ques­tion of corpor­ate person­hood should be decided by the people, not the Supreme Court, a frightening prospect when elected fools like AOC would be guiding them. In the 1970s, it was an arch conservative on the Court, Justice William Rehnquist, who in a dissent, ques­tioned extend­ing corpor­a­tions polit­ical rights, writing, “those prop­er­ties, so bene­fi­cial in the economic sphere, pose special dangers in the polit­ical sphere.”  Stating, as Rep. Ocasio-Cortez does, that support for corporate personhood (which is what she would have tweeted if she weren’t either ignorant or lying) is a partisan belief is as false as the rest of her tweet. Incredibly, she made this stupid statement while Democrats are cheering the Disney corporation’s public opposition to Florida’s Parental Rights Bill, and accusing Florida Gov. DeSantis of threatening Disney’s rights by raising the possibility of removing the company’s favored status in the state.

When individual rights can’t and shouldn’t be extended to organizations, the Court has declined to do it. For example, the Supreme Court doesn’t recognize a Fifth Amendment right against self-incrimination for a corporation. Corporations and organizations do not have privacy rights under the Privacy Act of 1974, because the statute refers to any “individual,”  “a citizen of the United States or an alien lawfully admitted for permanent residence.”

And so we return to the metaphorical TV game show, “Idiot Or Con Artist!” Is AOC truly this ignorant? If so, it is one more example of a serious problem in our republic: we have officials advocating, debating and making laws who don’t understand what our current laws are or mean. This is an indictment against our civic literacy, our education system, our culture, our information media, Congress and our system of government itself. A law degree can’t be a requirement for a citizen to be an elected representative, but there is still an duty to possess the knowledge essential to doing any job competently. If a member of Congress really thinks that our laws hold that “corporations are people,” that member’s positions on any issue are suspect.

In the alternative, if Ocasio-Cortez knows her characterization is false, and nonetheless poisoned the public’s comprehension of the law by tweeting it—note that it had 48,000 “likes”—then she, like so much of her party and the news media that advances its interests, is deliberately making the public more confused and misinformed than it already is—all the better to dominate them and take away their rights and interests.

Either way, she is a disgrace, and an ethics villain.