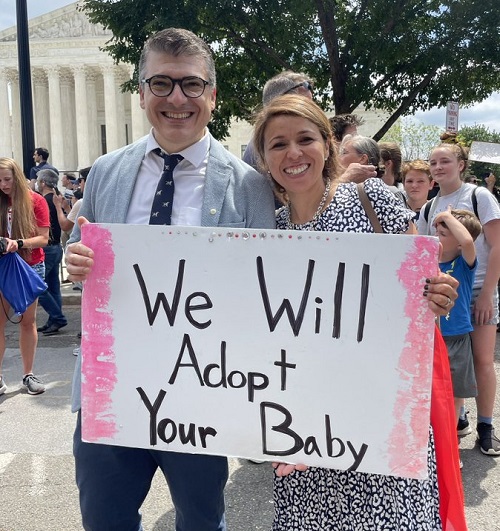 The couple above and their sign outside the Supreme Court building triggered a series of telling attacks on the option of abortion after a photo of them was tweeted and went “viral.” Mark Hamill, the “Star Wars” star who has supported himself of late by being the voice of “The Joker” in animated “Batman” features, led the way with this incoherent but snarky tweet:

Attacks on adoption and those advocating it as a non-homicidal alternative to abortion are one more manifestation of how the Dobbs decision has unmasked so many of the pro-abortion progressives who had been hiding behind the deceitful “choice” trope. Now we are hearing advocacy for up-to-the-moment-of-birth abortions, and rationalizations for the procedure ranging from economic benefits to the economy and avoidance of disruptions to women’s ambitions, to arguments that children in poverty, with health problems or in unstable families are better off if they never draw a breath. This long-delayed candor will be, in the long run, a beneficial development. Finally abortion ethics can be debated acknowledging the unethical priorities and values that have been used to sanctify it for so long.

I see now that he attack on adoption was inevitable. Examine these recent abortion advocacy pieces: “Conservatives love to paint adoption as the solution to abortion. Adoptees aren’t buying it,” and “The Insidious Idiocy of ‘We Will Adopt Your Baby’ Memes.”

The first is a collection of straw man arguments—for example, the point is not that adoption is a “solution” to abortion, but rather an alternative to ending the life of an unwanted unborn child. Nobody suggests that carrying a child to term is easy, cheap or without risks, but preserving a human life trumps those matters in any ethical equation. The article also concentrates on the rejection of international adoption by a couple that “never wanted kids” but who had been convinced that adoption was the “moral” thing to do. If they didn’t want children, it’s hardly surprising that they would find any adoption process overly burdensome. Moreover, if they didn’t want children it was unethical for them to try to adopt a child.

Then Vanessa Taylor’s essay turns into another exposé on the many perils of international adoptions, from crooked agencies to emotionally damaged children. That’s fascinating (our son is an international adoptee, from Russia) but completely irrelevant to the issue of abortion limits in the U.S. The writer of this collections of deflections and skew arguments concentrates on a single adoption critic, Tory Bae, who herself was adopted from South Korea and apparently thinks she would have been better off never being born, or something. Bae is prone to saying things like “Adoption is trauma,” “My [good] adoption was an outlier,” and “For us adoptees, it’s not your right to buy us to build your family.”

Well. First, again, international adoption is not germane to domestic abortions. Second, good adoptions are not an exception to the rule, and the article cheats by concentrating on international adoptions, which have risks and complications domestic adoptions usually do not. Third, even assuming (arguendo!) that “adoptions are trauma,” I contend that the trauma is considerably less than that of being vacuumed and scraped out of a womb.

Finally: what makes Tory Bae the authority on this issue? She’s affirmatively weird: she didn’t want children but tried to adopt. She is a U.S. citizen who admits that she had loving parents, but opposes adoption. I want to know if she would rather have been erased from existence rather than having the opportunity to make a living being an anti-international adoption activist. How many other adoptees would prefer extermination to life, however challenging? I’m pretty sure how my son would answer that question, and he was definitely only rescued from abortion by pure luck, in the form of a single mother who thought her son should have a chance to live.

“The Insidious Idiocy of ‘We Will Adopt Your Baby’ Memes” takes off from the couple holding the sign above. Apparently they aren’t really in a position to adopt, which makes the “we” part of the sign dishonest. Nevertheless, it doesn’t change the validity of the sign’s general assertion at all: adoption is an option, and an ethically superior alternative to abortion. If the author of the article can rebut that, great; instead, Magdaline Taylor resorts to deflection, cherry-picked statistics and ethics-free arguments. Examples:

Complete fantasy? No pregnant women can find good homes and loving parents for the child they don’t want to raise?

Nobody says it is. Adoption is an ethically, morally and legally superior alternative to killing unborn children. Taylor’s statement is like saying that working for a living isn’t a substitute for the right to have taxpayers pay your bills.

Pregnancy causes homicide? No. Adoption “solves” one problem and one problem only: it provides a route for a nascent human being to have the opportunity to live, and in the ethical balancing process, that is a major benefit.

And the horrors of being rubbed out before birth? Typically, the article never acknowledges that there is a small, growing human organism involved in every abortion. “Means little”? To my son, his mother allowing him to be born meant a lot. In fact, it meant everything.

So the strategy of the pro-abortion activists includes denigrating adoption and the people who are willing to raise a child as their own. If you can accurately judge the legitimacy of a cause by the character and values of the people who advocate it—and often you can—this is damning evidence.

3 thoughts on “Next Up In The Desperate Push To Rationalize Abortion: Attacking Adoption”