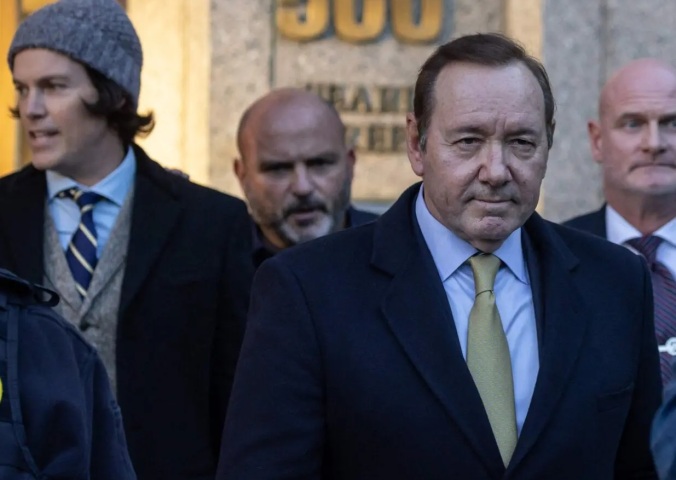 Yesterday, a federal jury in Manhattan found actor Kevin Spacey not liable for battery in actor Anthony Rapp’s  lawsuit accusing Spacey of climbing on top of him and making a sexual advance in 1986, when Rapp was 14. This was the accusation that ended Spacey’s acting career five years ago, in the wake of the Harvey Weinstein feeding frenzy with #MeToo Valkyries searching the landscape for villainous men to destroy. Actual justice was only a small part of the mission; mostly it was a power play, a mass cancellation project designed to bring down as many powerful men as possible and to provide accusers-who-must-be-believed with their skin to wear as trophies.

Of course, once such hobgoblins of little minds as consistency required a necessary ally of the Left like Joe Biden to also suffer the consequences of his repeated sexually harassing ways, the fever broke. Still, lots of genuine villains were metaphorically killed along the way, many who “needed killin'” as Texans are wont to say, like Weinstein, surely, and also Matt Lauer, Louis C.K., Bill O’Reilly, Bill Cosby, Rep. Blake Farenthold, CBS chairman Les Moonves and others. More were just swept out in “The Terror” for no good reason, like poor Sen. Al Franken, or without the accusations against them being substantiated of tested in court. In the majority of the cases, the once powerful men were replaced by women, and that was part of the mission as well.

Spacey was always an unusual case. He was gay, his accuser was out of the distant past, and there was little evidence of the incident being claimed against him (it was similar—but still had more evidence to support it, and what doesn’t?—to the manufactured smear against Justice Kavanaugh during his confirmation hearings). Spacey’s mistake was to suddenly play his gay card as part of a strategic public apology when he had spent most of his career denying that he was gay. This foolish strategy of “Ew, how dare you accuse me of being something so icky!” turning into “Hey, I’m one of you, gay and proud of it!” when it became convenient backfired spectacularly. Hollywood gays, who have real power, set the gears in motion to have Spacey cancelled but good.

It didn’t help the actor that he appears to have been a long-time bully and power-abuser who had made a lot of enemies on all of his projects. Suddenly many alleged past victims of his unwanted advances, over a dozen of them, came forward after Rapp, and though none of them have been proven yet, Spacey was made an industry pariah. He was kicked off his hit show “House of Cards,” and even cut out of a major film after it had been completed. Spacey has not had an acting job since Rapp accused him.

Is that fair? Of course it’s not fair. I strongly suspect that Spacey has been a serial sexual harasser at least, because the proliferation of accusations once the dam breaks is one of the surest signs of a harasser unless the accused is a politician, in which case you never know. Still, accusations alone should not ruin anyone’s life.

Kevin Spacey was destroyed because a movement was intent on flexing its muscles, and the bigger the stuffed and mounted head on the wall, the better. “I’ve learned a lesson,” Spacey testified, “which is, never apologize for something you didn’t do.” Right. It’s too late for Spacey to learn that lesson, but if his destruction conveys that vital principle to others when the woke cancel mob comes a-calling, the ashes of his career may have some long-term benefit yet.

5 thoughts on “How Does Kevin Spacey Get His Career Back?”