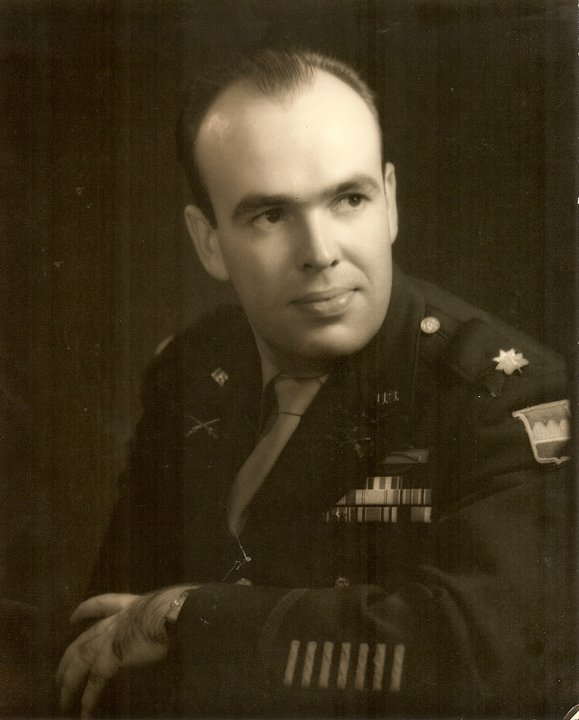 My father, now in Arlington National Cemetery, would have really liked Steve-O-in NJ’s post. the second of this weekends’s Comment of the Week. The great irony of his life was, as he once mentioned, that he hated war, but had a natural aptitude for it. Jack Sr. never boasted about his many war exploits, forcing us to drag them (definitely not all, though) out of him over nearly 6 decades. Nevertheless, he was more proud of fighting the Nazis in Africa and Europe than of anything else in his life, except, perhaps, of being a good father, unlike his own father.

Dad used to imitate FDR’s famous “I …hate… war!” speech (“My wife Eleanor hates war…”) , which he felt was ponderous and insincere—The Roosevelts all liked war, he believed—and said more than once that anyone who didn’t hate war was a lunatic. (This was just one of the many reasons he detested General Patton). But my father never hesitated to display reminders of his participation in the victory over Hitler and his minions.

We had beautiful, brilliant red curtains separating our play room from the laundry area in our basement in Arlington, Mass.when my sister and I were kids; it wasn’t until long after I had moved to the Washington, D.C. area that I learned that my mother had cut them out of the giant Nazi flag my father had brought home as a trophy. He felt that using the red portion of the menacing flag as a cheerful decoration in the most humble part of his all-American home was a nice, final, private “Bite me!” to the evil losers.

Here are Steve-O’s reflections on Armistice Day, prompted by the introduction to this post…

103 years ago, the guns finally fell silent at the eleventh hour of the eleventh day of the eleventh month, ending the greatest conflict to date, known as the Great War in Europe, as World War One here. The war that was supposed to end by Christmas 1914 had dragged on for more than four years, shaken civilization to its core, and thrown down no fewer than four empires, leaving chaos in their place. It had also killed six million and badly damaged a generation.

The world thought another war like this must not, could not ever happen again. In memory of what had happened, the allied nations proclaimed Armistice Day a year later, including the red poppy as the symbol of the fallen, the two minutes silence, and the continued hope for world peace.

Here’s the dirty little secret, though, the allied nations, weary of war and afraid of another one, turned their back on the problems left unresolved at the end of World War One. They made a few half-hearted attempts to deal with them, like the poorly organized Allied intervention in Russia to stop Communism before it took root, which accomplished nothing. For the most part, however, they either just looked the other way or threw up their hands. Turkey mopped up what was left of the Armenians and forced Greece into a population exchange that destroyed thousands more lives, and the allies just nodded. The Soviets attempted to conquer Poland, but they found themselves thrown back by a nation not inclined to give up the freedom it had just won under the leadership of the military and political genius Josef Pilsudski. France and the UK didn’t do or say anything. Ireland erupted in violence, and the UK all too quickly concluded a peace that left it embarrassed and Ireland bankrupt. Let’s also not forget the abandonment of the Finns, the Ethiopians, and the Austrians to tyrannical aggression. The major nations were too busy trying to come up with lofty promises and ways to prevent there from ever being a war again: the Washington Naval Treaty, signed with a smile by the Japanese and promptly violated, the Locarno Treaties, which were quickly ignored, and the Kellogg-Briand Pact, which supposedly outlawed war, and is still technically in effect, but which was ignored from its inception, and actually reads like a bad joke in hindsight.

Against all this moralizing and paralysis by fear, it made perfect sense to commemorate a holiday keeping alive the continued hope that there would somehow be a perfect peace and nothing like World War I would ever happen again.

While the west kept hoping and praying, tyrants rose and took what they wanted. Soviet bayonets shepherded the Baltic states into the USSR. Hitler pulled Austria into Germany proper via the Anschluss. The Japanese marched into Manchuria and turned it into Manchukuo. Finally came the craven surrender at Munich, and Neville Chamberlain’s self-important proclamation that
“My good friends, for the second time in our history, a British Prime Minister has returned from Germany bringing peace with honour. I believe it is peace for our time. We thank you from the bottom of our hearts. Go home and get a nice quiet sleep.”

Less than a year later Nazi tanks moved on Poland, and France and the UK, caught flat-footed and weak from years of putting their hopes on disarmament and diplomacy, had no choice but to take action. You know the rest.

Armistice Day became Remembrance Sunday in the UK, in order not to interfere with wartime production, and so it has remained. In the US, WWII Navy vet Raymond Weeks, who I’m guessing most folks haven’t heard of, and who I myself hadn’t until a few moments before this writing, first conceived of the idea of expanding Armistice Day to honor all veterans, and not to focus solely on WWI as WWII wound down. He presented a petition to that effect to General Eisenhower, and the first such event was held in 1947. Representative Ed Rees, from Eisenhower’s home state of Kansas, presented the bill changing the designation and purpose of the holiday, and Eisenhower, now President and no doubt remembering Rees’ petition, signed it into law. Rees would go on to lead the celebration in his home town of Birmingham, AL, and nationally, until his death in 1985 at the age of 76. I wonder if he knew of, or was inspired by, Italian-American publisher Generoso Pope’s successful push that made Columbus Day a national holiday.

Since then, our veterans have stopped Communist aggression in Korea, fought in Vietnam, held the line in the Cold War, freed Kuwait in the Gulf War, and intervened in the Balkans, in Lebanon, in Grenada, in Panama, and more than a few other places, all in the cause of freedom. They are still fighting in the War on Terror, even though the tyrannies of Saddam Hussein and the evil of Osama bin Laden, Abu Musab al-Zarqawi, and now Abu Bakr al-Baghdadi are long since history, thanks to their efforts. Every one of them put his life on the line for this nation, the cause of freedom, and the hope that a few more people in this world would be able to live in a just peace, and every one of them, from the only three men who held or ever will hold the rank of General of the Armies or Admiral of the Fleets all the way down to the soldier, sailor, marine, airman, or guardsman who just took his oath at 18 yesterday, is worthy of this nation’s honor.

A very few talk sometimes about “reclaiming” Armistice Day as a day of hope and prayer for peace and reflection on just how bad war is. I can only say that is at best misplaced idealism given the history and really doesn’t make sense. It makes sense that we Americans, in the wake of WW2, shortly after the draw that was Korea (although the aggressors wound up with less territory than they’d had at the beginning), and with the Cold War looming on the horizon, finally came to the realization that world peace wasn’t coming any time soon, and it wasn’t coming any time not so soon either. However, we had a huge number of veterans, including still a fair amount from WWI and even a few who’d served in both world wars, who had given their all to preserve freedom from tyranny. All of them, not just those who battled in the trenches of France, deserved to be remembered, and it makes sense to remember them on the day concluding the United States’ first major international war fought for the freedom of others.

Peace? Peace is like romantic love, often idealized, mostly hope and memories, often pursued long after it becomes clear it isn’t going to be achieved, and often coming at too high a price for too small of a return. The peace of disgrace, the peace of oppression, the peace of the grave, none of these are preferable. It’s our veterans who keep the rest of us from ending up in those gray wastes masquerading as peace.
This probably makes me sound like President Trump, but, God bless the veterans who served, God bless the veterans who are serving now, and God bless America! Happy Veterans Day!