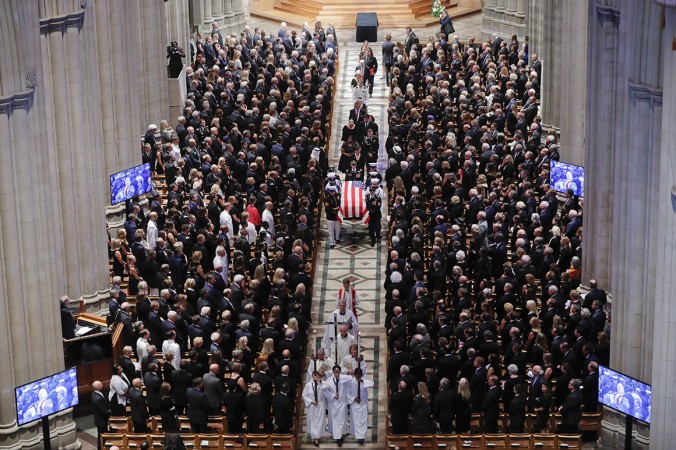 Ethics Alarms has spent a lot of time and space trying to clarifying the term hypocrisy, which like another term abused here by commenters, ad hominem attacks, is more often  misused than used properly. Hypocrisy is conduct that proves insincerity and  dishonesty (or, Hanlon Razor fans, stupidity), in which one’s conduct does not match one’s contemporaneously stated belief regarding what one’s conduct should be, under circumstances that suggest that the objective of the words was to deceive, by falsely claiming dedication to principles the speaker in fact does not possess or aspire to. Thanks to the orgy of hypocrisy that the Washington, D.C. funeral service for the late Senator John McCain this weekend deteriorated into and the equally hypocritical reporting on it, we now have a perfect example of hypocrisy for the ages.

Let’s start with the fact that a theme of the service was McCain’s alleged dedication to civility. The fact that the Senator openly planned his own funeral to settle scores and act on old grudges is the ultimate rebuttal of that claim. It was undeniably uncivil to dis-invite the President of the United States from what would otherwise be a display of unified and bi-partisan Washington community respect for a departed public servant. That was an insult, and intended as one. Insults are not civil. The retort to this is that the President was not civil to McCain, which is true. However, if the professional duty of civility is waived by another’s breach of it, then there is no such duty.

McCain’s own daughter launched the proceedings with her own uncivil rant, saying in part, “We gather here to mourn the passing of American greatness—the real thing, not cheap rhetoric from men who will never come near the sacrifice he gave so willingly, nor the opportunistic appropriation of those who lived lives of comfort and privilege while he suffered and served.” Later, she added, “The America of John McCain has no need to be made great again, because America was always great.”

In addition to being uncivil—I have never been to a funeral that consisted even in small part of veiled insults and attacks on someone else, and Marc Anthony aside, have always understood that using a funeral service for this purpose is boorish and unethical—the attacks on the President, like Meagan McCain’s, were cowardly. The man (and the office) being savaged wasn’t present, and the crowd was united in its hostility to the target. George Washington’s 110 Rules of Civility cover that kind of conduct neatly:

89. Speak not evil of the absent, for it is unjust.

Leading up to the ceremony, the news media were equally dishonest in describing McCain. Dana Milbank of the Washington Post declared that McCain  “never forgot that political opponents are not his enemies, and that there are things more important than winning elections.” Funny, it seems pretty clear that McCain regarded Donald Trump as his enemy, treated him as such, and made certain that his admirers would carry out his vendetta. The description also was historical revisionism, at least through the news media’s own assessments. After fawning over the “maverick” when he was challenging George W. Bush, journalists turned on McCain and discovered his dark side when he ran against a man the entire journalism establishment had decided to elect President. The Pew Research Center found that between the Republican National Convention’s close on September 4, 2008 and the final presidential debate on October 15, McCain’s media coverage was more negative than positive by a 4-to-1 ratio, and pundits like Milbank were writing statements like this one, from New York Times columnist Maureen Dowd, who said ,“Even some of McCain’s former aides are disturbed by the 73-year-old’s hostile, vindictive, sarcastic persona.”

When it was George W. Bush’s turn to speak—his family had enhanced its stock with McCain by barring the President from Barbara Bush’s funeral—one of his accolades was that McCain “detested the abuse of power”, though not, apparently, sufficiently to do the right and responsible thing and give up power when he was no longer well enough to discharge his duties. Is an octogenarian Senator with aggressive brain cancer still fit to serve in the U.S. Senate for almost a year as his condition deteriorates? To ask the question is to answer it, yet McCain insisted on keeping his power to the end, in part so he could continue undermining the President of the United States. Let’s say McCain “detested the abuse of power” by others. 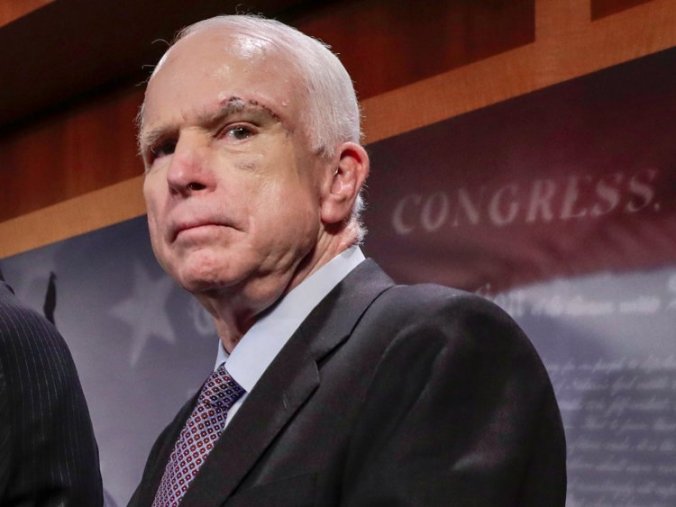 As I already have noted here more than once, Senator John McCain’s ethical course was to resign from the Senate even before he got his brain cancer diagnosis, and definitely afterward.  He is a courageous and admirable man in many ways, but the one of the hardest duties in life is to give up power and influence, and say goodbye when the time comes. The senator is not alone in failing this ethics test, indeed he is in distinguished company: FDR, Babe Ruth, Frank Sinatra, Muhammad Ali, Lawrence Tribe,  Clarence Darrow, too many Supreme Court justices, including a couple current ones, and lots of U.S. Senators. Nonetheless, it is a failing, and in McCain’s case the failing has been compounded by his regrettable decision to use his status as a dying man to exploit the reluctance of critics to address the wrongdoing of the afflicted. He has decided top settle old scores in his final days. The conduct is petty and erodes his legacy, as well as the respect he had earned in his long career of national service. It is too bad.

Much of McCain’s self-indulgence is directed at President Trump, whom he is now insulting with mad abandon, banning him, for example, from the Senator’s funeral in advance. This is vengeance, nothing more ennobling, for Candidate Trump’s outrageous disrespect toward McCain and other prisoners of war when Trump said that he did not regard them as heroes. McCain revenge is thus a display of the kind of non-ethics Donald Trump believes in: tit-for tat, mob ethics, hit ’em back harder. The political theme since November 2016 is that the President’s enemies cannot resist lowering themselves to his level, or in some cases, below it. Strike-backs from beyond the grave are particularly unbecoming, but McCain is seething, and apparently can’t muster the other cheek, graciousness, or statesmanship. Too bad. END_OF_DOCUMENT_TOKEN_TO_BE_REPLACED

“Who ARE those guys?”

CNN this morning showed a reporter asking giggling college students and others to identify photos of Tim Kaine and Mile Pence. Many of them couldn’t and the ignoramuses and the reporters had a good laugh about it. Then a CNN panel and Carol Costello, beaming themselves, discussed the phenomenon, which isn’t remotely funny.  Why are so many Americans ignorant about their own elections and government? Why do those Americans think their ignorance is amusing? Why does CNN encourage such ignorance by refusing to present it as the disgrace to democracy that it is?

Apparent, according to a survey, a full third of potential voters can’t identify either Vice Presidential candidate. That’s nice. One reason, of course, is that the news media has spent so little time focusing on either of them. Huh. Yet Sarah Palin’s candidacy was covered as a threat to the civilized world by these very same organizations. Well, that’s because her running mate was so much older than the 2016 can..actually, McCain wasn’t significantly older was he? How can the qualifications of  VPs be so irrelevant now, but so newsworthy then?

I’ll stop being coy. The answer is that journalists have no integrity. END_OF_DOCUMENT_TOKEN_TO_BE_REPLACED