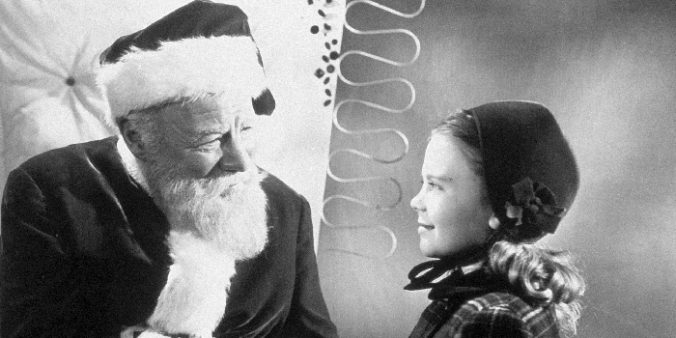 (The Introduction is here.; Chapter I is here.;Chapter 2 is here.)

Kris’s rave reviews as Santa in the Thanksgiving Day Parade are so good,  Doris hires him play Santa at Macy’s flagship New York City store on 34th Street. He agrees, which is strange, when you think about how busy he should be at this time of year, supervising the elves and all. If he really is Santa, or even if he thinks he is, taking the job in New York is irresponsible.

His supervisor gives him a list of toys to “push”—toys that are overstocked. “Now, you’ll find that a great many children will be undecided as to what they want for Christmas. When that happens, you suggest one of these items,” Kris is told. “You understand?”

Kris says he understands, but later makes it clear in his comments to a co-worker, that he has no intention of “pushing” the merchandise.:

“Imagine…making a child take something it doesn’t want…just because he bought too many of the wrong toys.That’s what I’ve been fighting against for years!”

That being the case, there is exactly one thing Kris needs to do. He needs to quit. What he cannot do, and must not do, and has a clear ethical obligation not to do, is to accept a job when he has no intention of doing what the job requires. This is a sales job. If Kris doesn’t want to sell, then he will be accepting a pay check under false pretenses. This isn’t noble conduct, as the film would have you believe. It’s unethical conduct. It’s wrong.

Kris needs to put himself on his own naughty list. END_OF_DOCUMENT_TOKEN_TO_BE_REPLACED