The Introduction is here.

The movie tells us right at the start that 1) the charming old man in the white beard can’t possibly be Santa Claus, and 2) that he’s nuts. That is, he tells adults who are paying attention this as soon as he starts complaining to a New York City storekeeper that his window display has the reindeer mixed up: “You’ve got Cupid where Blitzen should be. And Dasher should be on my right-hand side. And another thing…Donner’s antlers have got four points instead of three!”

Never mind that: why would he call Dunder “Donner”? The “real” Santa wouldn’t. Though the original version of the poem got the names right (we know it’s Blixen and not “Blitzen” because it rhymes with Vixen), various editors, transcribers and  the author himself kept changing the names in subsequent printings. Dunder became “Donder” and eventually “Donner,” which is a meaningless Anglicizing of “Dunder.”

Santa Clause, aka Sinterklaas wouldn’t be confused: he named the beasts. He’s correcting the shop-keeper while passing along a misnomer?

Well, enough of that. The next scene shows Kris encountering the Macy’s Thanksgiving Day Parade Santa pre-parade. He instructs him in the use of his whip on the reindeer! In the German Santa mythology, the jolly old elf used the whip on naughty children, but nowadays, using a whip on either kids or reindeer is pretty much excised from Santa’s methods, and should have been in 1947. It’s an unethical image… 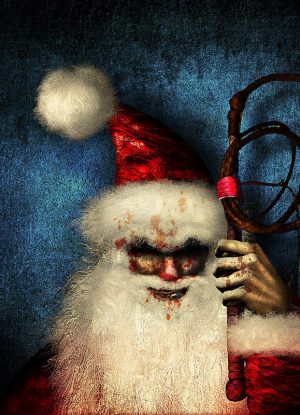 …even though artists have worked hard to confuse us….

No, an ethical Santa Claus wouldn’t use a whip. He also wouldn’t put a poor old guy with a drinking problem out of work during the holidays, but that’s what Kris does next. He smells liquor on the costumed Santa, and shows no mercy:

“Don’t you realize there are thousands of children… lining the streets waiting to see you… children who have been dreaming of this moment for weeks? You’re a disgrace to the tradition of Christmas… and I refuse to have you malign me in this fashion. Disgusting!”

Then he tracks down Doris Walker, who is in charge of the parade, and gets the man fired. That’s just mean; there’s no way around it. I bet a lot of Macy Santas have had a few nips before and during the parade, and so what? How hard is it to say “Ho Ho Ho”?

Kris manages to get Drunk Santa’s job, having single-handedly gotten him sacked, no pun intended.

Why is Kris, if he’s the real Santa Claus, hanging around New York City and moonlighting in the Macy’s parade when the big night is just around the corner? This is no time for a vacation or boondoggles. If he’s really Santa, he’s goofing off, and he has the gall to tell a temporary parade Santa that he’s risking disappointing children!

Kris is not off to a good start.