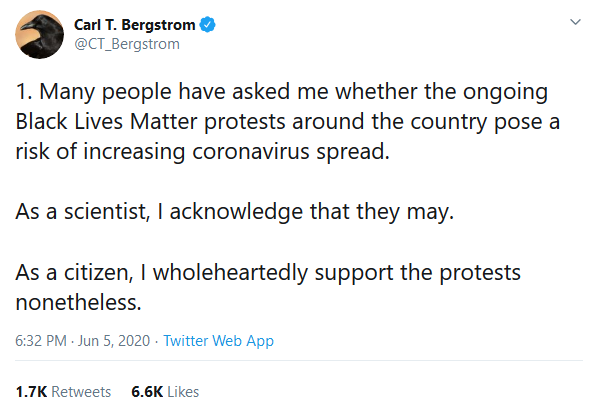 One could also call this an ethical tweet, as it neatly unmasks the hypocrisy of the scientific community as well as the self-serving myth that scientists are squeaky-clean objective and do not bend their pronouncements to partisan and political motives.

Bergstrom is a science star. Atheoretical and evolutionary biologist and a professor at the University of Washington in Seattle, he has been a vocal critic of low-quality or misleading scientific research. Now he is proving how we get it.

In another tweet, he writes, “We are having difficult but vital conversations about whether public health professionals can support the #BlackLivesMatter.protests during a pandemic. I’m unhappy to see these defaulting to utilitarian calculus rather than considering deontological or virtue ethics perspectives.”

That one’s pretty funny. The reason policy-makers are told that they must follow in lockstep the pronouncements of “experts” is that scientists et al. are not calibrating facts, recommendation and conclusions based on biases, personal preferences and non-factual considerations. In fact, that is the very reason policy makers must make the trade-offs scientists cannot, or should not. Now, struggling to find a way out of the obvious verdict of hypocrisy, Bergstrom is extolling “virtue ethics.” The problem is that virtue ethics also requires balancing and prioritizing among the virtues. Now we know that Bergstrom, among others, calibrates his recommendations according to his own political and ideological preferences. Go to work to continue earning income and care for one’s family? Not important enough to justify the risk. Gather in church to serve one’s spiritual needs? Nope. Attend a funeral of a loved one to express grief and respect? Not worth the risk. Protest being forced to accept an economic Armageddon and the suspension of civil rights to prevent virus-triggered fatalities that have been tolerated in the past without installing such draconian measures? Selfish and irresponsible.

Mass demonstrations in the streets out of anger and opportunistic political motivations, leading to millions of dollars of property destruction, human misery, deaths of bystanders and police, looting and riots in furtherance of vague objectives and generalities?

Sure! Now that’s worth it! END_OF_DOCUMENT_TOKEN_TO_BE_REPLACED